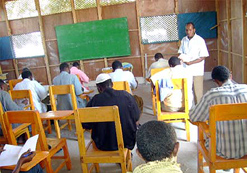 Kismayo University’s first crop of
graduates, who got through years of study
under severely trying circumstances, want
more Somalis to realise that education is
the “ladder of life”.
(Image: SomaliTalk)

Five years after a local charity opened a university in the war-torn city of Kismayo, south-central Somalia, the first degrees have been awarded.

“I want our people to know that education is the ladder of life and that every step of development that a community makes depends on the level of the community’s education,” one of the 27 new graduates, Qoole Qowden*, told Irin News.

“I am delighted to have completed four years of study during which we underwent unimaginably difficult circumstances.

“I am hopeful that I will get a job since I now possess the required knowledge and skills. I will also try to transmit what I learnt to every Somali who is ready for it,” he said.

Like much of south-central Somalia, for the past few years Kismayo has been controlled by al-Shabab, an Islamist insurgency fighting to topple the country’s weak transitional government.

Kismayo University has 200 students, mostly from Middle and Lower Juba regions where, for many years, secondary school was the highest level of learning available.

Since it opened, local sources said, the university has helped reduce the recruitment of youth into fighting groups.

Education in Kismayo has long been one of the casualties of the region’s conflicts and frequent changes of administration.

Several schools in the city have been converted into makeshift homes or stores, forcing talented teenagers to seek educational opportunities in Mogadishu, the semi-autonomous region of Puntland, the self-declared independent republic of Somaliland or in neighbouring Kenya.

Quruxlow Shaakle*, a resident of Kismayo, said: “I have lived here for the past 33 years and education has been my greatest worry because as a parent, and I am sure all other parents agree with me, no one wants their child to end up as a militiaman or be used to fuel clan divisions.

“For a long time, only well-off parents could send their children across the border to Kenya to get an education – for poor families like mine, this was not possible.”

Shaakle urged other Somali families to focus on their children’s education “because that is how we can put away the gun and seek peace – otherwise wars, famine and hardship in our country will continue”.

The 27 who received degree certificates on 5 August 2010 were from two faculties, education and business administration, according to a university official, who added that 32 others obtained diplomas. The university also has an Islamic law faculty.

The official said most of the graduates had already secured jobs in local telecommunication firms, remittance or money-transfer banks, and in other businesses across Kismayo.

“Some are part-time teachers in different schools,” the official said, adding that the university had requested heads of companies in the region to consider Kismayo University graduates during their recruitment drives.

* Not their real names