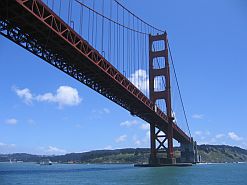 A new bridge that connects Mozambique
Tanzania has been unveiled.
(Image: Wikipedia)

The new Unity Bridge linking Tanzania and Mozambique is set to stimulate economic activity between the two Southern African countries and improve living standards in the region.

The facility was opened by Presidents Jakaya Kikwete, of Tanzania, and Mozambique’s Armando Guebuza on 12 May.

The 720m-long and 13.5m-wide road bridge runs over the Ruvuma River, enabling goods to be transported more effectively. It will also mean that traders from the neighbouring countries will have easy access to each others’ markets.

“This bridge will strengthen our brotherly ties and boost trade between our people. I believe it will yield positive results in the near future, including easing transport and promote development in many areas,” Kikwete said, as Tanzania’s Daily News newspaper reported.

Both nations are funding Unity Bridge’s construction bill of about US$30-million (R226-million), part of which has been paid.

Daily News praised the construction of the bridge as a huge milestone in its editorial. The new development would consolidate political, social, and economic relations between Tanzania and Mozambique, the newspaper commented.

“…The edifice must not be allowed to become a white elephant. It should be utilized to the maximum for the benefit of Mozambicans and Tanzanians and the rest of Africa at large.”

The two nations must “take full advantage” of the abundant economic opportunities offered by the bridge, said Daily News.

It’s expected that it would attract more economic investments mostly into Tanzania’s regions of Mtwara, Lindi and Ruvuma, and Mozambique’s Cape Delgado and Pemba.

Although roads leading to the bridge now need to be constructed, a 5km stretch of tarred road has already been laid down from both countries’ sides.

Now the Tanzanian government is looking for funds to upgrade and join the road from the village of Mangaka, in the south of the country, to the Unity Bridge.

Realising the dream of founding leaders

Unity Bridge is a realisation of a vision shared by the countries’ first presidents, the late Julius Nyerere and Samora Machel. They mooted the idea of a bridge across the Ruvuma River in 1975, soon after Mozambique was liberated from Portuguese colonial rule.

The idea lingered for about three decades until Joaquim Chissano and Benjamin Mkapa, the respective former presidents of Mozambique and Tanzania, decided to set aside funds from their budgets to construct the bridge.

“These leaders took bold decisions by allocating our scarce resources to the project. It was not an easy decision to take up the project and implementing it,” Kikwete said at the ceremony.

A one-stop border post will be established on the bridge to facilitate the flow of people and goods between the two countries, enabling businesses to trade with minimal hindrance.

The border facility will also enhance security and immigration controls between the countries. Security personnel operating in the post will include employees of the Tanzania Revenue Authority.