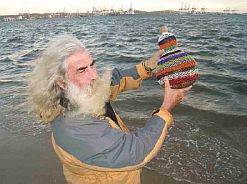 Before the expedition sets off, the calabash
is filled with water from the Indian Ocean. 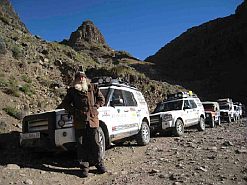 The team travelling along the cold, rugged
mountain roads of Lesotho. 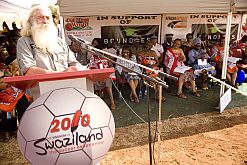 The expedition is guided by renowned adventurer Kingsley Holgate, under the theme Nature, Culture and Community.

The 11-member team, which includes Holgate’s wife Gill and son Ross, is on a four-month journey that will take them through nine Southern African countries – South Africa, Botswana, Angola, Namibia, Zambia, Zimbabwe, Mozambique, Swaziland and Lesotho – and cross the tip of the continent from east to west.

As with all his expeditions, Holgate is carrying a beaded calabash holding water from the Indian Ocean. The water will be poured into the Atlantic at the mouth of the mighty Orange River in the Ai-Ais/Richtersveld Transfrontier Park in August 2009.

The same calabash has accompanied Holgate on all his previous expeditions and has carried water from Cape Point to the Nile Delta. It has also travelled around the entire circumference of the continent during the famous Africa Outside Edge expedition.

The purpose of the expedition, said Holgate, was to boost Southern Africa’s magnificent parks, as well as to help remove the barriers that have not only prevented communities from benefiting from resources in the area, but also blocked the natural migration routes of wildlife.

“This journey will not only be focused on the parks,” said Holgate, “but more importantly, the communities that live adjacent to these parks. We want to make them aware of the resources that they have as well as showing them that they are key to the survival of these parks.”

It was from the latter conservation area that the expedition set off in May 2009. A number of humanitarian projects were there to interact with people present, including Holgate’s One Net One Life campaign, which distributes mosquito nets to women and children around Africa.

Other initiatives active on the day were the Teaching on the Edge project, which will organise donated mobile libraries for rural schools around the transfrontier parks, and the Right to Sight campaign which will give reading glasses to those who desperately need them.

These will travel with Holgate all the way, interacting with communities in each of the seven transfrontier areas, carrying out their humanitarian work, promoting the message of conservation, raising awareness around the forthcoming 2010 Fifa World Cup, and donating health and sports supplies.

The expedition is currently in Zimbabwe, having arrived there earlier in June via the Sango border post in the Chiredzi district in south-east Zimbabwe. They have already covered three of the seven conservation areas – the Maloti Drakensberg, the Lubombo, and the Great Limpopo parks.

Zimbabwe’s director-general of parks and wildlife management, Morris Mutsambiwa, was elated by the visit of the expedition, saying that it would draw attention to some of Gonarezhou’s most impressive attractions such as the Chilojo Cliffs, a well-known raptor nesting area, and its population of almost 6 000 elephants.

The local communities of Chilo and Davata will benefit from the donation of soccer kit.

A transfrontier conservation area or peace park is one that straddles the borders of two or more countries and is collectively managed by the governments or relevant authorities of the countries involved. It encloses at least one protected area within its boundaries.

Political or geographic boundaries are irrelevant to the peace park concept, as these areas are looked at rather in terms of their biological diversity and ecosystems.

Peace parks keep open the traditional migration routes of mammals such as elephant and wildebeest. These animals migrate according to the seasons to find better food and water to sustain their numbers, returning to their original area during the rainy season when vegetation is lush.

Peace parks also encourage tourism, regional economic development and goodwill between neighbouring countries, and they facilitate the movement of indigenous inhabitants of the area.