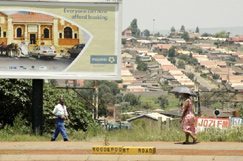 Botswana’s investment into Eassy
is finally paying off.
(Image: WIOCC  )

The dropping of broadband connectivity charges in Botswana has been directly linked to the East Africa Submarine System (Eassy) – an extensive undersea fibre-optic cable that went live in July 2010.

Some rate reductions are expected to come into effect from 1 April, while others may happen before then. BTA’s decree affects broadband internet, mobile termination and fixed termination prices.

ADSL charges are set to drop by 17%. “The new internet rates, according to the BTA, are a result of the government’s investment in the Eastern African Submarine System,” WIOCC, a group with a majority stake in the cable, said in a recent statement.

Botswana was one of the countries that connected to Eassy soon after it went live. The landlocked nation accesses Eassy’s high-speed services over terrestrial fibre networks that travel via South Africa and Mozambique.

The submarine cable’s landing stations in coastal areas Mtunzini and Maputo, of South Africa and Mozambique respectively, are the closest to Botswana. The 10 000km broadband cable stretches from Mtunzini to the Horn of Africa, and has connection stations along the East African coast.

BTA is one of the African state-owned groups that invested heavily in Eassy, pumping about US$100-million (R724-million) into the project.

Public telecommunication enterprises in South Africa, Zambia, Zimbabwe and Sudan are among others with a large stake in the venture.

Botswana will also connect to the West African Cable System (WACS) when it goes lives in mid-2011. The country’s government and neighbouring Namibia co-invested U$75-million (R543-million) in the 14 000km cable.

WACS is expected to shake up the internet industry in 15 African countries when it goes live. Its connectivity speed of 5.12 Tbps will be faster than Eassy’s current offering of 3.84 Tbps. Eassy’s speed capacity was upgraded from the initial 1.4 Tbps in August 2010.

Making phone calls in Botswana will soon be much cheaper. The three mobile phone service providers in the country – Botswana Telecommunications Corporation, Mascom Wireless and Orange Botswana – have been ordered to drop call-termination rates among themselves, which will have a positive impact on customer charges.

The authority ruled that fixed termination rates must increase by a cent every year until 2014. This is due to such rates being marginally below cost at the moment.

BTA believes that the service providers will continue making a good profit regardless of the market price drops. The BTA-owned Botswana Telecommunications Corporation has not been spared from the directives.