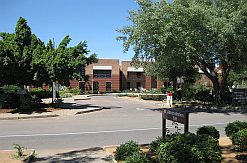 The University of Botswana’s admin block.
The new science institution will be the
second university in the country.
(Image: Wikimedia Commons) 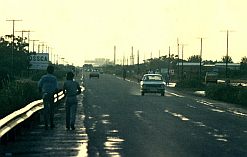 The main road through Palapye. The area
is due for renewed growth with the
construction of a science university.
(Image: Wikimedia Commons)

Construction on the long-awaited Botswana International University of Science and Technology has begun. Hopes are high that the institution, when complete, will be the educational pride of the country and eliminate the need for Batswana youth to leave the country to study elsewhere.

The project arose out of a 2005 United Nations Development Programme report, which called for more funding for science in Botswana.

The report, titled Harnessing Science and Technology for Human Development, found that Botswana was under-performing in the disciplines of science and technology, despite having all the equipment to conduct significant research.

The report also recommended that the country develop its own postgraduate programmes instead of sending its brightest thinkers overseas to study, thereby running the risk that they will not return.

Finally, the report acknowledged the severe toll that HIV and Aids has taken on the country, and recommended that Botswana protect itself against future epidemics by developing a core of expertise in health-related research and development, especially with regard to HIV and Aids.

The government of Botswana approved plans for the new facility a year after the report’s publication. It is the second university in the country, but will not duplicate courses offered by the University of Botswana. Instead, relevant courses will be moved to the science university.

The project has experienced a number of logistical delays. Early in 2008 there were electricity problems with South African parastatal Eskom, which supplies most of Botswana’s power. Eskom struggled to meet local demand at the time and was forced to cut down drastically on electricity exports.

Minister of Education and Skills Development, Jacob Nkate, also admitted that government had underestimated the scope of the project and had set an unrealistic date for completion. However, with construction now underway, the mood has changed to one of optimism.

The project is expected to create many jobs and put a stop to the importation of skilled personnel into top positions. It will thereby contribute to poverty alleviation, and boost regional economy.

“We have to develop a high quality university that we can market with pride to the whole of Africa,” said Nkate.

The new institution is situated in Palapye in the east of the country, about halfway between Francistown and Gaborone.

The 2 500ha of land on which it stands, according to Palapye headman Kgosi Raditanka Ntebele, is part of the Tswapong region, currently on the tentative list for inscription as a world heritage site. This holy ground is protected by the ancestors, he said, who make it impossible for anybody to climb the ancient Tswapong hills at night without angering them.

Government has averted any such potential incidents by consulting closely with the people of the area, a step lauded by Ntebele.

The chief was particularly impressed with the sensitivity and professionalism displayed by government officials who exhumed burial sites. The remains of 15 Batswana were reverently moved to Palapye’s Mmaphula cemetery.

No stranger to Africa

The state-owned China Civil Engineering Construction Corporation, based in Beijing, has won the contract for phase one.

The company is involved in a number of domestic and international projects and is no stranger to Africa, having already worked on the renewal of roads, railways and other infrastructure in Uganda, Botswana, Nigeria, Zambia and Tanzania, and stadiums in Rwanda and Djibouti.

Stage one, worth US$61.5-million (R495.6-million), is funded by the government of Botswana and is proceeding without a private partner. Spanning two years, this phase includes the construction of the administration block, halls of residence for nearly 300 students and houses for 70 staff, laboratories, auditoriums, a student centre and book shop, a clinic, and classrooms.

The new university’s vice-chancellor, Ghanaian civil engineer Kweku Bentil, speaking to the Gaborone Rotary Club in February 2009, revealed that the second stage will see a private partner coming on board. This phase involves maintenance and further construction of a research park, among other structures, while the final phase entails the addition of a shopping mall, schools, and a golf course.

The first batch of 256 students is expected to walk through the doors in 2011. The university will operate initially with four faculties – Engineering, Technology, Science and Business. Study will focus on engineering, mining, geology and basic sciences.

Later student intakes will increase to 3 000 and then to 6 000, with admissions accepted three times a year from all over the continent.

Bentil said he hoped the university would attract the finest minds from around the world into teaching and research positions, and produce graduates who are both technologically- and business-savvy, ready to step into any job.

The Botswana government spends millions each year to support the thousands of students at universities outside the country, added Bentil. “The science university can help reduce the number of such students and the cost of their training.”