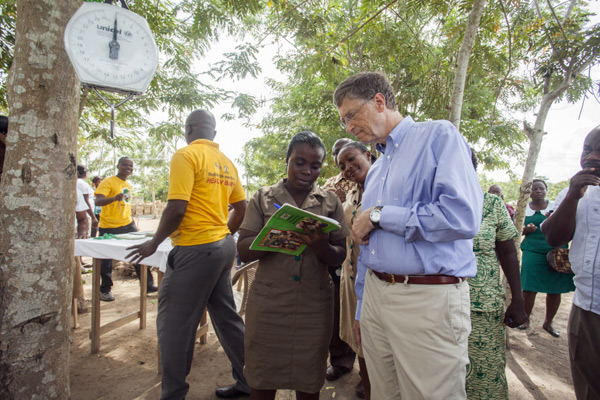 Bill Gates in Acrra, Ghana, in 2013. “A growing number of countries in Africa are building community health systems, which are extremely cost-effective,” he writes. (Image: Gates Foundation)

• Bill and Melinda Gates Foundation
(206) 709-3400
media@gatesfoundation.org
Note: If you are a member of the news media, please use the phone number or email address above to leave a detailed message. Include your name, press affiliation, phone number, questions, and deadline.

“Poor countries are doomed to stay poor.” That’s a myth Bill Gates passionately debunks. The founder of Microsoft, one of the richest men in the world and, today, co-founder – with his wife Melinda – of the Bill and Melinda Gates Foundation, Gates has released a letter that explains why pessimism about the future of poor countries holds back their development.

In previous years the Bill and Melinda Gates Foundation annual letter discussed the foundation’s work. In the 2014 edition of the letter, the Gateses chose instead to focus on three major global myths, erroneous ideas held by many in the world that hold back the upliftment of poor people everywhere.

The letter is in three parts, challenging three persistent myths about global poverty: that poor countries are doomed to stay poor, that foreign aid is a big waste, and that saving lives leads to overpopulation. Read the annual letter on the Gates Foundation website.

We bring you the full text of the first part of the letter, which specifically discusses Africa.

I’ve heard this myth stated about lots of places, but most often about Africa. A quick web search will turn up dozens of headlines and book titles such as “How Rich Countries Got Rich and Why Poor Countries Stay Poor”.

Thankfully these books are not bestsellers, because the basic premise is false. The fact is, incomes and other measures of human welfare are rising almost everywhere, including in Africa.

So why is this myth so deeply ingrained?

I’ll get to Africa in a moment, but first let’s look at the broader trend around the world, going back a half-century. Fifty years ago, the world was divided in three: the United States and our Western allies; the Soviet Union and its allies; and everyone else. I was born in 1955 and grew up learning that the so-called First World was well off or “developed.” Most everyone in the First World went to school, and we lived long lives. We weren’t sure what life was like behind the Iron Curtain, but it sounded like a scary place. Then there was the so-called Third World – basically everyone else. As far as we knew, it was filled with people who were poor, didn’t go to school much, and died young. Worse, they were trapped in poverty, with no hope of moving up.

Years later, I would see this disparity myself when I travelled. Melinda and I visited Mexico City in 1987 and were surprised by the poverty we witnessed. There was no running water in most homes, so we saw people trekking long distances by bike or on foot to fill up water jugs. It reminded us of scenes we had seen in rural Africa. The guy who ran Microsoft’s Mexico City office would send his kids back to the United States for checkups to make sure the smog wasn’t making them sick.

Today, the city is mind-blowingly different. Its air is as clean as Los Angeles’ (which isn’t great, but certainly an improvement from 1987). There are high-rise buildings, new roads, and modern bridges. There are still slums and pockets of poverty, but by and large when I visit there now I think, “Wow, most people who live here are middle-class. What a miracle.”

The global picture of poverty has been completely redrawn in my lifetime. Per-person incomes in Turkey and Chile are where the United States level was in 1960. Malaysia is nearly there, as is Gabon. And that no-man’s-land between rich and poor countries has been filled in by China, India, Brazil, and others. Since 1960, China’s real income per person has gone up eightfold. India’s has quadrupled, Brazil’s has almost quintupled, and the small country of Botswana, with shrewd management of its mineral resources, has seen a thirty-fold increase. There is a class of nations in the middle that barely existed 50 years ago, and it includes more than half of the world’s population.

Here’s another way to see the transition – by counting people instead of countries: 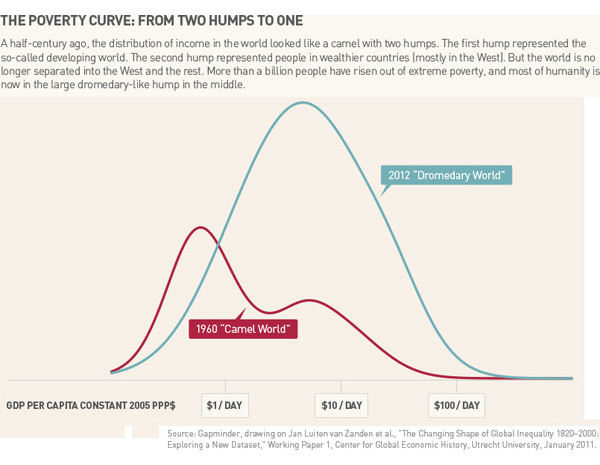 So the easiest way to respond to the myth that poor countries are doomed to stay poor is to point to one fact: They haven’t stayed poor. Many – though by no means all – of the countries we used to call poor now have thriving economies. And the percentage of very poor people has dropped by more than half since 1990.

That still leaves more than one billion people in extreme poverty, so it’s not time to celebrate. But it is fair to say that the world has changed so much that the terms “developing countries” and “developed countries” have outlived their usefulness.

Any category that lumps China and the Democratic Republic of Congo together confuses more than it clarifies. Some so-called developing countries have come so far that it’s fair to say they have developed. A handful of failed states are hardly developing at all. Most countries are somewhere in the middle. That’s why it’s more instructive to think about countries as low-, middle-, or high-income. (Some experts even divide middle-income into two sub-categories: lower-middle and upper-middle.)

‘Life in Africa never gets better’

With that in mind, I’ll turn back to the more specific and pernicious version of this myth: “Sure, the Asian tigers are doing fine, but life in Africa never gets better, and it never will.”

First, don’t let anyone tell you that Africa is worse off today than it was 50 years ago. Income per person has in fact risen in sub-Saharan Africa over that time, and quite a bit in a few countries. After plummeting during the debt crisis of the 1980s, it has climbed by two thirds since 1998, to nearly $2 200 from just over $1 300. Today, more and more countries are turning toward strong sustained development, and more will follow. Seven of the 10 fastest-growing economies of the past half-decade are in Africa.

Africa has also made big strides in health and education. Since 1960, the life span for women in sub-Saharan Africa has gone up from 41 to 57 years, despite the HIV epidemic. Without HIV it would be 61 years. The percentage of children in school has gone from the low 40s to over 75% since 1970. Fewer people are hungry, and more people have good nutrition. If getting enough to eat, going to school, and living longer are measures of a good life, then life is definitely getting better there. These improvements are not the end of the story; they’re the foundation for more progress.

Of course, these regional averages obscure big differences among countries. In Ethiopia, income is only $800 a year per person. In Botswana it’s nearly $12 000. You see this huge variation within countries too: Life in a major urban area like Nairobi looks nothing like life in a rural Kenyan village. You should look sceptically at anyone who treats an entire continent as an undifferentiated mass of poverty and disease.

The bottom line: Poor countries are not doomed to stay poor. Some of the so-called developing nations have already developed. Many more are on their way. The nations that are still finding their way are not trying to do something unprecedented. They have good examples to learn from.

I am optimistic enough about this that I am willing to make a prediction. By 2035, there will be almost no poor countries left in the world. (I mean by our current definition of poor.)2 Almost all countries will be what we now call lower-middle income or richer. Countries will learn from their most productive neighbours and benefit from innovations like new vaccines, better seeds, and the digital revolution. Their labour forces, buoyed by expanded education, will attract new investments.

A few countries will be held back by war, politics (North Korea, barring a big change there), or geography (landlocked nations in central Africa). And inequality will still be a problem: There will be poor people in every region.

It will be a remarkable achievement. When I was born, most countries in the world were poor. In the next two decades, desperately poor countries will become the exception rather than the rule. Billions of people will have been lifted out of extreme poverty. The idea that this will happen within my lifetime is simply amazing to me.

Some people will say that helping almost every country develop to middle-income status will not solve all the world’s problems and will even exacerbate some. It is true that we’ll need to develop cheaper, cleaner sources of energy to keep all this growth from making the climate and environment worse. We will also need to solve the problems that come with affluence, like higher rates of diabetes. However, as more people are educated, they will contribute to solving these problems. Bringing the development agenda near to completion will do more to improve human lives than anything else we do.

[1] Calculating GDP is an inexact science with a lot of room for error and disagreement. For the sake of consistency, throughout this letter I’ll use GDP per capita figures from the Penn World Table, adjusted for inflation to 2005 dollars. And for the sake of simplicity, I’ll call it “income per person.” [RETURN]

[2] Specifically, I mean that by 2035, almost no country will be as poor as any of the 35 countries that the World Bank classifies as low-income today, even after adjusting for inflation. [RETURN]