Hunger was the motivation for Uganda’s Phiona Mutesi to attend chess classes at a local church: she signed up because they also provided a bowl of porridge. Today, her story is being made into a Hollywood movie. 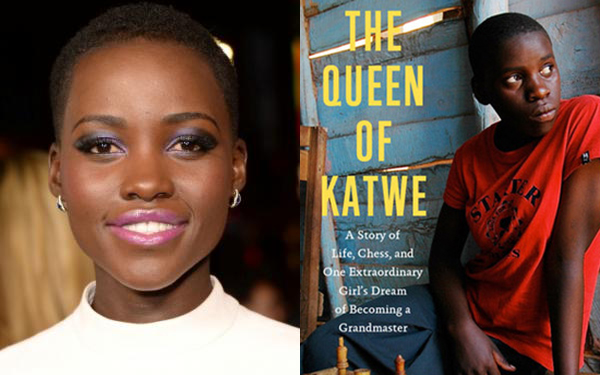 The rise of Uganda’s Phiona Mutesi from the poor streets of Katwe to international chess sensation is being turned into a Disney blockbuster starring Lupita Nyong’o and David Oyelowo.

In 2005, when she was nine years old, Mutesi crossed paths with the game in the slum of Katwe, in Uganda’s capital, Kampala. Players were introduced to chess at a church, and given a free cup of porridge.

“It was so interesting,” Mutesi told UK newspaper The Guardian of her introduction to the game. “But I didn’t go there for chess; I went just to get a meal.”

The hungry Mutesi started to plan her days around visiting the church, and ended up fuelling a passion for the strategic planning it takes to win a game of chess.

“She was really desperate for survival,” recalled coach and mentor Robert Katende of Sports Outreach Ministry (SOM) of his meeting with Mutesi a decade ago.

“I like chess because it involves planning,” Mutesi said. “If you don’t plan, you will end up with a bad life.”

All hail the queen

Mutesi’s afternoons are dedicated to chess. “She will either practice at school with friends or go to the SOM Chess Academy in Katwe and help coach Robert [Katende],” reads the profile on her website. “Phiona has a real passion for teaching the children.”

President of the Uganda Chess Federation Vianney Luggya said Mutesi had flourished, and had surpassed all expectations.

Mutesi competed in the Africa International Children’s Chess Tournament in South Sudan in 2009, and returned with a trophy. She has taken part in Olympiads in Siberia, Turkey and Norway, and she has a Woman Candidate Master ranking from the World Chess Federation.

The young player has also faced off against her hero, the Russian former world champion Grandmaster, Garry Kasparov. Her success has also inspired students in the US to start a chess tournament in her name.

The movie is based on the book by Tim Crothers, The Queen Of Katwe: A Story Of Life, Chess, And One Extraordinary Girl’s Dream Of Becoming A Grandmaster. It is being filmed in South Africa and Uganda, translated for the screen by Mira Nair.

Nair also directed a short documentary on Katende for the Nelson Mandela Foundation’s short film series, The Power of Words.

From 6000 pearls to just 1: Uganda. Excited to be back in East Africa to work with @MiraPagliNair on #QueenOfKatwe. pic.twitter.com/wruqunWbpa

It is believed that Oscar-winning actress Nyong’o is taking the role of Mutesi’s mother, Harriet, while Oyelowo is tipped to play chess instructor and mentor Katende, reported the African lifestyle portal, Okay Africa.

While filming in South Africa, Nyong’o took some time off to see South African comedian Trevor Noah on stage.

I was already having a great time performing in Johannesburg and then @Lupita_Nyongo dropped in and made my night. pic.twitter.com/eIJFbto1xm

Luggya said he hoped the movie would open doors for chess players across Uganda. “I think Ugandans realise that it is a brain game that can enhance their potential in all other aspects of life.”

An inspiration to other girls

Mutesi’s success has had a ripple effect, including inspiring young girls across Uganda to achieve their dreams. “Girls are always overlooked, even in chess,” Mutesi explained to The Guardian. “But I don’t think there’s any reason why a girl cannot beat a boy. It comes from believing in yourself.”

In 2013, she was honoured at the Women of the World Summit in New York City and awarded a $25 000 grant. “Phiona has been faithful to use the funds to speak at conferences, organisations and churches,” states her website.

When she held her first girls-only chess clinic, more than 400 young women attended. “The girls were not only taught chess but also encouraged by Phiona and invited professional women to pursue education and to delay marriage and children until after they finished school and began a career.”

From queen to Grandmaster

Mutesi would like to rise to the highest level possible in chess: that of a Grandmaster. But outside the game, she would like to improve the lives of children by becoming a paediatrician.

“Phiona, [and her brothers] Brian and Richard plan to go back to Katwe after they finish school to build a home to provide shelter, clinic care and education for the slum children,” reads her website.