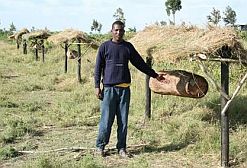 The beehive fence is simple and effective.
(Image: Save the Elephants) 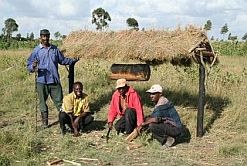 Members of the construction team beside
the beehive fence.
(Image: Save the Elephants)

A tiny creature is proving effective in chasing away earth’s biggest mammal – fences strung with beehives in Kenya form a barrier that African elephants are scared to cross, keeping them out of croplands.

The Save the Elephants organisation and zoologists from Oxford University have innovatively used a naturally-occurring phenomenon to protect fields once trampled by tuskers.

Oxford University researchers found in 2007 that elephants were frightened by the loud buzzing of African honeybees en masse, and that beehives – whether real or recorded – placed at strategic points could actually prevent the huge beasts from raiding fields in search of a snack.

A recording of an agitated hive caused all but one of 17 elephant groups tested to disappear in approximately a minute, eight of them within seconds.

This trial followed an earlier discovery by the same scientists, who in 2002 found that elephants will not approach acacia trees that contain African honeybee (Apis mellifera scutellata) hives.

The hive fence also solves the possible problem of elephant complacency. It is all very well to scare elephants away with bee recordings, but the highly intelligent animals would soon realise that there were no accompanying stings, and would get progressively more daring.

And as virtually no farmers could afford to buy sound equipment or even have electricity to power it, the beehive fence is a more realistic solution.

The clash of man and elephant (Loxodonta africana) is a growing problem, with humans encroaching on wildlife habitats as more land is cleared for agriculture, and elephant populations increasing in some parts of Africa.

Farmers suffer devastating losses of maize, beans, potatoes, squash and other crops to marauding elephants, and they retaliate with shooting, poisoning and spearing. The tragic result, too often, is death on both sides.

Reports of raiding leviathans are received on an almost daily basis. In the latest incident earlier in June 2009, more than 5 000 Mozambican families were forced to abandon their homes after elephants on the hunt for cereal crops attacked their villages. In this case the result was not death, but absenteeism, as frightened children refused to go to school.

The Save the Elephants non-profit organisation is now following the lead of the Elephant Pepper Development Trust, which uses chilli peppers to humanely keep elephants out of farmers’ lands.

Chillis contain the fiery chemical capsaicin, which is unpleasant to eat. Sown amongst other crops, they keep elephants away. Chilli crops eventually end up in a range of award-winning sauces and spices, which in turn help to fund the organisation and give African farmers a little more cash in their pockets.

Beehive fences are proving to be another successful, and humane, way to deter elephants. Working with Oxford zoologists, Save the Elephants researchers designed the fence, strung at intervals with beehives. The fence poses an effective and affordable barrier that elephants are literally too afraid to cross.

The hives are made from logs suspended on fence poles set 8m apart and connected with fencing wire. Each hive is protected from the sun by a small thatch roof. Oxford researchers say that when elephants attempt to push through the fence, the hives swing around at the end of their wires and the bees are roused. Their agitated buzzing causes the elephants to turn tail and run.

A report published on 1 June 2009 in the online version of the African Journal of Ecology states that a six-week pilot project in Laikipia, Kenya, was tremendously successful.

Compared with a nearby control farm, the hive-protected farm had 86% fewer successful raids although fields were not fenced all the way around, and was consequently more productive.

The authors, Lucy King, Anna Lawrence, Iain Douglas-Hamilton and Fritz Vollrath of Oxford and Save the Elephants, suggest that there is an added financial benefit. Although hives would require maintenance, farmers could recoup the cost of the fence and boost their income through the sale of honey and other bee products, as with the chillis.

Significantly, even empty hives did the job. The mere sight of the hives, suggested the researchers, triggered unpleasant memories of earlier encounters with bees. The areas around an elephant’s eyes and inside the trunk are vulnerable to a bee attack, and an angry swarm can kill a calf that has yet to develop the thick protective hide.

Oxford hopes that the fence will help reduce the ongoing conflict between man and beast. A wider study is now underway, involving 60 farms and 1 700m of beehive fencing. The project is funded by the Disney Worldwide Conservation Fund, Kenya’s Safaricom Foundation, Rufford Small Grants and Save the Elephants.

Farmers are proving to be very receptive to the beehive fence as it is cheap and easy to construct, and also provides protection against cattle rustlers.