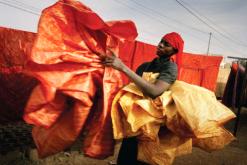 The vibrant bazin fabric of Mali has
grown into a valuable income-earning
industry and world fashion leader.
(Image: Africa Renewal)

It became the hit song on an album that won two prestigious BBC awards the following year, including one for best world music album.

There is an engaging paradox in two blind people singing about the beauty of bazin, and the floral patterns and alluring colours that make young women look so elegant that bachelors hastily vow marriage. Amadou and Mariam are married.

Hand-dyeing bazin can be labour-intensive for the women who produce it.

First, they import the fabric – mostly white cotton, but sometimes silk or wool – from Germany, the Netherlands or China. Then they cut it to standard sizes.

Next they knot tissues tightly into parts of the fabric so that those parts remain undyed when the cloth is dipped into buckets of pigment and fixative. When the fabric emerges it bears coloured spirals, rings or patterns. So it will have a glittering appearance, it is then soaked in a starch solution and hung on fences to dry.

“To hand-dye a bazin takes a lot of real effort,” says Djénéba Diarra, who lives in Badalabougou West, the neighbourhood in Mali’s capital famous for high-quality dyeing.

Maureen Gosling, a US filmmaker, is collaborating with anthropologist Maxine Downs on a film on bazin called Bamako Chic: Threads of Power, Colour and Culture. According to Downs, the duo wants want to show how “self-empowered African women turned their artistic creativity and resourcefulness into a force for alleviating their own poverty.”

Downs visited Mali several times to meet some of the women in the burgeoning industry.

“When I went to Mali, I was shocked by the women’s resilience, their ability to create something out of nothing. I was instantly impacted by the amount of cloth dyers that I saw,” she told Africa Renewal.

Malians have historically been good at making fabric and used to compete with Yorubas in Nigeria. In the 1960s, when synthetic dyes arrived in West Africa, Malians learned how to use colorants on fabrics to reflect their aesthetic tastes. Nigerians have since established a niche for themselves in embroidery, allowing Malians to claim the bragging rights for high-quality hand-dyed fabrics.

Bazin, Downs elaborates, is not just a fashion statement. The women make a profit. And the industry has turned them into a close-knit social group, with a common socio-economic purpose.

“It is like a collective enterprise, very communal,” she said. “The women work with their children, friends and other family members to dye the fabrics. They hang them on their neighbours’ fences to dry, turning the whole community into a huge advertisement.”

This is good news for a country ranked by the World Bank as one of the poorest in the world. Life expectancy is just 51 years, while the average gross domestic product per person is $691.

The country ranked 175 out of 187 countries in the UN Development Programme’s 2011 Human Development Index.

The bazin industry is still informal. There is no registration of those involved, according to Hannah Larsson, who has studied textile dyeing in Mali. However, the entrepreneurial successes of the women depend on micro-loans from NGOs such as the US-based Freedom from Hunger.

The group’s Saving for Change programme in Mali, which began in 1989, has so far reached more than 350 000 Malian women, with cumulative financing of nearly $7.5-million.

Some of those women are in the bazin business, according to Christopher Dunford, a senior research fellow with the NGO. The programme provides affordable credit and saving services, while repayment terms are flexible.

To access the loans, Dunford adds, groups of women come together to overcome their limited collateral.

“They are like joint solidarity groups. They vouch for each other and they jointly repay the loans.”

The NGO channels all micro-credit support through local credit institutions, which also help organise the women into groups.

As good as the business appears today for Malian women, they fear that a moribund indigenous textile industry could hold back progress.

Mali’s two leading textile companies, Comatex and Batexci, both privately owned, are gasping for breath as they face competition in their own market from cheaper and better products from Europe and Asia.

In addition, depressed world cotton prices have made it difficult for West Africans to compete internationally. Cotton production in Mali declined from 600 000 to 240 000 metric tons between 2004 and 2011, and cotton growers are paid as little as 30 cents per kilogramme.

Less than 2% of Mali’s cotton is processed locally, with the rest exported to developed countries and Asia, where it is processed and resold to dealers, including West Africans.

There are also health and environmental concerns about bazin production.

“The women continue to develop respiratory illnesses,” says Downs. “They are exposed to sulphur that they use to help colours stick to the fabrics.”

The leftover colour baths are discarded in the Niger River, street gutters or soakaway pits in housing areas, causing the “transport of a substantial amount of compounds to surface water and groundwater,” Larsson writes in her study of Malian textile dyeing.

As bazin’s popularity spreads beyond Mali’s borders, the women are motivated to work even harder. Many are already exporting to countries such as Senegal and Nigeria, and more traders from other countries are coming into Mali to make purchases.

“In Mali, you come into the market and you will hear different West African languages,” says Downs.

It makes good business sense to set sights on the enormous West African market of 252-million people. West Africans are proud, traditional dressers. As in other African regions, including Southern Africa, the leaders of Nigeria, Mali, Liberia and other countries often wear traditional attire at official functions, for example.

A variety of fabrics and styles feature regularly at weddings, red carpet events and in African films. At the UN General Assembly in October 2011, Mali’s Prime Minister Cissé Mariam Kaïdama Sidibé was the centre of attention in a flowing bazin.

Increasing demand for bazin has triggered innovation, as Malian women introduce more exotic colours and products of higher quality. But the challenge is that a fast-growing and profitable business may attract people with more interest in profit than quality.

“Why can’t these women just get machines that will support production?” asks Oumar Damba, a Bamako-based fashion designer.

Not so fast, cautions Downs. Machine production may affect the unique character of the bazin designs and, perhaps, the style consciousness of the producers.

“Since the 1960s, there has been the question of whether the hand-dyeing industry can be modernised. It is hard for me to answer that question,” she adds.

As Malian politicians campaign for the April 2012 presidential election, there also seems to be a contest over which one could wear the best bazin on billboards, on posters and even in Facebook pages.

Meanwhile, Malian women are smiling all the way to the bank.