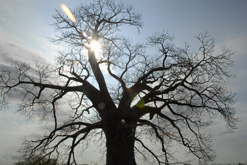 The fruit of the mighty baobab is to be
processed and exported to US food markets,
bringing in better incomes for rural African
farmers.
(Image: Graeme Williams,
MediaClubSouthAfrica.com. For more free
photos, visit the image library.)

The magnificent baobab tree, with its sturdy trunk and broad, root-like crown, is one of Southern Africa’s icons and a well-known sight in photographs and travel brochures.

Not as well-known is the fact that the tree’s fruit and leaves are both edible, and the baobab fruit is particularly nourishing and rich in vitamins and antioxidants.

Now, the benefits of baobab (Adansonia spp.) are to be experienced by millions of overseas consumers, with the September 2009 announcement that the US Food and Drug Administration (FDA) has approved the importation of baobab powder, made from the pulp of the fruit, into the US.

This is significant for the hundreds of African farmers who derive a living from the massive trees.

Harare-based PhytoTrade Africa is the driving force behind the application for export. The announcement follows PhytoTrade’s successful application to the European Commission, which gave its approval for export to Europe in July 2008

PhytoTrade, a trade association, helps rural farmers in Southern Africa get their natural products to market. It represents thousands of producers across eight nations in the region and states its purpose as poverty alleviation and the protection of biodiversity by promoting sustainable, ethical and economically viable enterprises.

In October 2008 PhytoTrade prepared its submission to the FDA under the “generally recognised as safe” (Gras) classification. The Gras food additive classification indicates that the additive has been deemed safe for its intended use. The evaluation is performed by suitably qualified experts. Gras-certified additives are exempt from the usual full FDA pre-market review.

Now that Gras status has been conferred on locally produced baobab powder, PhytoTrade and its commercial partner, plant extract specialist Afriplex, will look at launching products in the US as soon as the beginning of November 2009.

PhytoTrade communications director Dr Lucy Welford, based in Cape Town, said the application has been put together with a view to capitalising on the current popularity of African food in overseas markets such as the US.

The 2010 Fifa World Cup is another useful platform which will assist in the marketing of baobab products, by creating greater awareness of Africa and African foodstuffs. PhytoTrade hopes that products will be available locally in time for football’s biggest tournament, which kicks off in June 2010.

PhytoTrade believes that baobab powder has the potential to spawn a billion-dollar industry, with health-conscious consumers showing increasing interest in exotic flavours and products that offer extra benefits, and adhere to Fairtrade standards to boot.

Farmers are paid fairly for their produce and, said Afriplex, the big buyers also return a portion of their sales profits to the villages to fund community projects.

According to PhytoTrade’s CE, Gus Le Breton, there is already strong interest in the powdery substance.

“Dozens of companies have shown interest in baobab since we submitted the application,” he said, “and many have already conducted initial research. Now that approval has been given, they can progress to full-scale product development.”

Baobab’s vitamin C content is up to three times that of an orange. In addition to its high levels of antioxidants, it contains natural fibre, calcium and iron. The fruit is also a source of riboflavin (vitamin B2) and niacin (vitamin B3 or nicotinic acid), as well as pectin and citric, malic and succinic acids. Baobab oil contains vitamins A, D and E.

Both fruit and leaves can be eaten, while the bark is used to make rope.

Outside Africa the fruit and leaves of the baobab are not eaten directly – the fruit is generally processed first to the fine white powder and then added to food and drink products.

Baobab powder is particularly suited as a nutritious additive for thicker drinks such as smoothies, and can also be used in jams, cereals and cereal bars, and biscuits. The healthy drinks and snacks market is a top priority for PhytoTrade.

In Africa, the baobab grows primarily in South Africa, Botswana, Namibia, Mozambique, Zimbabwe and Madagascar, where it is the national tree. Baobabs can grow as old as 1 000 years.

According to a 2007 study written by marketing economist Ben Bennett of Britain’s Natural Resources Institute, the sustainable harvesting of baobabs has the potential to bring in an extra US$1-billion (R7.35-billion) into Africa annually. Up to 2.5-million poor households stand to gain work and income through this.

Wild harvesting of baobabs and collecting fruit from the trees or the ground will ensure the sustainability of the process. And as a source of income, baobabs will act as a deforestation deterrent because people will be more eager to protect them and less willing to chop them down to clear space for other crops.