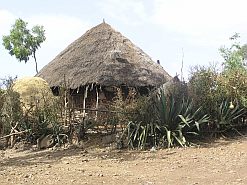 A Ugandan village hut complete with solar
panel on the roof. 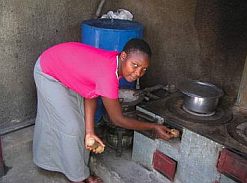 Two African projects are among only seven around the world in 2009 to have won acclaim from the UK-based non-profit Ashden Awards, an internationally recognised gauge of excellence in the field of sustainable energy.

The 2009 awards ceremony took place earlier in June in London. Awards were presented by the Ashden patron, HRH the Prince of Wales.

“The major value of these awards,” said the royal guest, “is that they demonstrate what is possible, not only for small-scale projects, but what is achievable for the whole world. So much of what we need to build cleaner and more efficient communities is already with us.”

The Ashden Awards for Sustainable Energy were established in 2001 to reward companies that strive to develop innovative energy solutions. In addition to the money prize, Ashden helps these companies to achieve their objectives by boosting their publicity, which attracts potential partners and sponsors.

Awards are given to UK-based schools and companies, and to worthy international projects. They are worth US$32 800 (R266 500) in money terms, but the international exposure to influential organisations and individuals is priceless.

Power to the people

Established in 2006 by Harald Schutzeichel, the founder and former head of S.A.G. Solarstrom in Germany, the Solar Energy Foundation has successfully embarked on a huge solar energy programme in Ethiopia.

To date the organisation has installed more than 2 000 small renewable energy systems in two remote villages that have never been connected to the national grid.

In Ethiopia a meagre 1% of people in rural areas have access to electricity, and depend on kerosene and candles for lighting. Now, over 5 500 people in the communities of Rema and nearby Rema ena Dire, located in the highlands of northern Ethiopia, are enjoying electricity for the first time in their lives.

The standard 10W installation powers four LED lights and a radio. In addition to this, the organisation is planning a double-size unit for bigger families, as well as a smaller system with just one LED light.

In August 2008 former US president Bill Clinton paid a visit to Rema village during his tour of Clinton Foundation projects in Africa. The Solar Energy Foundation receives a large part of its funding from US-based Good Energies, whose chair made a public pledge in 2006 to Clinton to ensure the development of Rema and other villages as part of the Clinton Global Initiative.

The organisation plans to install another 8 500 units around the country by the end of 2009. The initial installations were funded by the organisation, but a microfinancing deal will allow future clients to pay for their systems over a three-year period.

Not only does the Solar Energy Group install solar systems, but it believes firmly in skills transfer and trains the community to install and maintain the systems. And even better, said the company’s Ethiopia representative Samson Tsegaye, is that solar lighting has empowered and enriched the communities.

A local women’s association has set up a night school to teach adult literacy. Children are able to study after sunset, and the community is healthier because of the decreased exposure to kerosene fumes. A solar-powered water pump provides safe drinking water.

To further develop the solar industry in Ethiopia, the foundation has set up a school to train Ethiopians in the science of solar energy. The solar-powered International Solar Energy School in Rema has already seen a number of people graduating as solar technicians.

Kampala Jellitone Suppliers, established in 1976 in Uganda, produces environment-friendly briquettes made from agricultural waste, thus helping to eliminate the ongoing deforestation that is slowly stripping the land of greenery.

The briquettes contain no carbon and are made of residue from the processing of commercial crops such as coffee, maize, rice and peanuts. Now, instead of simply burning their waste in large heaps and further adding to atmospheric pollution, processing companies offload it at the Jellitone premises for conversion to a more useful product.

The idea was first conceived when Jellitone, originally a coffee-processing concern, was looking for an alternative to the liquefied petroleum gas it used in its coffee roasters. This gave rise to the idea of using its own residues as fuel, and the market developed quickly from then.

The initial investment in equipment soon paid off when nearby schools expressed interest in buying the briquettes. The company has two machines, one that can produce 200kg per hour, and a bigger one that produces 500kg per hour.

Together with the stoves it markets, which are specially designed to burn the briquettes more cleanly, Jellitone’s contribution to a cleaner environment equates to 9 300 tons of carbon dioxide saved every year. And since the briquette stoves replace firewood and charcoal, the need to chop down trees is diminished.

Kampala Jellitone Suppliers now have plans to double their output within the next two years, and expand their operations into neighbouring African countries.