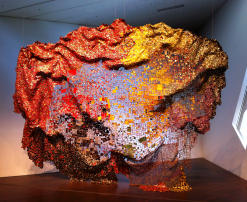 El Anatsui’s 2011 piece Stressed World was commissioned for an exhibition titled When I Last Wrote to You About Africa.
(Image: Konnect Africa) 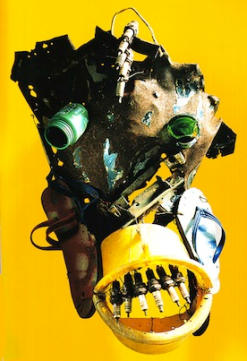 Calixte Dakpogan specialises in creating figures and masks from plastic, iron, glass, copper, wood, and whatever else he can find. This 2002 piece is named La mort debout – Resuscitated.
(Image: CAAC Art)

African artists have been recycling and re-using materials for hundreds of years. In Benin, a vast number of imported copper pans were recycled to cast various objects such as the Benin bronzes, while in Ghana the unravelling of imported foreign silks were used to increase the availability of thread colours for Kente cloth.

Artists have long interrogated the significance of using different materials in art and for many the material chosen holds a crucial conceptual importance.

Understanding this symbolic significance of a material requires an understanding of the context and environment in which the artist is working.

Transformation through re-use, not recycling

One artist with a love of raw materials is Ghanaian sculptor El Anatsui. His work includes the re-use of woods and metals, which he gathers himself and transforms into sculptures.

Working with whatever his environment throws up, Anatsui frequently makes use of discarded liquor tops. The liquor tops are cut up, flattened, arranged in a sequence and joined together with copper wire to create large cloth-like sculptures. The once rigid metals become flowing rhythmic representations of Ghanaian cloth, which portray particular Ghanaian symbols and representational values.

There are good reasons for Anatsui’s choice of used liquor tops. The bottle tops’ malleability allows the artist to puncture holes through them, a quality unobtainable with discarded soda bottle tops.

Furthermore, they refer to the historic ties of the alcohol trade between West Africa, Europe and America; to the pleasure of drinking or “building the stomach”, a common cultural turn of phrase; and they reflect the consumptive nature of society as a whole.

El Anatsui does not recycle these bottle tops, but transforms them. And the connotations they carry become a part of the work itself – a commentary on his society, cultural history and environment.

Calixte Dakpogan of Benin is another artist who uses discarded materials. Dakpogan’s skilful manipulation of materials goes back to the time of an ancestor, who was a blacksmith at the 19th-century royal court of King Toffa, and the tradition has been passed down from father to son ever since.

Dakpogan benefits from a seemingly inexhaustible abundance of car wrecks in his home town of Porto Novo, and other abandoned bits and pieces to make sculptural figures and masks.

This allows him a great deal of symbolism on which to draw. The automobile is often seen as a symbol of power under the protection of Ogun – the Yoruba god of metal work – and Dakpogan’s sculptures also relate to the Fon statues from the early 19th century.

Through his choice to use and transform these materials into relatable sculptural forms, Dakpogan’s artworks intentionally play with associations to his heritage and culture.

In working with recovered materials, Dakpogan bestows a level of energy upon his sculptures which would be unobtainable if the artist used new materials. Whilst it is clear that the materials’ easy availability plays a role in their use, there is no doubt that Dakpogan’s choice of materials is based on aesthetics and artistic vision rather than necessity.

Romuald Hazoumé in Benin takes a slightly different approach in his used of discarded objects. He does not transform his objects per se, but re-uses them. An object used repetitively in his work is the petrol can, which implicitly draws reference to the black market petrol trade and its deeper social significance.

With cheaper petrol prices in neighbouring Nigeria – until recently – the black market saw petrol flow easily, if illegally, across the border. The cans carried by black market transporters are worked to breaking point then discarded, something in which Hazoumé sees similarities with enslavement.

He says, “Many people live in the same kind of conditions, bound to work their whole lives for rich bosses who use them without regard for their humanity, and who then throw them away, like refuse”.

Hazoumé’s representation of slavery is most notable in the multimedia installation La Bouche du Roi (the mouth of the king) in which he uses dozens of petrol containers laid out to resemble an 18th century print of the British slave ship Brookes – this now notorious image was used by campaigners, led by William Wilberforce, against the transatlantic slave trade.

The individual containers represent the people of Africa who were crammed together in the slave trade. The piece refers to the exportation of oil to the West with little in return, juxtaposing the historical image with that of the implement used to transport petrol. The used petrol cans act as a metaphor for slavery past and present.

El Anatsui, Calixte Dakpogan and Romuald Hazoumé are just three examples of African artists with the ingenuity, creativity and contemplation to turn what others discard or see as junk into works of art. And, in doing so, creating dialogue about social, historical, and political realities.

A material or use of material simply does not hold one value, connotation or significance; instead, any material holds a different value and characteristic depending on the context in which it is used. This is nowhere clearer than in African artists’ re-use of everyday bits and pieces.