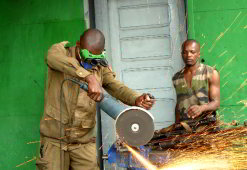 Workers in an army artillery base in the
eastern Brazzaville neighbourhood of Mpila
saw up guns due for the incinerator in a
nationwide disarmament effort.
(Image: Irin News)

Officials and analysts expressed optimism that a convention signed in Brazzaville, the Congolese capital, on 19 November would succeed in stemming the flow of small arms in Central Africa, as long as it is backed by robust implementation measures.

“For the Democratic Republic of Congo (DRC) which has suffered the disastrous consequences of the circulation of small arms, a legal instrument such as the Kinshasa Convention is something extremely crucial,” said Alexis Thambwe Mwamba, the DRC’s Foreign Affairs minister.

“This convention is perhaps more important for us compared with other countries which have not had such problems,” he said.

Low prices mean small arms are easily accessible. “With US$50 or $60, one can buy a Kalashnikov,” added Mwamba.

“The Kinshasa Convention is a potentially significant development to combat the illicit trafficking and misuse of small arms,” said Eric Berman, managing director of the Small Arms Survey, a Geneva-based research institute.

“Given the proliferation of small arms and ammunition in Central Africa and the devastating effect this materiel has had on people’s lives and the ability to uphold law and order, a sub-regional framework to tackle this scourge merits international attention and support,” he told Irin.

Berman added that for meaningful progress to be made, the convention’s signatories will need to put dedicate the necessary human and political resources for a sustained period of years.

Delegates from Burundi, Equatorial Guinea and Rwanda said they required further guidance from their governments before signing.

Once it comes into force after six states have ratified it, the convention will fill a geographical gap left by similar conventions in force in other parts of Africa.

Francis Wairagu, head of research and gender at the Nairobi-based Regional Centre on Small Arms, was also optimistic, pointing out that similar conventions covering other African regions have had a significant effect.

“The whole purpose of regional instruments is based on the fact that small arms move across borders so it is not effective for one country to fight small arms alone,” said Wairagu, whose organization oversees the implementation of the Nairobi Declaration on the Problem of Illicit Small Arms and Light Weapons in the Great Lakes Region and the Horn of Africa, signed in 2000.

“Most illicit arms start their lives as licit, so if government arms are marked, you reduce the opportunity of them becoming illegal.”

The Kinshasa Convention “will make a difference because some of the signatories have already signed up to other regional instruments” so they can share their experiences of best practice with more isolated states, said Wairagu.

But he also noted that “without resources the convention will not get anywhere” and that willing donors would only provide funds if “a clear plan for implementation” is demonstrated.

The convention provides for the control of ammunition and all other elements used in the manufacture, repair and assembly of small arms. It will allow “the transfer of light and low calibre weapons between states but under strict national authority control”, according to the UN’s Regional Centre for Peace and disarmament in Africa (UNREC).

It prohibits civilian possession of light arms and requires those with low-calibre weapons to obtain a licence.

“The illicit traffic in small arms and light weapons poses a real threat to global human security. It exacerbates crises and conflict, including in Central Africa,” said the UN representative for disarmament, Sergio Duarte.

Light weapons include a range of medium-calibre and explosive ordnance, such as man-portable and vehicle-mounted anti-personnel, anti-tank and anti-aircraft rockets, missiles, grenade and rocket launchers, landmines, anti-aircraft guns, mortars, and grenades.

According to a 2006 study, an estimated seven million weapons were in illegal circulation in the central African sub-region, said UNREC director Ivor Fung.