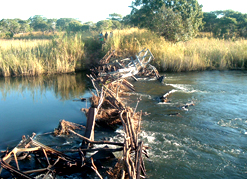 Before construction: locals in the Moxico
region of eastern Angola using scrap
metal to cross a river. 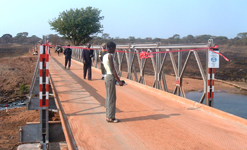 After construction, the Luzi bridge now
forms part of a 155 mile stretch of a road.
and bridge project.
Images: www.maginternational.org 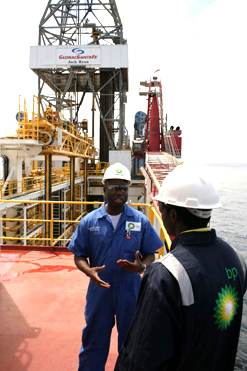 BP workers aboard the Jack Ryan Drill Ship.
The oil and petroleum giant has been
commissioned to develop deepwater oil
mining on Block 31, Angola.
Image: www.bp.com

Once laid flat by three decades of civil war, the economy of the Southern African country of Angola is set to grow by 20% this year alone, according to deputy prime minister Aguinaldo Jamie. This exceeds the Angolan government’s prediction of around 16.5%.

The country has enjoyed steady economic growth since the end of the conflict in 2002. Figures indicate that next year its gross domestic product will continue its rise into double digits.

Angola is rich in natural resources, left untapped during the years of war. It has abundant water and fertile soil, as well as a rapidly growing diamond and gold mining sector. It has also recently surpassed Nigeria to become Africa’s biggest oil producing country.

The 20% rise is a World Bank prediction, announced by Jamie during a recent visit to South Africa to bolster trade and investment between the two countries.

To help the development of post-war Angola, in May 2007 the World Bank approved an International Development Association credit of US$102-million (R780-million) to the government of Angola for the implementation of the second phase of the Emergency Multisector Recovery Programme (EMRP2).

The programme is geared towards helping build the foundation for long-term reconstruction, economic rehabilitation, and the reestablishment of state administration throughout the country.

While its first phase addressed only the most urgent needs, EMRP2 will focus on upgrading infrastructure by fixing or building roads, bridges, electricity services, rural water supply, and urban infrastructure.

Speaking to news agency Reuters, Jamie said one task the government elected in Angola’s upcoming parliamentary elections on 5 September would have to undertake was establishing a stock exchange in the capital Luanda, to accommodate the country’s burgeoning businesses.

The post-war recovery plan includes maximising the country’s rich natural minerals and resources, give it the potential for being a mining and agricultural powerhouse.

According to Angola’s Prime Minister Fernando Dias dos Santos, oil currently counts for almost 90% of the country’s exports. But this is bound to change as other sectors grow. “We have the potential to become one of the world’s richest agricultural countries,” he said.

Dias dos Santos added that government is spending large amounts on rebuilding roads, electricity and water supply networks. He said the infrastructure project involved both the state and private investors.

“We are creating areas of investment in several provinces in the rural areas,” he said. “Some [projects] will be financed by the state but there has to be more private investment. I think that in the next two to three years there will be visible changes [in production].”

According to Jamie, there are also plans to resuscitate Angola’s once-thriving coffee- and banana-producing sectors. Before the war, Angola had a buzzing coffee and banana farming industry. “There are old coffee plantations being revived in the centre and south of the country and rising investments in banana plantations like in Benguela, Luanda and Luanda Sul,” he said.

“Our goal today is not the same as in the 1970s. We have to surpass those goals. The situation is different and the population itself has increased.”

Improving the lives of the people

But this growth has been off a low base, and Angola remains poor, with most of its people living in poverty. The government’s strategy here is to integrate the unemployed into its promising agricultural sector. The World Bank recently donated some $30-million (R230-million) to fund agricultural projects.

The rural areas are dominated by small scale subsistence farming, with local farmers tending small plots of land to provide for their families. Commercial farming has plenty of room to grow: at the moment, less than 10% of some 35-million fertile hectares is under cultivation, due to lack of technology and financing. Angolan agriculture has huge potential for rapid growth.

The return to productivity in rural areas is proving difficult and slow, however. Large areas remain uncultivable because of the presence of landmines. Functioning infrastructure in rural areas is limited, and there are few incentives for people to return to farming.

According to the International Fund for Agricultural Development (Ifad), which runs projects in Angola, the main goal is food security and reducing poverty in the poorest areas of the central highlands.

The Ifad’s approach is based on local-level knowledge of Angolans’ circumstances and needs. It takes into account three principles, used elsewhere in Eastern and Southern Africa. These are empowering poor people, carefully targeting the right areas to farm and helping rural organisations influence local and national institutions. The principles have significantly helped otherwise despondent rural farmers to build a farming industry.

There’s been a flurry of activity to strengthen Angola’s position as the top oil producer in Africa. Oil production has been ramped up since the end of the war, with 2008 output expected to increase from 1.9-million to 2-million barrels a day. The country has signed cooperatives agreements with China, with India also expressing in interest in investing in its oil sector.

In July 2008 UK-based oil and petroleum giant BP and its partners were given the go-ahead to begin one of Angola’s largest oil and gas investments, in a deal worth $10-billion (R77-billion).

In a statement announcing the deal, BP revealed that the state-owned Sociedade Nacional de Combustiveis de Angola, the company responsible for the management of oil and gas reserves in Angola, had authorised it and its partners to develop a series of deepwater oil discoveries 250 km from Luanda.

Construction is expected to start this year, with actual oil production scheduled for 2011, reaching an estimated 150 000 barrels per day by 2012.

The US imports more oil from Angola it does from Kuwait. So there is some outrage that the majority of Angolans remain poor. NGOs and civil society complain that the government uses oil revenues on big infrastructure programmes, forgetting the less spectacular but basic needs of citizens.

“It seems like pro-poor strategies aimed at poverty alleviation, education and community rebuilding are on the agenda and are actually making it into government medium term planning,” said Allan Cain, the director of Developmental Workshop, a pro-poor NGO.

But, Cain said, the government “will opt instead for large, high-cost infrastructure projects, such as roads and telecommunication, since those projects can absorb that money easily”.

The precious stones of Angola

Diamonds were first found in the northeastern parts of Angola in 1912 following discoveries in the neighbouring Belgian Congo (now the DRC). Both alluvial diamonds and kimberlite are mined in Angola, with all 700 known varieties of kimberlite found there.

The kimberlites vary in shape from rounded to elongate and diamond grade increases with depth. The best-known types are the Camafuca and Catoca kimberlites.

According to the Angola Mining Report for the second quarter of 2008, the huge interest shown foreign companies have shown in exploiting Angolan mineral reserves since 2002 has given a much-needed boost to the mining industry.

To a lure foreign companies to Angola the first diamond-polishing factory, the Angola Polishing Diamond, was set up in 2005 as a joint venture between state-owned diamond company Endiama and Israeli diamond magnate, Lev Leviev.

The Maiombe region of the off shore of Cabinda province accounts for 90% of gold production in Angola, with the Mpopo Deposit the largest primary deposit in Angola. But at the moment, there are no industrial gold mining operations in the country, with some 90% of production mined by artisan miners. In the past, companies such as Ashanti Gold Company Limited and Anglo American plc have earmarked the Huila and Cunene Provinces in the past. Other metals mined in Angola include platinum, copper, iron and manganese.

According to the Angola Mining Report, the country’s mining industry faces many challenges, such as illegal mining. Diamond smuggling has cost the country million dollars in lost revenues. In a bid to end the practice, the government is to establish an export certification scheme to identify legitimate diamond production.