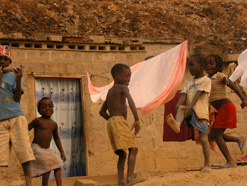 Angola’s new government is promising better health facilities at both primary and secondary care levels, as well as to reduce the prevalence of HIV/Aids over the next four years.

The oil- and diamond-rich nation went to the polls earlier last month and returned the ruling MPLA party to power with more than four-fifths of the votes, giving it 191 seats in the 220-member legislature. Unita, the largest opposition party, only managed to garner 10% of the vote, which gave the former rebel movement 16 seats.

Fernando Dias dos Santos, the former prime minister and newly appointed Speaker, said at the swearing-in of parliament in the capital, Luanda, on 30 September, that “Angola is turning an important page in her history by starting a new cycle of a better life for all.”

The legislative elections were the first since 1992, and six years after Unita founder and leader Jonas Savimbi was killed in a skirmish, ending the country’s long-running civil war. Presidential elections are scheduled for 2009, although it is unclear whether President Jose Eduardo dos Santos, who has held power for 30 years, will contest the ballot.

“These goals are intended to combat HIV/Aids, reduce the prevalence by 3%, address 70% of the cases of tuberculosis and cure 85% of the sick,” the press association said.

Fresta said the government aimed to achieve a ratio of three doctors to 10 000 people; currently there is one physician for every 10 000 inhabitants.

About 2.1% of Angola’s 15-million people are infected with HIV, according to UNAids, a relatively low figure for the region. This is attributed to the years of conflict, in that “the relatively slow spread of HIV might have resulted from a lack of mobility during the war.”

In September Angola was widely acknowledged as Africa’s biggest oil producer, overtaking Nigeria, whose production had declined as a consequence of the upsurge in rebel activity in its oil-producing areas, mainly by the Movement for the Emancipation of the Niger Delta (MEND).

However, revenues from Angola’s estimated production of 1.9 million barrels per day have done little to alleviate poverty. About 70% of the population live on US$2 or less a day, rising to 94% in rural areas, and according to the UN International Fund for Agricultural Development, health services cover only 30% of the rural population.