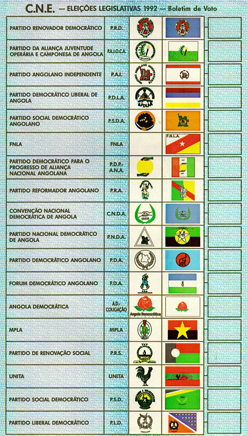 An example of the ballot paper to be used
during the elections. 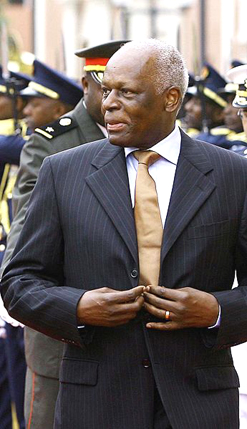 President Jośe Eduardo Dos Santos is
confident his party, the MPLA will win the
upcoming elections. 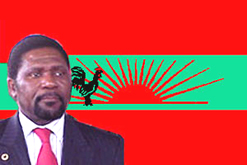 A strong contender: Unita’s Isaias
Samakuva plans to give the MPLA a run
for their money. 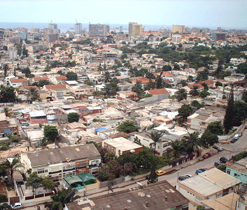 Luanda, the capital of Angola is a bustling
city with strong growth prospects.

The world’s eyes will be on Angola on 5 September 2008 when the country holds its first parliamentary elections since the final end to three decades of civil war.

President Jose Eduardo Dos Santos announced this year’s elections in December 2007, with his office releasing a statement that “the president has today, using his powers laid down by the constitution, called the elections to be held on September 5. The legislative elections will be held across all national territory.”

The announcement came a day after the Council of the Republic, a body made up of all Angola’s political parties chaired by the president, gave its final approval. The group was previously briefed that all preparations were in place.

Registration of 8.3-million voters was completed in May 2008, with 8 000 polling stations being set up across the country. Ten parties, including four coalitions, and over 5 000 candidates will battle it out for 220 parliamentary seats

Angola’s previous elections, in 1992, took place during a brief hiatus in the civil war, after successful negotiations between the National Union for the Total Independence of Angola (Unita) rebel movement, and the ruling Popular Movement for Liberation of Angola (MPLA). Led by Jonas Savimbi, Unita stood against Dos Santos and the MPLA.

After Dos Santos and his party won by a marginal vote, Savimbi refused to contest a run-off. He declared vote rigging, and the country returned to another decade of civil war, which finally ended when he was killed by MPLA forces in 2002.

The world is watching

International election observers are already in Angola, with the European Union (EU) mission arriving on 29 July. The EU plans to send more than a 90 observers to the Southern African country.

On her arrival in Angola’s capital Luanda, EU mission head Luisa Morgantini commended President José Eduardo Dos Santos and other political party leaders for their tolerance in the run-up to the elections. But she warned that the elections would be challenging, making international observation essential.

“It is fundamental that these legislative elections are conducted in a satisfactory manner and in line with international standards,” she said.

The Angola National Electoral Commission (CNE) has also invited an African Union (AU) observer mission to supervise the parliamentary elections, and the AU has made observers available.

According to Angolan ambassador to Ethiopia Manuel Domingos Augusto, the presence of AU observers shows transparency and good governance in the electoral process.

The elections were originally meant to take place in 2006, but were constantly delayed because of the poor roads and other infrastructure in certain parts of the country.

Political parties have been intensively campaigning across the country. Campaigning started on 5 August, with the parties each allowed five minutes on television and 10 minutes on the radio each day to canvass for voters.

While most of the votes are expected to go to Unita and the MPLA, smaller parties hoping to clinch a seat in parliament include the Party of Social Renovation, Democratic Front and the National Front for the Liberation of Angola.

The MPLA have embarked on an aggressive campaign in a bid to win the majority of the votes, with photos of Dos Santos and MPLA flags on public display in major towns across the country. Analysts say the MPLA’s greater resources give the party the edge, allowing it to mount its massive campaign.

“MPLA has all the advantages,” says Ishmael Mateus, a political analyst. “They have been in power for a long time, have all the machinery on their side, and they can show some work: roads were rehabilitated, bridges, schools, hospitals built.”

MPLA campaign coordinator Rui Luis Falção Pinto de Andrade claims there is no way the party cannot clinch a victory, “We have 3-million members,” he says.

While it is Angola’s biggest political party, the MPLA has come under criticism for its alleged failure to improve the social conditions of Angolans since the war ended in 2002.

But De Andrade says it simply hasn’t had the time. “The Angolan people are conscious that we were more than 30 years in war and we’ve only had six years of peace. But in six years of peace we have done many things.”

The Economist reports that over the past six years the government has built a reputation for competence and efficient management of the economy, overseeing high real GDP growth, falling inflation, and rising fiscal and current-account surpluses.

In their election manifesto, the MPLA has promised an even more aggressive second phase of post-war reconstruction, including the creation of two new cities. One of the cities will be designed by renowned Brazilian architect Oscar Niemeyer.

But in his election manifesto, new Unita leader Isaias Samakuva has highlighted the shortcomings of the government, including poverty, unemployment, the education system and corruption.

“It’s true our economy is growing, but it’s growing badly,” he said in a campaign speech.

“More than 90% of the nation’s wealth is stolen by the state and is concentrated on less than 0.5% of the population of around 18 million.”

The biggest challenge for Unita will be to change the public perception that it is a ruthless guerrilla movement, and untested as a government. Although Samakuva has been described as articulate, he has failed to gain favour for the party outside of its strongholds.

Despite their different approaches to solving Angola’s problems, one thing that unites all parties is the fear of another devastating civil war.

Do you have any queries or comments about this article? Email Khanyi Magubane: khanyim@mediaclubsouthafrica.com