In 1963 the Organisation of African Unity rose from the ashes of colonial rule. Since then, as the African Union, it has expanded and embraced its ever-growing role. 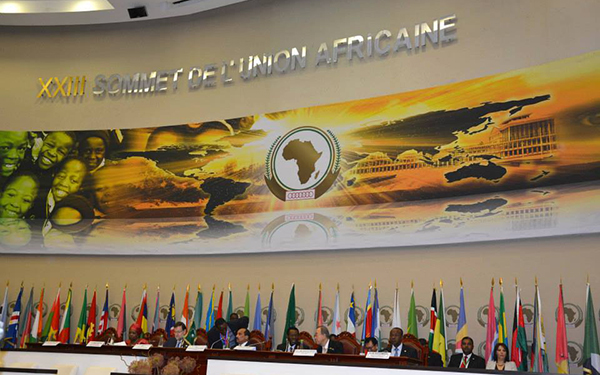 The opening ceremony of the 23rd Ordinary Session of the Assembly of the African Union in Malabo, Equatorial Guinea, on 26 June 2014. (Image: AU Facebook)

As African countries shook off the shackles of their colonial masters and gained their independence in the 1950s and 1960s, they recognised the need for a unified voice on the continent.

This led to the formation of the Organisation of African Unity (OAU), which officially came into being on 25 May 1963 in Addis Ababa, Ethiopia. At inception, it comprised 32 independent African states; over the years, the number of member states gradually increased.

However, Morocco withdrew its membership in 1984. Then, in the 1990s, OAU leaders debated an alternative structure for the organisation in response to the rapidly changing global political environment. By 1999, the OAU heads of state and government had issued the Sirte Declaration to establish a new African Union (AU). The AU was launched in Durban, South Africa in 2002, when it convened its first meeting.

The Heads of African States and Governments have signed the OAU Charter in the City of Addis Ababa, Ethiopia, 25th day of May, 1963

Addis Ababa, May 1963. for the first time in history, the leaders and representatives of all independent African states meet under one roof.

There are various organs within the AU:

This is made up of the heads of state and government or their ascribed representatives. It is the highest structure in the AU.

The Executive Council is composed of ministers or authorities chosen by the governments of member states. They are accountable to the Assembly.

This committee comprises permanent representatives of member states accredited to the AU. It is responsible for executing the work of the Executive Council and Assembly.

The Peace and Security Council

The Peace and Security Council (PSC) was set up to provide quick and efficient responses to crises. It is made up of 15 members.

The purpose of the Pan-African Parliament, or PAP, is to “ensure the full participation of African peoples in the development and economic integration of the continent”. It has up to 250 members representing the 54 AU member states.

There are also numerous other organs within the AU, which deal with judicial, legalisation, financial, economic, and human rights issues.

Role of the union

Many of the core principals of the OAU moved over to the AU:

• To promote the unity and solidarity of African states;
• To co-ordinate and intensify their co-operation and efforts to achieve a better life for the peoples of Africa;
• To safeguard the sovereignty and territorial integrity of member states;
• To promote international co-operation within the UN framework; and,
• To harmonise members’ political, diplomatic, economic, educational, cultural, health, welfare, scientific, technical and defence policies.

Watch the opening of the 24th Ordinary Session of the AU Assembly, which took place on 30 January this year in Addis Ababa, the seat of the union: