Buying a pair of shweshwe pyjama pants – they come in five Afro-inspired colours – will help to keep families in Mozambique safe from malaria. The idea is that making a difference is as easy as sleeping, says Goodbye Malaria. Cash raised is used for spraying homes to kill Anopheles mosquitoes. 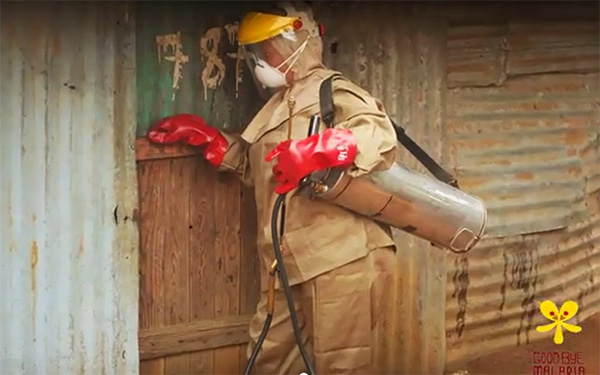 A total of 41 000 houses were already sprayed thanks to the Goodbye Malaria’s fundraising which entails selling of beadwork and shweshwe pants online. (Image: YouTube)

Goodbye Malaria was started by African entrepreneurs – among them the founder of global restaurant franchise Nando’s – who believe that African creativity can solve one of the continent’s biggest problems. “The initiative helps to raises funds that go directly to support on-the-ground malaria elimination programmes in Mozambique, spraying houses to protect families from contracting malaria,” the initiative explains.

“It also seeks to inspire people to join our fight against malaria by educating them that elimination is ultimately possible.”

According to the initiative, malaria caused 584 000 deaths worldwide in 2013; it also says 90% of deaths from the disease are in Africa. Women may be at a greater risk of contracting it, especially when they are pregnant.

Malaria is transmitted by female Anopheles mosquitoes that have been infected through a previous blood meal taken from an infected person. When a mosquito bites an infected person, it takes in a small amount of blood that contains microscopic malaria parasites. The mosquito becomes infected, and passes on the disease to other people it bites. Anopheles mosquitoes are known as “night-biting” mosquitoes because they most commonly bite between dusk and dawn.

Malaria symptoms typically include fever, fatigue, vomiting and headaches. In severe cases it can cause yellow skin, seizures, coma and death.

The Anopheles mosquito usually feeds during the night, which is why the initiative encourages people to make a difference in their sleep. (Image: Screen grab via Goodbye Malaria)

Spraying to save lives

Sherwin Charles, the Goodbye Malaria chief executive, says the campaign was launched in October 2013 in Mozambique.

Speaking about indoor residual spray (IRS), the method used to control the mosquitoes, Francois Maartens, a malaria control field co-ordinator who works with Goodbye Malaria, says the first trial was done in September and December 2013. A total of 41 000 houses were sprayed. “We spray every six months. Our recent IRS of that area was between October 2014 and March 2015. With 41 000 houses sprayed, 117 000 people were saved.”

Spray operators are recruited from the community because they need to enter people’s houses, says a representative of Goodbye Malaria on YouTube. “We find that if we recruit people from the area, at least they are known to the house owners.”

They spray six days a week, between 6am and 2pm, due to the heat in the afternoon. “The application method and technique is very important, so the spray operators are trained over a 10-day period.” 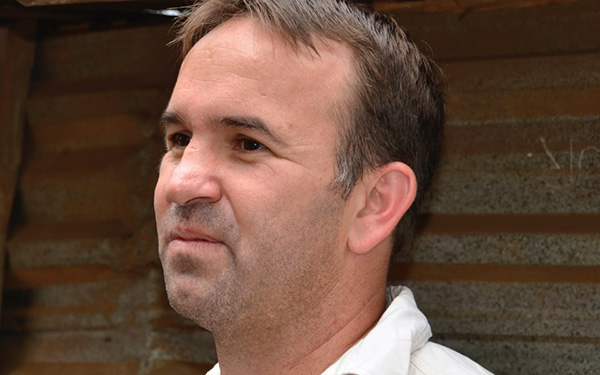 Francois Maartens says they spray every six months. “Our recent IRS of that area was between October 2014 and March 2015.” (Image: Supplied)

Maartens explains that a coating is sprayed on the inner walls of the house. “Generally, the Anopheles mosquito would sit on a wall first, before it goes to a human being. If the Anopheles sits on the wall, the coating kills it.”

The Anopheles usually comes into a house to feed during the night. “Because it is associated with the evening, we think the pants are a good product,” says Maartens. “We want to tell people that making a difference is as easy as sleeping.”

Robert Brozin, the founder of Goodbye Malaria and of Nandos, says the shwe shwe pants come in five Afro-centric colours and sell for R350 each. “They’re the perfect gift and can be purchased online,” he says.

The Mozambican government is a partner in the project. Mozambique is on the President’s Malaria Initiative (PMI), an American government programme. The primary goal in Mozambique of the PMI is to help the government, in collaboration with other partners, to reduce malaria mortality by 50%. This is done by rapidly scaling-up coverage of vulnerable groups with four highly effective interventions: artemisinin-based combination therapy, intermittent preventive treatment of pregnant women, insecticide-treated bed nets, and IRS. 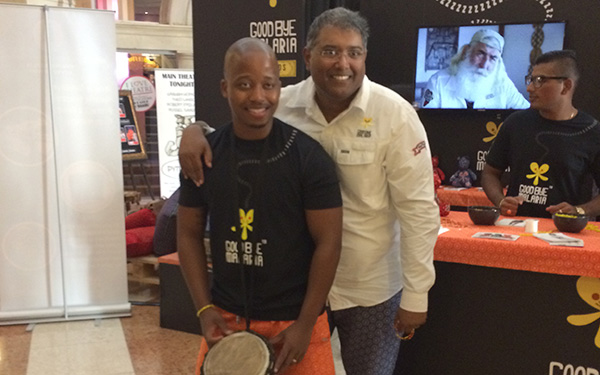 Sherwin Charles [right] encourages businesses to invest in social causes like Goodbye Malaria. Here he is with Mo-T from MiCasa. (Image: Supplied)

For Charles, Goodbye Malaria is evidence that the private sector and the government can work together. He says it is a fun, creative way to showcase African products. “It is a world-class product. We thought it would be great if we could have a cool item like this where you would feel good wearing it.”

He encourages African businesses to support the programme. “If you want to make a difference, invest in a social cause like this.” He also warns people who will visit malaria areas to be prepared. “There is medication on the market [to fight malaria]. Also, you don’t have to live with malaria once you are affected. It’s totally curable.”

South African singer Yvonne Chaka Chaka is an ambassador of Goodbye Malaria; others are the band, MiCasa, and the humanitarian adventurer, Kingsley Holgate.

Watch how the ten day training is done (and MiCasa being part of it):

Watch how the mosquito infects the human: