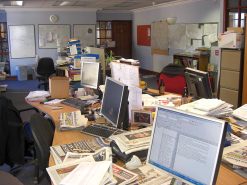 Journalists in newsrooms and editorial
offices all over Africa, and abroad, will
benefit from the proposed syllabus.
(Image: Wikimedia)

South Africa’s Rhodes University, in the Eastern Cape province, and Unesco are in the process of developing a syllabus for better reporting on Africa.

The two organisations have a common goal of ensuring top-quality journalism education and training on the continent, which will result in equally high-calibre reportage. A crucial step towards achieving this is to provide media learning institutions with the capacity to deliver good journalists.

The university’s SAB-Unesco Chair of Media and Democracy, Prof Fackson Banda, is at the helm and is working closely with Unesco’s regional office, based in Windhoek, Namibia.

Unesco and Rhodes’ School of Journalism and Media Studies have opened up an online discussion that, they hope, will attract the necessary expert opinion to enhance the proposed syllabus.

The syllabus will be based on Unesco’s model curricula for journalism education, which is a generic model that any country can adapt and use for its own specific needs.

This model took four Unesco journalism experts two years to develop, with extensive input from experienced journalism teachers in developing nations, and is aimed at both undergraduates and post-graduates. It was finally presented at the World Journalism Education Congress in Singapore in 2007.

To date, 16 groups have joined the online discussion, including the Ghana Institute of Journalism, Namibia University’s Department of Media Studies, and journalism departments from the Tshwane University of Technology, Stellenbosch University, and the Walter Sisulu University.

Consultation and input at all stages of development from experts and relevant bodies, such as African Journalism Schools and the World Journalism Education Congress, will ensure a practical, easily accessible syllabus.

The success of the project rests on two facets – research and development, and presentation and distribution.

A small team of pan-African experts will undertake the former, drawing up a framework for the syllabus, as well as researching specific subjects, and later gathering more expert input.

The latter aspect is to take place during panel discussions at the second World Journalism Education Congress, which sits from 5-7 July 2010 in Grahamstown, where Rhodes University is based.

Reporters, especially those from overseas, at times struggle with compiling accurate, wholly representative news and features from the continent. Even African journalists are not immune to misrepresentation, but often they are just conforming to the models already established by foreign media.

Not only should any reporting reflect Africa’s immense cultural diversity, it should also be relevant and sophisticated enough to appeal to a global audience. Basic journalism practices and media theory must entrench this thinking to avoid formulaic reporting.

“Such a project promises to open up new possibilities for negotiating how foreign – especially Western – journalists could possibly see the continent afresh,” stated the project’s introductory document.

“The same applies, albeit with some differences, to African journalists. But the process of leading up to such a reconfiguration of journalistic attitudes and behaviours must be driven by Africans themselves as a way of subverting the imperial, unidirectional gaze under which Africa has been seen and reported in the West, and possibly elsewhere in the world.”

By positively influencing the way Africa is portrayed in the media, said the document, Africans will regain the intellectual ground they have lost over many years.