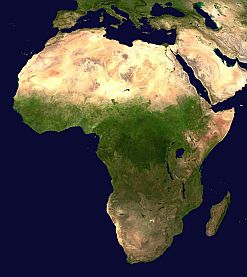 Much of northern Africa is dominated
by the Sahara desert. (Image: Nasa) 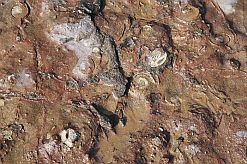 The Sahara desert, an ancient ocean,
is a treasure trove of fossils.
(Image: Museum of Palaeontology)

Google Earth has once again proved to be a boon to academia – the search engine has played an important role in the discovery of a treasure trove of African fossils that could shed light on the movement of mammals from Asia into Africa.

Palaeontologist Philip Gingerich of the University of Michigan and his colleagues Greg Gunnell and William Sanders made the discovery by roundabout way of a whale fossil found in a block of limestone cut from a quarry in Egypt. The limestone was in Italy at the time, where masons were slicing it into thinner pieces for use as countertops.

Noticing what looked like pieces of fossils in the stone, the masons immediately contacted palaeontologist Giovanni Bianucci from the University of Pisa, who identified the remains as those of a 40-million-year-old whale. The mammal lived in Egypt during the time when the northern part of Africa was a much wetter place than it is today.

Gingerich, an expert on early whales, was immediately intrigued and began making plans to visit the quarry. There was one problem, though, and that was the exact location of the site. Before setting out on a mystery trek across the desert, the palaeontologist decided to search for the quarry using Google’s state-of-the-art virtual earth application.

His only clue was a comment made by Bianucci that the quarry was near the Egyptian city of El Sheikh Fadl, situated on the east bank of the Nile river about 160km south of the capital city Cairo. The area is well known for its quality limestone, which is shipped all over the world in the form of countertops and tiles.

It didn’t take Gingerich long to locate El Sheikh Fadl. The next step was to locate the source of the limestone. “My idea was that a big rock quarry should show up,” he said in an interview with the Michigan Daily newspaper. “If it’s big enough to be exporting limestone to Europe, it’s going to have trucks coming in and out of it.”

Gingerich’s sharp eye soon spotted what looked like a range of limestone cliffs leading eastward across the Sahara desert. Zooming in and following the trail, he first saw the road he was seeking, and then an area of excavations that he knew must be the quarry.

Wasting no time, the palaeontologist made his way to Egypt, where he met with colleagues and then set out for the site. Once there, however, the busy quarrying industry and associated blasting seemed to be a hindrance to the easy discovery of whale fossils – until Gingerich spotted a band of red running through the white limestone.

This turned out to be a line of sediment, laid down in ancient caves by the wind and perfectly preserved. There was a good possibility of discovering fossils in this exact location, because caves often acted as traps.

“Red markings usually signify places where ground water has eroded caves,” said Gingerich, “and there should be animals preserved in that sediment.” He was proven correct when the team found a rich cache of little bones and jaws scattered throughout the area.

Samples were delivered to researcher Gregg Gunnell and William Sanders of Michigan University’s Museum of Palaeontology. Gunnell identified them as 20-million-year-old bats and rodents from the Miocene period that extended from 23-million to 5.3-million years ago. The little fossils belonged to the early Miocene epoch (23-million to 16-million years ago).

In fact, the researchers concluded that they could be amongst the oldest known mammal fossils from that period and, as such, an important clue to the dispersal of species between Africa and Asia, and between North Africa and the rest of the continent.

The early Miocene migration of bovid species from Asia into Africa occurred during cooler periods, when polar ice caps were denser and there was less water in the oceans. A combination of the lowered sea level and tectonic movement caused a land bridge to form between Africa and Asia at the time, giving animals the opportunity to seek new pastures.

Gingerich never found the whales he was looking for, but his discovery nonetheless is significant because the small rodents and bats could represent some of the forerunners of the wildlife that Africa is renowned for today.

“This place where we’re working on in Egypt is kind of right on those crossroads of coming into Africa from Asia, and in some cases going out of Africa as well,” he said.

This is not the first time Google Earth has aided in a scientific discovery. The application was crucial in the discovery in 2008 of the previously unknown Mount Mabu in Mozambique, an important biodiversity area that is virtually untouched.

In 2008 a meteor crater in Australia, dated between 10 000 and 100 000 years ago, was discovered in the western part of the country. Just two years before a 30km-wide crater, the biggest one ever found in the region, was identified in the Sahara desert. These are just two of 170-plus meteor craters around the world that may now be viewed in Google Earth.

Google Earth has also facilitated the discovery of the remains of a Roman villa built just before the birth of Christ, as well as ancient ruins in Burgundy, France.

And recently Google Earth has helped to raise awareness of a historical British site located about 1.5km east of Stonehenge. This is the spot where a clump of trees was planted as a tribute to Admiral Lord Nelson’s hard-fought Battle of the Nile. Each tree marks the position of a British or French ship in the battle. The site has been marked in Google Earth.

The application is also proving to be valuable for future events as well as those that happened many years ago.

In 2008 South African Tourism, with the help of Quirk e-Marketing, created an entire South African layer for Google Earth. The country was only the third to earn Google approval for its own official tourism layer, which features popular attractions ranging from scenic drives and safari destinations to locations of the stadiums for the 2010 Fifa World Cup.