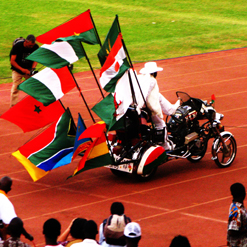 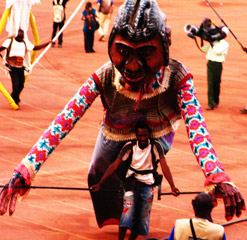 Showcasing the small West African
country’s finest talent, the ceremony saw
musicians, colourful dancers and giant
puppets creating a magnificent spectacle
of African performance that had the
audience on its feet. 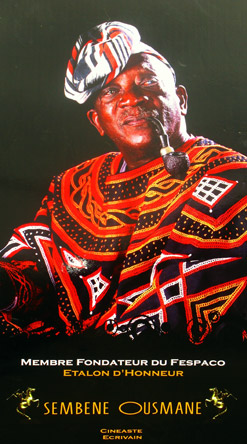 A libation ceremony to honour the life of
legendary African filmmaker Ousmane
Sembène was held at the Place de
Cineastes, a monument in Ouagadougou. 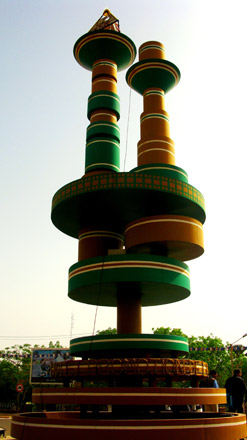 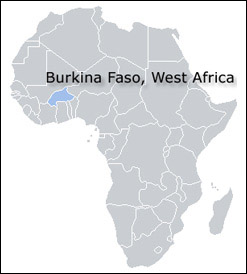 Pomp and ceremony was the order of the day as the 21st edition of the Pan African Film and Television Festival of Ouagadougou – officially the Festival Panafricain du Cinéma et de la Télévision de Ouagadougou (Fespaco) – opened in the small city of Ouagadougou, the capital of Burkina Faso, on 28 February.

Launched in 1969 and held every two years, Fespaco is regarded as the most prestigious gathering of African filmmakers both in Africa and the diaspora. The festival kicked off with an opening ceremony attended by some 45 000 people in Burkina Faso’s national stadium, the Stade du 4-Août.

Showcasing the small West African country’s finest talent, the ceremony saw musicians, colourful dancers and giant puppets creating a magnificent spectacle of African performance that had the audience on its feet. And the buzz wasn’t only in the stadium.

Outside, the city of Ouagadougou came alive as the festival attracts hundreds of vendors selling local cuisine, festival memorabilia, bottled cold water (temperatures average 40º during the day) and artefacts for tourists visiting the country to attend the week-long event.

As most Burkinabe’s use motorbikes and scooters to speed through the densely populated city, the parking lot could have easily been mistaken as a motorbike show with thousands of cycles parked in a designated area.

After the formal and entertainment programme, the sky exploded into a kaleidoscope of colour in a grand fireworks display, sending the locals into a frenzy of dancing and cheering.

Later that evening the stadium festivities were followed by a gala dinner at Ouagadougou’s Hotel Independence, to celebrate 40 years of Fespaco.

The following day a libation ceremony to honour the life of legendary African filmmaker Ousmane Sembène was held at the Place de Cineastes, a monument in the city. The ritual involved delegates holding hands to circle the monument, after which a statue of Sembène was unveiled and the renamed Ousmane Sembène Street launched.

Sembène was a Senegalese film director, producer and writer, often called the “father of African film”, and described by the Los Angeles Times as one of Africa’s greatest authors. From the early 1960s until his death in 2007, he worked to help lay the foundations for the development of Africa’s film industry.

After launching a successful career as a novelist – he authored the classic God’s Bits of Wood – Sembène realised that his written work would only reach the privileged elite. So in 1963, at the age of 40, he turned to film to reach wider African audiences.

In 1966 he produced his first feature film, La Noire de…, the first feature ever released by a sub-Saharan African director, which went on to win the French Prix Jean Vigo.

His final film, the 2004 feature Moolaadé, which explores the controversial subject of female genital mutilation, won awards at the Cannes Film Festival and at Fespaco.

The federation brings together African filmmakers, helping them network and keep abreast with activities within the industry across Africa and the diaspora. South Africa currently hosts the regional headquarters of Fepaci in Johannesburg.

Under the leadership of South African filmmaker Seipati Bolane-Hopa, the organisation has been tasked with facilitating events that bring awareness about the film industry as a whole on the continent and in the South African region, working with the SABC, DAC and NFVF.

During the 2009 Fespaco, 129 films from 74 countries will be in competition this year, with South Africa’s contribution including feature films, documentaries and television series.

The features include veteran actor John Kani’s screen adaptation of his flagship theatre production Nothing but the Truth, and the gangster movie Jerusalema by producer Tendeka Matatu.

Award-winning filmmaker Zola Maseko, whose film Drum won the prestigious Etalon de Yenenga for the best film at the 2007 Fespaco, will be showing his new work, The Manuscripts of Timbuktu. The television series Gugu no Andile will also be shown.

Special highlights of the festival include the first congress of the Federation of African Film Critics, which is involved in the training of film journalists and critics on African film.

For those interested in the business of buying and selling films, an exhibition at the MICA film market will be running throughout the festival, where stands by production companies, other film festivals and stakeholders can exhibit their products.