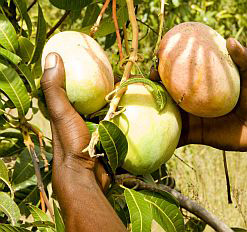 Mangoes and passion fruit produced by
small-scale farmers in Kenya and
Uganda will now be used to make
fruit juice for Coca-Cola.

Small-scale fruit farmers in Uganda and Kenya will soon be able to start making good money from their produce, thanks to a multimillion-dollar deal that will see them supply Coca-Cola.

The beverage giant has joined NGO TechnoServe and the Bill & Melinda Gates Foundation to form a partnership that will help more than 50 000 small farmers in Uganda and Kenya increase their output and generate a sizeable income.

The three organisations have invested a combined amount of R87.5-million (US$11.5-million) to sustain the initiative over the next four years. The new partnership was launched in Uganda’s capital, Kampala, on 20 January.

Coca-Cola will use mango and passion fruit from the two East African countries to make new fruit juice products for local markets. “This partnership is a great example of sustainability,” Coca-Cola’s East and Central Africa business unit president Nathan Kalumbu said in a statement.

“By partnering with tens of thousands of local farmers we can help increase their incomes while meeting our needs for locally sourced fruit, benefiting both the community and our business,” Kalumbu added.

Coca-Cola plans to replicate the project in other parts of the world to grow its fruit juice range. One such product in the range, Minute Maid, has already become a global hit. The company, together with one of its bottling partners, invested about R30.4-million ($4-million) in the scheme.

The beverage company said there’s an increasing demand for fruit juice both in East Africa and across the world, and therefore a critical need to increase production. As part of the deal the small farmers will be supplied with tools to help them increase their productivity.

TechnoServe, one of the leading NGOs that help communities grow their own enterprises, will work closely with the governments of Kenya and Uganda as a hands-on partner in the implementation phase.

It will also teach the farmers how to increase yields and improve quality, and help them gain access to the donor funds.

“We are honoured to be a part of this innovative collaboration as it represents a significant step forward for private sector development in Africa,” said TechnoServe president and CEO Bruce McNamer.

“This investment will drive momentum toward reducing poverty across Africa by helping entrepreneurial farmers connect to markets and get the support they need.”

The Bill & Melinda Gates Foundation, which donated R57-million ($7.5-million), said the initiative is very important in the global drive to reduce poverty among poor communities.

“Partnerships like this provide farmers with the tools and resources that can help revitalise African agriculture and increase opportunities for small farmers so they build better lives for themselves and their families,” Burwell said.

The foundation, formed by Microsoft tycoon Bill Gates and his wife Melinda, has channelled more than R10.6-billion ($1.4-billion) into to agriculture in sub-Saharan Africa and South Asia, Burwell said. The grants are aimed at strengthening the entire agricultural value chain – from seeds and soil to farm management and market access – to sustain long-term hunger and poverty initiatives.