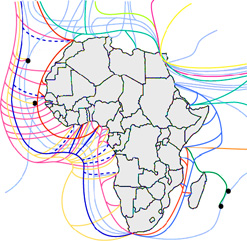 The web of cables that will connect Africa
to the rest of the world by 2011.
(Image: Pyramid Research)

Africa is set for a new revolution – in broadband. Twelve new undersea cables set to go online over the next two years will quintuple the continent’s international bandwidth, reduce the number of unconnected coastal countries from 19 to one, and drop tariffs by up to 72%.

This is according to Africa Connects: Undersea Cables to Drive an African Broadband Boom, a report released in August by Pyramid Research, a telecoms research company based in Cambridge, Massachusetts.

According to the report, the 12 cables – five major ones and seven smaller – planned for launch between the third quarter of 2009 and mid-2011 will remove the most serious obstacle preventing internet service providers from exploiting Africa’s unmet demand for broadband services.

“Through the end of second quarter 2009, 40% of continental Africa’s 47 nations had no direct cable connections at all, forcing operators to rely on expensive satellite links,” said Dearbhla McHenry, analyst at Pyramid Research and author of the report.

“The combination of heavy reliance on satellite and monopoly control of local access to undersea cables meant that prices were also astronomical: Rates for SAT-3, for example, are about US$4 500 to US$12 000 per megabyte per second per month, which is more than 20 times more expensive than bandwidth prices in the US.”

By 2011, total African international cable capacity will have increased by 500% from about 6 terabytes per second (tbps) to about 34tbps.This will stimulate competition in most markets, prompting a cost reduction of up to 72% and radically increasing fixed and mobile broadband penetration from 0.7% in 2008 to 3.0% in 2014.

Although new entrants and smaller players will be able to compete much more effectively, thanks to easier and cheaper access to international bandwidth, the report says satellite operators are likely to lose much of their current subscriber base.

Existing operators will have to act carefully to ensure that they compensate for inevitable price cuts with a greater number of wholesale clients and individual subscribers.

Fears of hypercompetition and dangerous price wars are overblown for most markets, McHenry says, particularly as the fixed markets in most African countries are still awaiting full liberalisation and true competition. But in markets where bandwidth will increase drastically and where the regulatory environment is liberal, the flood of new international capacity may cause some market turmoil.

“By early 2011, we expect that more than half of all African markets will have 3G, while broadband coverage is increasing daily via both wireless and wireline technologies,” McHenry said.

“We forecast that total broadband adoption in Africa will increase at a compound annual growth rate of 28% from 2009 to 2013, as increased competition in the international bandwidth market brings down prices and as new cables support the corresponding increase in demand.”

Africa Connects: Undersea Cables to Drive an African Broadband Boom is part of Pyramid Research’s Africa and the Middle East Telecom Insider report series. The report is priced at $595 and can be bought online or by contacting Amalia Vega at avega@pyr.com.