Artists and the economy was discussed on the second day of the fourth African Union Pan-African Cultural Congress, with speakers calling on governments and private sector leaders to invest in the arts and heritage as a means of uniting Africa through its diversity. 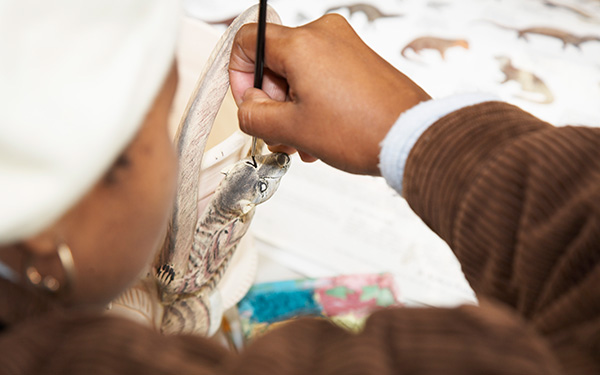 The impact artists made on the economy was one of the topics discussed at the fourth African Union Pan-African Cultural Congress (PACC4), running from 25 to 27 May at the Sandton Convention Centre.

This congress, which promotes diversity, is a partnership between the South African Department of Arts and Culture and the African Union Commission; its theme is “Unity in cultural diversity for Africa’s development”. Cultural leaders from across the continent are discussing how Africans can connect and improve their economies.

N’Goné Fall is an independent curator, art critic and cultural engineering consultant. She spoke about the lack of government investing in contemporary and modern arts, yet internationally there was a huge market for it.

“Europe and the United States have the biggest auction houses and art fares in contemporary and modern art. This boosts the economy, but does not affect us [Africans] locally, because artists are going as individuals to Europe,” she said. “The artists are not seen [by the government] as important and [are] still seen as entertainers.”

She knew of many top South African and Nigerian scholars with PhDs in history of art, but who lived in the US. “Their research grounds are that side. We have not training grounds for them here, so now there are teaching that side. And it’s a pity.

“African governments and the African Union need to realise that they should make art and culture as a component of importance.”

Fall saw artists as visionaries and activists. “An artist is about education, capacity building, empowerment, et cetera. Artists are probing political issues, spiritual and cultural issues. They rely on history in order to inspire the present, the future. They are change agents.”

Mike Dada, the president of the All African Music Awards, reminded the audience that Africa had a lot to offer the world. The “African brand”, however, was created by Western media and observers. “Often times their facts are out of context and distorted. Through that lens [of Africa] we mostly see hunger, war poverty, hopelessness, et cetera.”

He asked the audience, packed as it was with African leaders and representatives, whether they wanted to continue to have others telling African stories, or whether they were “ready to tell our story”.

“The global village, the people, the investors, the young and the old, everyone from different walks of life, they want to listen to African stories.”

Telling our own stories

Using visuals of leaders such as Nelson Mandela and Robert Mugabe, as well as of hungry children, Dada added: “Our people all contribute to the perception of Africa.”

Dr Webber Ndoro of the African World Heritage Fund said that heritage must be a cornerstone of sustainable development in Africa. “Heritage provides potential to create dialogues between developers and communities.”

Although tourism played a huge role in heritage being a cornerstone, locals did not benefit much, he said. His statistics on tourism’s share market showed that 72% went to international companies and less than 5% went to local communities.

“If we look at Victoria Falls and Livingstone as an example, of the 29 hotels and lodges in the area only five of them buy from the local communities,” said Ndoro. “We are trying to improve it. That’s why we are targeting individuals and families.”

Of the 1 007 properties listed as World Heritage sites, he added, only 89 were in sub-Saharan Africa. The process of nominating a heritage site for the list took two years. “Besides lack of interest, there is a lack of capacity for African governments to compile a heritage site to the nomination list.”

The objectives of the congress

According to the African Union, cultural experts, policy makers, members of the private sector and civil society organisations working in the arts and culture sector are attending the congress. Its objective is to take stock of the challenges and record good practices on harnessing cultural diversity to enhance development.

The union said cultural diversity was critical “in the sense that the achievement of the Agenda 2063 vision for an integrated, prosperous and peaceful Africa will depend on the capacity of Africa to overcome the continent’s major post-colonial conflicts by bridging the gap between cultures and promoting mutual understanding among peoples”.