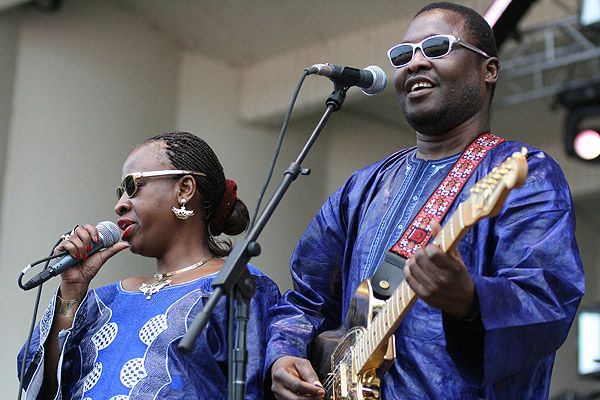 African music, Nelson Mandela once said, is about the aspirations of Africa. “The curious beauty of African music is that it uplifts even as it tells a sad tale. You may be poor, you may have only a ramshackle house, you may have lost your job, but that song gives you hope.”

African superstars Amadou and Mariam, Salif Keita, Oumou Sangaré, Kandia Kouyaté and Didier Awadi sing and rap about the dangers of Ebola, how the disease is spread and how people can protect themselves. With a reggae backbeat and sung in French and indigenous languages the song prods, “Mama Africa get up and stand united as we used to do before for other battles. Ebola you also shall be defeated.”

Over its five and a half minutes the collective delivers warnings (avoid shaking hands and don’t touch the bodies of the dead) and encourages trust in the public health sector. The idea for the lyrics came from Carlos Chirinos, a professor at New York University specialising in music, radio and social change.

As Chirinos told the New York Times, rebuilding confidence in the public health sector is as important as information on keeping safe. “We are combating myths about Ebola not being real, or that it is something that can be cured by a church, or a traditional healer. There have been cases where health teams have turned up at a village and were turned away, or were stoned – some people have been killed. So we’re trying to send a message, that the only way to stop Ebola is to trust in the health services. And also, that there is hope – that the crisis can be overcome.”

In England Sir Bob Geldof wants to do for Ebola what he did with Ethiopian famine 30 years ago, swoop in and save Africa from itself. The reboot of Band Aid’s Do They Know it’s Christmas has not been met with universal applause. For some African musicians it smacks of cultural imperialism.

Solome Lemma, co-founder of Africa Responds, points out that the original single was a two-edged sword. While raising money and awareness, “it left Ethiopia, and really the rest of Africa, with a terrible legacy that painted us as famished, poor, and downtrodden”.

Africa Responds coordinates grassroots efforts to educate and contain the spread of Ebola. While Lemma and her partners are thankful the eyes and resources of the world are being marshalled, they believe that any effort requires partnerships with Africans working in areas affected by the epidemic.

“If Geldof was really committed to using his platform as a musician, then work with African artists. There are a multitude of artists from the three most-affected countries – Liberia, Sierra Leone and Guinea – and the rest of Africa that he could have brought on to do a different song.”

As far back as May African musicians have been recording songs about Ebola. In Liberia Unicef’s Ebola Is Real, a collaboration with local radio station Hott FM, was recorded to dispel the rumour that the virus was a political scam.

In Monrovia and Conakry Ebola In Town, recorded by local musicians D12, Shadow and Kuzzy, inspired a dance that involved no touching. In Senegal, with a single conformed case, Xuman used Rihanna’s Umbrella as a backing to record Ebola Est La (Ebola Is Here).

What the multitude of songs recorded in affected countries have in common is information and messages about prevention. The Nigerian Stop Ebola Virus Campaign song urges people to “always wash hands with soap and water”.