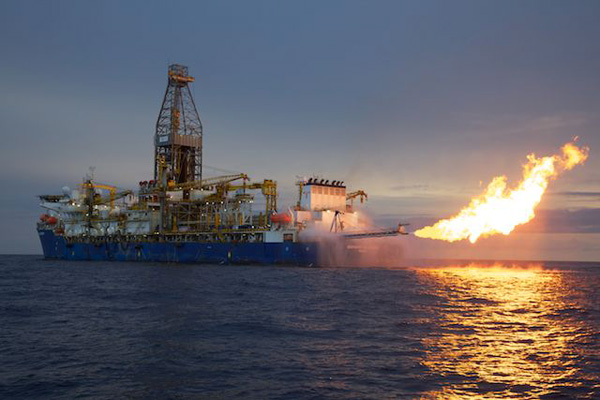 A drillship conducting a flow test in a natural gas field off the coast of Mozambique. Recent examples of China’s involvement in Africa include China National Petroleum Corporation’s acquisition of a stake in Mozambique’s fields, and China National Gold Group Corporation’s investment in the Republic of Congo. (Image: Anadarko)

China is still unquestionably Africa’s largest single trading partner, and the continent remains an important and strategic investment destination for the 2 000 or so Chinese companies operating there, even as the Asian economic powerhouse shows signs of a slowdown.

Research by the Standard Bank Group estimates Sino-African trade to have reached US$210-billion in 2013, up 6% from $198-billion in 2012. Chinese imports from Africa, mostly hard commodities, reached some $115-billion last year while Chinese exports to the continent totalled about $94-billion.

“When Chinese firms consider investment destinations around the world, Africa is always top of mind,” said George Fang, Standard Bank’s Beijing-based head of mining and metals in Asia. “Africa is usually among the first destinations that are considered by Chinese companies that are looking to expand internationally, not only because of its abundant natural resources but also because of its rich cultural heritage, which in many ways is more similar to Chinese custom than that of the Western world.”

Despite China’s official Purchasing Managers’ Index slipping to a six-month low of 50.5 in January, the research suggests the Chinese economy will expand by 7% in 2014. This follows economic growth of 7.7% in in each of the previous two years.

‘Africa and China are fundamentally intertwined’

Fang said this slowdown is partly due to China’s government placing greater emphasis on more sustainable economic expansion, rather than simply chasing growth for its own sake. Although the global economy has undergone a fundamental paradigm shift since the 2008 financial crisis, Africa remains an important future strategic partner for China, he said.

“The economic ambitions of Africa are ultimately the same as those of China – to open up new worlds of opportunity for its people. When China visits countries in Africa it creates partnerships and investments; it doesn’t leave a vacuum behind.”

Data from the Information Office of the Chinese State Council shows that China’s cumulative investment in Africa more than doubled from $9.33-billion in 2009 to $21.23-billion in 2012. The Standard Bank Group estimates that China has loaned African governments between $30-billion $40-billion, the bulk of which has been used to improve infrastructure on the continent.

China also played an active role at last year’s Brics Summit in Durban, at which the Multilateral Infrastructure Co-Financing Agreement for Africa was set up. This paves the way for new co-financing arrangements and investments for infrastructure projects across the continent.

“The economic futures of Africa and China are fundamentally intertwined,” said Fang. “Africa’s rich natural resource base coupled with its emergence as one of the world’s fastest growing economic regions suggests its importance to China is only likely to increase over the coming years.”