The youth population is big and is growing; urbanisation is growing even faster. These factors present possibilities and pitfalls: a young population may be dynamic and bring economic advantages but at the same time, too many young people raises the potential for conflict. 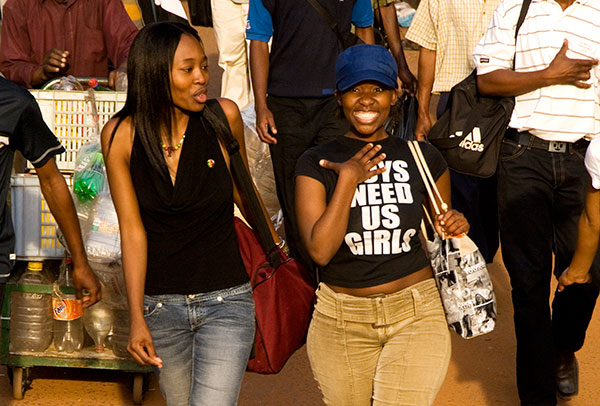 Africa is the youngest continent in the world with a large working age population. Most of these are flocking to the cities. This means the continent’s economy stands to develop rapidly in the near future. (Image: Media Club South Africa)

Africa is young – and it continues to get younger as populations around the world are getting older. With over 40% of its working age population between the ages of 15 and 24, it is the youngest continent in the world. There are almost 200 million youths in Africa and, according to African Economic Outlook, that number will double by 2045.

In a Brand South Africa report on the country’s growing youth population, researcher Leigh-Gail Petersen said a youthful population could be economically beneficial. “There is a large working age population, meaning more income which leads to better support for citizens and more improvements in the country’s development.”

This means the youth could lift Africa from its poverty-ridden, economically poor present and into a better future.

In a list compiled by the UN in 2012 of the 10 youngest populations in the world, eight were in Africa. People under the age of 25 in Uganda, Chad, Niger, Angola, Somalia, Zambia, Mali and Malawi made up more than 66% of each country’s population.

The only continent that can challenge Africa is Asia, yet its youth numbers are on the decline. Projections by the Population Reference Bureau indicate that Asian youth will only make up 18% of the population in 2050, a marked decrease from 26% in 2013.

Yet some analysts believe Africa will follow Asia soon. In a 2009 article on Africa’s booming population, The Economist forecast a drop in the continent’s fertility rate to three per family by 2030, a 50% drop from the 1990 rate. And as Africa’s people get richer, become better educated and use contraceptives more regularly, that number will drop even further, to 2.5 children per family by 2050.

One of the major concerns with Africa’s rise in youth is that there are fewer jobs available. This, according to Norwegian demographer Henrik Urdal, could lead to conflict in the future. He said a country’s risk of conflict rises four percentage points for every one-point increase in the youth population. This was particularly evident during the 2011-2012 Arab Spring in North Africa, when young people took to the streets demanding change and fulfilment of their aspirations for better lives.

Petersen said that youth were trying to live with a future in a society created by previous generations that largely remained in control. This meant they still had to deal with high unemployment, access to quality social services, poor leadership and crime.

Youth throughout Africa are tackling a less-than-ideal future. And even though they stand to inherit the continent, Petersen said youth were still seen as an addition to society and not as an integrated part of a whole.

UN Secretary-General Ban Ki-moon said in an address on Africa Day in 2011 that despite advances in education and economic growth, “progress remains fragile, inequalities are widespread and young Africans face major difficulties in finding decent jobs and participating in decision-making”.

Growing alongside Africa’s youth population is its cities. The UN says urbanisation on the continent is the fastest the world has ever seen. Soon Africa will have 80 cities with more than 1 million people each and several megacities, such as Kinshasa, Lagos and Cairo, with more than 10 million residents each. Urbanisation, said The Economist, could present a solution to Africa’s youth demographic problems.

The youth are flocking to the cities and are adapting quickly to these new cityscapes. In the 2015 Youthful Cities Index, eight African cities are in the top 55 most youthful cities in the world. Johannesburg leads the continent at 35th position with Casablanca, Lagos, Durban, Nairobi, Dar es Salaam and Accra following. The survey, however, ranks cities not by population alone but by 19 other attributes that include safety, entrepreneurship, creative arts and sports.

Johannesburg is a favoured city for youth for its affordable public transport, easy access to health care and its diversity – in the index, it is ranked 10th in the world for diversity. Johannesburg is home to people from various cultural backgrounds who speak different languages; it offers a range of foods and is open to gender and sexual issues.

Johannesburg might be appealing to young professionals, but for young entrepreneurs, Lagos is the place to be. Youthful Cities says the Nigerian city has a strong entrepreneurial culture and business incubators are springing up across town.

Casablanca, in Morocco, is also growing into a youthful hub. The city ranks highest in access to financial services, safety, affordability and employment for young Africans. And despite the Arab Spring, the World Bank has reported that Casablanca’s economy is stable.