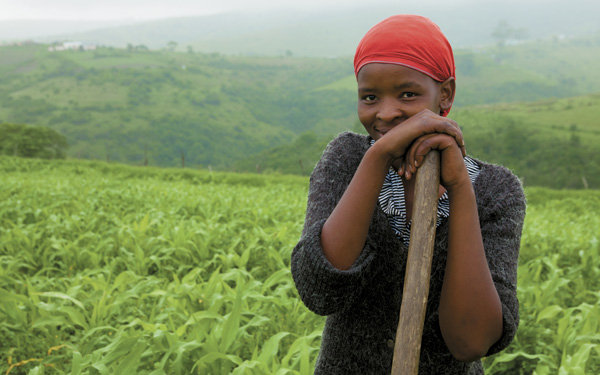 African agriculture is about to flourish, write Olusegun Obasanjo and Bob Geldof. This is one of the most fertile regions on earth, with 60% of the world’s uncultivated arable land.

While one in four Africans still go hungry, and the continent still imports 40% of its food needs, we believe recent developments show tremendous promise; so much so that we are now investing significant amounts of our own money in agriculture ventures. Africa’s huge potential is an opportunity stretching far beyond the continent itself. It could be a driver of global growth and food security. Over the past decade, the continent has harboured some of the fastest growing economies in the world, to a large extent linked to oil, gas, and mining.

Growth like that draws investors looking for further opportunities and African agriculture has an abundance of those: in equipment, transport, irrigation and infrastructure; investment for farmers to go from subsistence to commercial farming; and investment in training, research and support for smallholders as well as small and medium enterprises. Such investments could deliver manifold returns; for the investors, yes, but also in terms of jobs, food security and better incomes for small farmers.

Yet Africa still lacks viable ways of channelling investment money to the millions of dynamic entrepreneurs with viable business ideas in sectors such as farming, aquaculture and agroprocessing. Indeed, Africa is losing huge potential investments each year. This loss has knock-on effects for jobs and economic growth.

The challenge is to remove the obstacles that prevent this investment money from reaching the continent.

The Africa Progress Panel, chaired by former UN Secretary-General Kofi Annan, will this year explore ways of meeting this challenge. Its report will focus on how African farmers and fishing communities can access the money they need to create green and blue revolutions in Africa.

One crucial priority is to reduce the cost of money. Real interest rates on loans to agricultural projects (and to small shops and industry ventures, for that matter) exceed 20% in many African countries. No business can thrive if it has to borrow at those rates. It should be possible to access capital well below 10% – even in so-called frontier markets – if we simplify banking, reduce perceptions of risk, and introduce functioning insurance.

Venture capital and equity must also be made more available. Financing from international and regional financial institutions could be put to good use by guaranteeing and underwriting equity investors who invest in small enterprises. And we need to make Africa’s stock markets accessible to small and international actors.

Farmers also need well-regulated commodity exchanges so they can sell their products at global market rates, rather than to monopoly buyers who squeeze the prices.

The role of African governments

Should governments just “get out of the way” and let the private sector sort these questions out by itself? Absolutely not. If the past five years of global crisis have taught us anything, it is that markets work best when they are well regulated for the benefit of society.

Governments need to ensure, for example, that smallholder farmers – especially women – can access new sources of credit and equity, and that they are not squeezed out by large agribusiness. Governments can encourage the creation of cooperatives, provide technical support and training, help with the development of new seed varieties, invest in roads and water systems, and protect against predatory investors.

Africa needs large, commercial farms as well as small ones. But it doesn’t need foreign investors who appropriate land and water to supply food and biofuels to other countries, while creating few jobs and driving populations from their homes. Only strong and principled policies by responsible governments can ensure the right balance between large and small, foreign and local.

Such a balance is already being struck in some countries. Nigeria’s agriculture minister has launched an ambitious plan to add 20-million metric tons of food to the domestic supply, while creating 3.5-million new jobs. In the first year of its transformation push, Nigeria reached over 75% of its job creation target and has met the first Millennium Development Goal, cutting hunger by half, three years ahead of schedule.

Other countries are making similar strides. Such success stories exist all over Africa. If we scale these up, the continent can rid itself of hunger within a decade, create jobs and generate growth for itself and far beyond.

Obasanjo is a former President of Nigeria. Geldof is a musician, businessman, and founder and chair of Band Aid, Live Aid and Live8. Both are members of the Africa Progress Panel. Chaired by Kofi Annan, the former secretary-general of the United Nations, the Africa Progress Panel includes distinguished individuals from the private and public sectors who advocate on global issues of importance to Africa and the world.

This article was originally published on This is Africa Online on 30 January 2014.