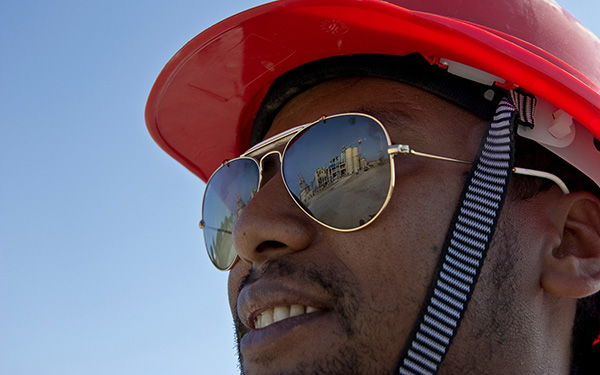 A worker at the National Cement Share Company in Ethiopia. Demand for cement to feed the country’s building boom is set to more than double in the next five years. (Image: Simon Davis, DFID)

A new report by global financial services group Ernst and Young, Africa 2030: Realising the Possibilities, released on 7 October, highlights Africa’s tremendous economic progress over the past two decades with the message: Africa’s rise is real.

“Despite the clear evidence of sustained progress, there are many who remain sceptical about Africa,” the report says. “It is important for us to continue to provide evidence of the continent’s progress, so that decisions are driven by facts rather than often outdated perceptions.”

The first chapter highlights this evidence, summarising the key drivers of African growth since the end of both the Cold War and apartheid. It builds on EY’s annual Africa Attractiveness research series which, since 2011, has highlighted the continent’s steady rise. The research includes investor surveys and analysis of foreign direct investment and broader socioeconomic trends, and has helped provide quantitative substance to the growing perception that African markets offer exciting growth and investment opportunities.

Companies already established in Africa have a far more positive perpective on the continent than those who view the region from the outside – a distorted view that impedes African progress. (Graphic: Ernst and Young)

“Africa’s rise over the past decade has been very real,” EY Africa chief executive Ajen Sita said in a statement. “While there are still a number of sceptics, we have developed a robust data and knowledge base to help provide quantitative substance to support the business case for Africa. The evidence of Africa’s clear progress is irrefutable.”

Africa 2030: Realizing the Possibilities also summarises the views of a diverse group of leaders with interests in Africa on what the future of the continent might look like, identifying the factors that could drive change and success.

“As important as it is to continue to provide evidence of the continent’s progress, it is perhaps more important to shift the focus towards the future of Africa, and what it will take to sustain and accelerate the progress we have seen over the past 15 years,” Sita said.

A quote from The Economict in the Ernst and Young report.

A key factor, mentioned by many of the contributors, is the proliferation of mobile telecoms, the convergence of technologies and the ability for these to drive financial inclusion, government efficiency, trading opportunities, and the delivery of education, healthcare and other services to both urban and rural people.

Optimism comes through, tempered by notes of caution. A consistent theme in the contributions is that trade between African countries is substantially lower than it could be. Laws and regulations still impede cross-border trade – a stumbling block that must be removed to achieve African prosperity.

Agriculture also gets attention, particularly the need to move from traditional subsistence agriculture to large commercial operations able to produce on the scale required by a continent in transition.


The depth of human resources, and the availability of a future pool of labour on a continent populated by young people, raised both excitement and concern – excitement for the promise of a workforce able to drive the African economy of the future, and concern about education and the creation of skills needed for growing economies.

But the dominant view is that change is real. Economic growth and development will continue, and will be driven by a burgeoning African middle class with growing levels of discretionary income, growth in local entrepreneurship and investment in bridging the infrastructure gap.

Past and projected GDP growth in North Africa and sub-Saharan Africa – SSA. (Image: Ernst and Young)


“It is clear to us that we Africans are presented with a wonderful opportunity to make a genuine difference in our working lives,” Sita said. “The potential exists for us to be part of an African future that would have been virtually unimaginable a generation ago.

“The reality, though, is that this future is neither inevitable nor will it happen without active participation and commitment from multiple stakeholders. This is the time and place for us to collaborate to realise Africa’s future; it is our generation of leaders that can make it happen.”

Five priorities for the future

The report stresses that active dialogue and collaborative action is required to realise Africa’s possibilities. It presents five priorities for action that EY consider to be most critical to a successful African future.

The central premise behind creating shared value is that the competitiveness of a company and the health of the communities and economy around it are mutually dependent. It is a fundamental business philosophy that recognises that profit and purpose can coexist and be mutually reinforcing. A philosophy of shared value is underpinned by the notion of a working world with increased trust and confidence in business and capital markets, the development of talent in all its forms, greater collaboration across private, public and social sectors, and inclusive, sustainable growth at its heart. This, the report says, is more relevant in the African context than ever before.

The relationship between government and business across many parts of Africa is not always as engaging and productive as it could and should be. Too often business is viewed as part of the problem. In contrast, government and business, both local and international, need to become partners both in embracing a philosophy of shared value and driving a common agenda of inclusive, sustainable growth. Partnership, cooperation and collaboration across the private, public and social sectors could be a powerful force for transformative change and growth.

Entrepreneurs provide one of the main engines of growth in any healthy economy. They act as vital agents of change by developing new products and services, implementing more efficient production methods, and creating new business models and industries. Small and medium-sized enterprises will be the main drivers of the job creation required to realise inclusive, sustainable growth. For organisations genuinely committed to shared value and collaborative partnerships, the promotion of local content and enterprise development should clearly be a key business priority.

With the shifting dynamics in the global economy, Africans have a unique opportunity to break the structural constraints that have long marginalised the continent. This will, however, only be achieved by driving greater regional coherence from the current patchwork quilt of 54 sovereign states. Regional integration and stronger regional institutions (such as the African Union and regional economic communities) are key to promoting greater levels of regional investment and trade, because they will make it much easier and more efficient to conduct cross-border business, and will create markets with greater critical mass, coherence and density of economic activity.

Ultimately, regional integration will be enabled by sufficient investment in infrastructure. Road networks, electricity access, telecommunications, and trade infrastructure such as ports, highway corridors and railroads will physically connect markets, reduce the cost of delivered goods, facilitate the mobility of people and products, remove productivity constraints, and enhance the overall competitiveness of the region.

“Whatever the differences or similarities in perspective, the point is that active dialogue and collaborative action is required for us to realize Africa’s possibilities,” the report says.

“All of us with a passion for Africa are presented with a wonderful opportunity to work together to make a genuine difference. The time and place for Africa’s future is here and now. We are the generation of leaders that have to seize the opportunity and make it happen.”

Ernst and Young will host the second South African Competitiveness Forum, and initiative of Brand South Africa, at its offices in Sandton, Johannesburg on 4 and 5 November 2014. Follow the conversation via #CompetitiveSA.