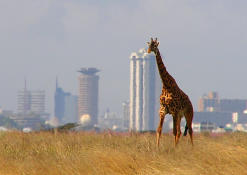 A giraffe in Nairobi National Park, with Nairobi’s skyline in the background. 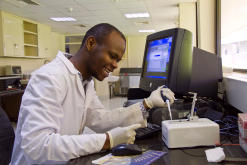 An MSc student at Kenyatta University works with ICRISAT-Nairobi on the use of molecular markers in agriculture to speed up success in plant breeding programmes. 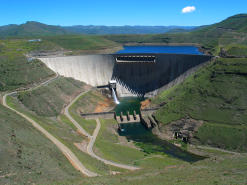 The Katse Dam, a concrete arch dam on the Malibamat’so River in Lesotho, is Africa’s second largest dam.

Africa’s time is now. In academic studies, institutional reports, business journals and the mass media a new story about Africa is emerging: one of growth, progress, peace, potential and profitability.

Never in the half-century since it won independence from the colonial powers has Africa been in such good shape. Its economy is flourishing. Most countries are at peace.

So says a March 2013 Economist special edition on Africa. It goes on:

Mobile phones are as ubiquitous as they are in India and, in the worst-affected countries, HIV infections have fallen by up to three-quarters. Life expectancy rose by a tenth in the past decade and foreign direct investment has tripled. Consumer spending will almost double in the next ten years; the number of countries with average incomes above $1 000 per person a year will grow from less than half of Africa’s 55 states to three-quarters.

And yet, despite these and other stories, a stubborn perception gap persists – the 2012 Ernst & Young Attractiveness Survey: Africa goes so far as to call it a perception “chasm”. Tellingly, this gap is between those global companies who do business in Africa, and those who don’t.

While foreign direct investment ramps up, Africa still lags in capturing the global imagination. The rupture between stereotype and reality must be mended with new stories about Africa, stories of growth and opportunity, democratic progress, conflict resolution and human development.

Africa’s economic performance over the past decade has outstripped any previous period in history. Right now, it’s the fastest growing continent on the planet, with average GDP rising at an impressive 6% and combined GDP set to hit $2.6-trillion by 2020. Foreign direct investment is flooding into areas once seen as hopeless.

Matching this pattern, Africa’s economic output has almost tripled since 2003. The International Monetary Fund forecasts that, over the next five years, seven of the 10 fastest growing economies in the world will be African.

Part of this growth – but by no means all – has been a surge in commodities. From aluminium to zinc, passing copper, diamonds, oil and platinum on the way, Africa’s wealth of natural resources means commodities contribute a third to GDP growth. This excludes indirect benefits, such as the skills, contacts and capital spread by other countries as their citizens set up operations on the continent.

The commodities boom has largely been driven by China, now Africa’s biggest trading partner. African trade with China has risen from $11-billion to $166-billion over the past decade.

But as the 2007-2008 financial crisis made clear, Africa’s economy is not all about commodities. While the rest of the world floundered, African economies stood firm – some accelerated – thanks to stable domestic demand.

A significant part of the African growth story is about higher domestic consumption – growth is not unbalanced; it is not entirely dependent on resource exports.

Unlike the commodities boom of the 1970s, when the wealth was hoovered up by autocratic elites alone, today’s growth is being enjoyed by the people of Africa, with rising incomes driving further growth. In the last 10 years real income per person has increased by more than 30% – as opposed to the previous 20 years, when it shrank by about 10%.

Once-scarce consumer goods are everywhere. Africa has three mobile phones for every four people, the same as India. It’s predicted that by 2017 about 30% of households will have a television set, an almost fivefold increase in 10 years. Nigeria produces more films than the US. In opinion polls, almost two-thirds of Africans think this year will be better than last – double the European rate.

According to a 2012 report by McKinsey & Company, African households’ rising incomes offer enormous untapped growth opportunities for consumer companies. Startlingly, the report found that urban Africans spend more on clothing and food than their counterparts in the massive economies of Brazil, China and India. More than this, 84% of Africans were “exceptionally optimistic about their economic future”.

And it’s not only consumer spending that’s on the rise: human development is, too. Increased revenues have allowed increased spending on education, healthcare and welfare.

Across Africa, secondary-school enrolment grew by 48% between 2000 and 2008 after many states expanded education programmes and scrapped school fees. Malaria deaths in some of the hardest-hit countries have fallen by 30% in the past decade, and HIV infections by up to 74%. Broadly speaking, African life expectancy has increased by about 10%, and most countries’ child mortality rates are falling sharply.

From the colonial period through the Cold War and after, violence, warfare, dictatorship and regime instability went together, combining to increase inequality, stunt economic growth, deter investment and cripple education. But the past two decades have seen democracy and peace breaking out across Africa.

According to the Polity IV data series from the University of Colorado, which measures global democracy on a scale from -10 (most autocratic) to +10 (most democratic), African governments’ average rating has risen from a low of -5.9 in the mid-1970s to close on +2 in 2010 – an eight-point rise on a 20-point scale.

During the Cold War, the US and USSR vied with each other to prop up violent dictators they hoped would protect their interests. As the Berlin Wall fell only three of Africa’s then 53 countries were democracies. Today 25 of of the continent’s 55 countries are largely democratic, with many more beginning to hold what The Economist calls “imperfect but worthwhile” elections – 22 of them last year alone.

At the end of the Cold War it was virtually unknown for a ruling African party to be peacefully unseated by elections. But in 1991 Benin did it, and since then peaceful and democratic regime change has happened over 30 times. Today only four of Africa’s 55 countries lack a multiparty constitution, and two of those, Libya and Somalia, are on track to establish one soon.

Democracy is good for business, for the stability and efficiency of state institutions, for inoculating against corruption, for developing human capital. On the whole, Africa’s flourishing democracy is improving governance: to get re-elected, politicians must deliver.

“Across Africa both voters and leaders are better educated than they were even half a generation ago,” The Economist says. “Many of those in power are the first in their families with a university degree. Standards of political debate have risen thanks to better schools, modern media and the return of diaspora members who bring new ideas with them.”

And wars are ending. Countries that once seemed hopeless cases, embroiled in civil and cross-border conflicts that dragged on bloodily for decades, are now peaceful, stable and putting their energies into their economies.

After millions of deaths and hundreds of refugees in a civil war that lasted a quarter of a century, Angola has now known peace for over a decade – and is one of the fastest growing economies in the world.

The number of armed conflicts in Africa has fallen from over 30 at the end of the Cold War to around a dozen today. Over the same period, the number of successful coups fell by two-thirds.

Chad is now in peace – after four civil wars – as are many, many other long- and short-term conflict zones: Ethiopia, Mozambique, Eritrea, Liberia, Rwanda, Burundi, Sierra Leone, South Africa, Kenya … Even Congo, Somalia and Sudan are much less violent than they used to be.

Like Angola, Sierra Leone has been at peace for a decade, after an 11-year civil war that killed at least 50 000 people. Today, violence is rare: fewer than a hundred people out of 7-million are murdered in a year – a fifth of the rate in New York.

As Ernst & Young’s eye-opening African attractiveness survey found, those who do believe in Africa’s future are those who do business here. Those who don’t, don’t.

“Sceptics retort that Africa has seen false dawns before,” The Economist writes. “They fear that foreign investors will exploit locals and that the continent will be ‘not lifted but looted’.”

But there is no doubt that the fundamentals are in place not only for current growth, but increasing and stabilised prosperity in the future.

The biggest reason to be hopeful is that it takes time for results from past investment to come through, and many such benefits have yet to materialise. Billions have already been put into roads and schools over the past decade; the tech revolution has only just reached the more remote corners of the continent; plenty of new oilfields and gold mines have been tapped but are not yet producing revenues.

In late 2012, the influential Institute for International Finance, after noting high levels of interest in Africa among its members – over 450 of the world’s biggest banks and financial institutions – released its report on sub-Saharan Africa. It had crunched the numbers, looked at real conditions on the ground, and reached a conclusion: Africa’s rising is no false dawn. It’s the real thing.

“After emerging Asia, Africa is the fastest-growing region in today’s world,” said George Abed, head of the institute’s Africa and Middle East division.

“Many countries on the African continent have achieved great progress in stabilizing their economies and consolidating their rates of growth. What is remarkable about this outcome is that it has been achieved during a period of unprecedented global financial turbulence. There are challenges ahead for Africa, but the trend of solid growth of the past decade looks sustainable over the medium term.”