There was plenty of opportunity on the continent, and particularly in South Africa, according to foreign journalists covering the African Union 25th summit. But countries could not ignore the challenges facing them. 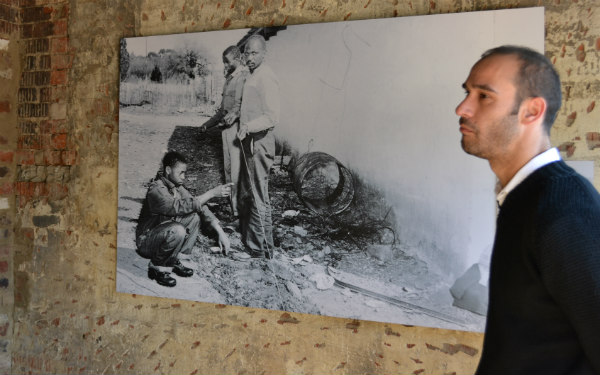 Spanish journalist Jaime Velazquez at Liliesleaf Farm listening attentitively to what the tour guide had to say about the documented experiences of the people who used the farm as a safe haven and base of operations. (Image: Shamin Chibba)

There are many possibilities in Africa and the continent has a bright future; but it still has a way to go to achieve the economic and social harmony for which it strives. These were the sentiments journalists from China and Spain shared during a media tour of South Africa’s historical attractions.

The journalists are covering the 25th African Union (AU) Summit, being held in Gauteng from 7 to 15 June. South Africa is hosting the event for the first time since its formation in Durban in 2002.

During the summit, on Tuesday, 9 June, the journalists visited Liliesleaf Farm, where police captured 19 African National Congress members in 1963, and Sterkfontein Cave in the Cradle of Humankind, where one of the world’s oldest hominid fossils, known as Mrs Ples, was found.

Surrounded by monuments to South Africa’s history, Spanish freelance journalist Jaime Velazquez said the country’s future would be determined by its people. “You can see that there are still a lot of differences in the country and I think that most of the people want to overcome them… Social and economic differences are still there, you can see them… [But] my perception of South Africa right now is that it’s a wonderful country with a lot of possibilities. I think there’s a real will from South Africans to overcome their differences and live together.”

Velazquez has been living in South Africa for four years, covering news for Spanish media in his home country, Mexico and Argentina. He said most of his experiences had been positive. “South Africa is a country where you can live. It’s a country where even though there is a problem with security it’s not an extremely unsafe country as long as you’re on the right side of society and that’s something that I learned later.”

Chuanshi Zhang, a journalist for China’s largest news agency, Xinhua, said that when he first arrived in South Africa, he did not expect it to be so well developed. “I thought, just as the majority of the world thinks of Africa, as the least developed [continent] and that the infrastructure isn’t good. It was really beyond my expectation.”

Now that he has lived in Johannesburg for two years his perception of the country has changed. Yet, he said the government still had some work to do if it was “to be perfect”. “There’s still a long way to go because after apartheid it seems like there are other things stuck there. The economy, infrastructure and other aspects are the same as the early nineties.”

Zhang is attending the African Union summit and said he would look to write about Sino-African relations and how the Far East country was playing a more important role in the continent’s economic development.

Less of a Rainbow Nation

Velazquez has noticed that in the last two years, South Africans have been seeing themselves less as the Rainbow Nation and more part of the cultures from which they come.

South Africa was playing an important leadership role in the African Union because of the rights and freedoms it had. “South Africa has been very active in many conflicts on the continent and always looking for a peaceful solution. So I think that they are holding that role of a regional power that is attached to the values of South Africa as a peaceful way of solving problems.”

However, he said South Africa may have become a victim of its own success. “I think that sometimes the other African countries see South Africa as a little bit arrogant and that they are trying to impose themselves.”

Velazquez was impressed by the way South Africa organised the summit at such short notice. Chad was the initial host but had to withdraw because of the Boko Haram threat. South Africa stepped in at the last minute. “It’s a country that can first of all organise a summit in a very short period and also it’s probably one of the few countries in Africa that can guarantee 54 heads of state. To host it effectively and safely says a lot about the country.”