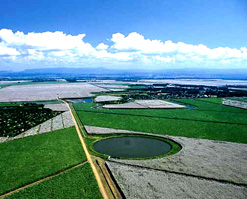 An international investment company that recently set up office in South Africa is optimistic that Africa will fast become the focus of investors looking for alternatives in the wake of the recent US financial crisis.

According to Jon Maguire, the chief investment officer of Cru Investment Management, although there’s been a move towards the east, Africa may not be a far-off contender.

“While the world is definitely moving east in terms of population mass, places like China don’t have as much money as people think they have and their economies depend heavily on the US.”

Maguire believes that despite economic instability across the world, some niche market opportunities are available in sub-Saharan Africa.

One of the factors says that makes Africa attractive to foreign business, he says, is the low investment base the continent operates on.

According to Maguire the three top problems facing the world are rapid population growth, urbanisation and climate change.

He says that in a bid to solve these problems, Cru has set up a food and agricultural project in Malawi, which the company believes will generate superior returns over the next few years.

The new Africa Invest Fund will invest in commercial agriculture in the southern African country with over 2 500h of land under its own control and another 4 000h in similar schemes run by the company.

The fund will allow investors from the Middle East to buy into the project; thereby helping the poor communities while making a profit the same time.

“Our decision to make the new fund Sharia-compliant will mean that Gulf investors, well-known for their philanthropic initiatives world over, would be participating in community initiatives to generate employment for the poor in Africa and enable them to help themselves out of poverty,” he says.

Company estimates indicate that the monies raised through its Africa Invest Fund and the Africa Invest Capital Protected Plan for Malawi have generated jobs for over 2 000 people and helped 8 000 families take part in other farming schemes.

A January 2008 survey conducted by the International Monetary Fund (IMF) has found that two African countries, Ghana and Gabon, successfully broke through international capital markets in the second half of 2007.

Ghana successfully entered the international capital market in September 2007 when it issued a $750-million (R75-million) bond to repay its debt.

It was more than four times than what the IMF had expected. Gabon, in spite of increased volatility in the international capital markets, followed in December 2007, with a $1-billion (R100-million) bond issue to repay Paris Club debt.

The bond sales are the outcome of the growing interest of international investors in the continent and in other similar emerging and developing countries worldwide.

The countries, which made significant progress toward macro-economic stability and debt sustainability, have also succeeded in selling treasury bills in their own currency to foreign investors.

It’s reported that by the end of June 2007, foreigners held about 11% of Ghana’s domestic currency government debt, valued at more than $400-million (R40-million). This figure in Zambia stands at about 14%.

In May, Russian investment bank Renaissance Capital (RenCap) showed its boosted confidence in sub-Saharan economic gains by buying stakes in two broker firms, in one in Ghana and another in Zambia.

In a statement released by the company regarding its new stake in New World Investments in Ghana and Pangaea/EMI Securities in Zambia, gave the group an opportunity to play a role in the exciting development of both countries’ financial markets and their importance in the region as a whole.

“So far, few have invested in local operations on the ground, with only Standard Bank of South Africa buying IBTC in Nigeria.”

Cornthwaite, also head of RenCap’s global investment banking, will soon be relocating to Nigeria, where he will be overseeing the company’s existing operations. “As the financial centre of sub-Saharan Africa, Nigeria is already experiencing rapid and sustainable economic growth, with an increasingly liquid and dynamic capital market. This growth and development is poised to continue for several years.”

RenCap has also earmarked Kenya and Angola for business expansion.

A recent survey of emerging cities around the world has ranked the city of Johannesburg 11 out of 65 scrutinised for their growth potential.

The MasterCard Worldwide Emerging Markets Index has put South Africa up next to top emerging economies like Brazil, Russia, India and China, the so-called “Brics”.

Each of the 65 cities was assessed on eight criteria spanning from the economic, business and commercial environment; development; education and IT connectivity.

Top South African economist Mike Schussler says although Africa has perfomed well in the index, Asian countries dominated, “It’s amazing that China had 15 of the top 30 cities in the emerging market universe.

“It is really an amazing achievement and you can see Johannesburg in 11th place, with Cape Town and Durban also featuring in the top 40.”

According to Schüssler, this is the second time that South Africa has seen Johannesburg ranked and the first time for Cape Town at 33 and Durban at 37.

Of the eight criteria used to rank the different countries, South Africa came up tops in the business environment, which according to Schussler “is the most important”.

The business environment had a 16.6% weighting against the other dimensions.