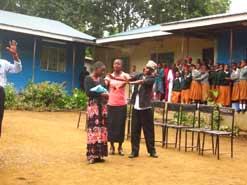 Pupils in the ITLP programme perform in a play for members of their community in Uganda. 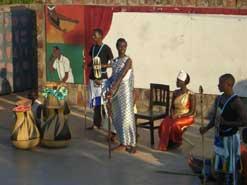 In another production, complete with props, in Uganda, pupils show what they have learned. 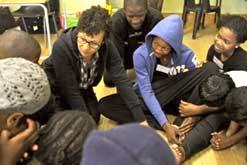 Playwright Judy Tate (in glasses) discusses the day’s work with participants of an ITLP workshop in Khayelitsha, Cape Town in June.

Uganda has been hailed over the past two decades as one of the champions of the fight against HIV/Aids in Africa, thanks to the country’s proactive approach to dealing with the disease in the early 1990s.

A massive government-led awareness campaign in 1989 led to a significant drop in new infections over the next few years. In 1992, 18% of the population had been infected, but the number dropped to less than half over the next decade and in 2001 was recorded at 6.4%.

The good news was that the people of Uganda were avoiding infection in large numbers and so the focus could shift towards providing proper treatment for those who were already infected. The bad news, however, was that efforts to hold awareness drives waned, and the multi-sectorial approach of the government lost some of its hold. Soon enough, more and more Ugandans were becoming infected again. Figures released in 2011 show an infection rate of 7.2%.

It was in 2009, at a press conference held ahead of World Aids Day, that the secretary-general of the Uganda Aids Commission (UAC), Dr Kihumuro Apuuli, admitted that a shift in the government’s campaign focus had brought the country to the point where new infection numbers were once again rising, citing 2002 as the year that this became notable.

Although the growth in new infections was slower than that of the 1990s, Apuuli’s organisation asserted that the general attitudes of people towards the disease needed to change. Their latest figures at the time showed that 65% of the cases were among married couples.

The most affected population group is the 15-49 age demographic, and there are more women in the statistic than men, which intensifies the danger of mother-to-child infection in pregnant women.

Authorities concede that the government alone will not be able to tackle the problem and achieve the results of 11 years ago, but with as much participation as possible at community level, the most vulnerable groups can get something out of the awareness campaigns.

Enter the International Theatre and Literacy Project (ITLP), a US-based NGO that brings theatre artists from all over America to developing countries to conduct workshops on writing plays and performing with school pupils and teachers. Started in 2005 by Marianna Houston, former director of the New York-based Theatre Development Fund, the ITLP has worked in countries like Tanzania, Malawi and Rwanda since its establishment.

The programme’s focus is on community development and awareness of HIV/Aids, and by involving young people in the performing arts, it is able to convey messages to the broader community by way of writing plays which the pupils then perform for members of their communities, in the familiar environment of their villages.

“Everyone gathers around and there’s a platform and someone has a little bit of a costume and you’re going to learn a lesson,” explained Houston in a recent interview with Media Global News, a news site with a focus on the developing world.

Throughout the performances, there are discussion intervals where audience members tackle the conflicts highlighted in the scene in order to find a solution.

Houston feels that this form of awareness is more effective because the audience gets to learn from trusted members of their community, and this strengthens the likelihood of them changing their behaviour, and in turn helps reduce the impact of the disease.

The benefits of theatre

ITLP’s workshops take place over a course of two weeks and are facilitated by the organisation on the one hand and the teachers at participating schools on the other. The pupils take part from Monday to Friday during a break in the school term, and at the end of the two weeks, they perform a play that they have written themselves.

Although the plays are in English, summaries are made available that are translated into the language commonly spoken by members of the community.

The work by the cast does not end there, however, as the pupils also get to perform the play again for the rest of the school when the term commences.

“The programme contributes to new perceptions of themselves as young citizens capable of fostering a new kind of leadership in their communities and country,” said Houston.

An added incentive for pupils who wish to participate in the programme is the chance to receive a scholarship, given by the ITLP to cover the cost of textbooks and tuition.

In Tanzania, two of ITLP’s participants from St Margaret’s Academy got an opportunity to attend the Camp Treetops, a residential camp in New York as part of the ITLP-Nowicki scholarship, funded by film producer Stefan Nowicki.

“Theatre is a very good method for communicating information [in] an oral history society,” said Houston. “The act of coming together at a performance reconnects communities with cultural roots.”