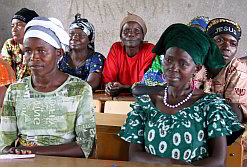 For a long time, Merthus Ntahobakuriye did not think much of being drunk daily or refusing to help out with household chores. He sold the little his family had to maintain his drinking habit.

“Whenever my wife went to work in the field, she would come back to find that I had sold everything I could lay my hands on. One day she got a goat from her family; I couldn’t resist selling even this one,” the 53-year-old Ntahobakuriye told a meeting of women leaders in the commune of Mutimbuzi, Bujumbura-Rurale Province, which surrounds the Burundian capital, Bujumbura.

Ntahobakuriye is one of dozens of men known in Kirundi as Abatangamuco (“those who bring light where there is darkness”).

They are identified by the community and, with the help of international NGO Care, help empower women by raising men’s awareness of gender-based violence and other practices which denigrate women.

Michelle Carter, head of Care Burundi, told Irin: “One of our biggest successes in Burundi has been the Abatangamuco – these men are revolutionaries, going against tradition and supporting women. It starts off with stopping the beating at home, and now some of these women are in political office. The challenge is the country needs more Abantagamuco and empowered women.”

The Abatangamuco programme, according to Nicedore Nkurunziza of Care Burundi, was established two years ago to empower women by getting reformed men to testify before the community, and in the process get more men to emulate their changed behaviour.

“This approach is interesting because it gets men to know that they can change their ways,” she said. “Even the government has found this approach useful and sometimes calls on the Abatangamuco to testify on social issues such as marriage and what it entails.”

A turn for the better

For Ntahobakuriye, life took a turn for the better when he heard one of these reformed men, from another commune, tell his story.

“It was as if he was recounting my life. As a consequence of my actions, my wife was depressed and suicidal, my children didn’t go to school as I could not raise school fees and I realised I was starting to be adulterous,” Ntahobakuriye said.

“Moreover, as I had not legalised my marriage, my wife became very insecure. Then Care came to our village and a Mutangamuco started sensitising us. From then on, I started changing; the drinking decreased and I started helping my wife with chores.

“As I had sold everything, we were sleeping on the floor, but this changed soon thereafter. We started raising goats and soon enough we built a new house, as the one we were living in was leaking badly. I got the children enrolled in school. Eventually, I became a Mutangamuco after the community verified that I had, indeed, reformed.”

Thousands of women from 290 solidarity groups have benefited from Care’s Abatangamuco programme – as well as another on leadership, known as the Women Empowerment Programme, which helped get hundreds of women elected in local elections held country-wide in the middle of the year.

Of the 35 000 candidates who presented their credentials for local elections in Bujumbura-Rurale Province in May, 8 000 were women, according to Care. The organisation contributed to the implementation of a national strategy to mobilise women to participate in the electoral process in accordance with Burundi’s constitution, which provides for 30% of seats going to women.

Odette Ntirampeba, who was elected in Kinyinya Hill, Rukarama Zone, said the empowerment programme enabled many women to get elected because they were trained in uniting for a common cause.

“We learnt, through training, that women can elect other women; we know that women often number more than men and they are the ones who turn out to vote, so why were we letting men defeat us?” Ntirampeba said.

“At our hill, we had five women contestants against 20 men; the men had money and we didn’t, but thanks to Care’s programme most of the women got elected because women voters were united behind them.”