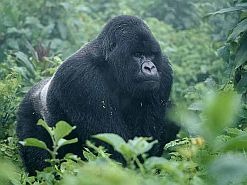 Africa’s critically endangered gorillas are to receive a welcome conservation boost with the announcement by the United Nations and the World Association of Zoos and Aquariums (Waza) that 2009 is the Year of the Gorilla.

Waza is partnering with the Unesco Great Ape Survival Partnership (Grasp) and the United Nations environmental programme’s Convention of Migratory Species (CMS) to address both the needs of the world’s largest primates, and the people who live in regions where they occur.

The event was officially launched in December 2008 at the annual CMS conference in Rome, with renowned British primatologist and conservationist Dr Jane Goodall as its official patron.

The CMS is a convention dedicated to the conservation of endangered migratory animals around the world. There are currently 110 member countries, many of them from the African continent.

The Grasp project, of which CMS is a member, is tasked with stopping the decline in great ape populations. It comprises a number of foundations, corporate sponsors, governments, NGOs and United Nations agencies.

Zoos and aquariums from many countries are members of the Waza, the umbrella organisation for such institutions, as well as regional and national associations of zoos and aquariums, and veterinarians and educators working in zoos. More than 100 zoos are participating in the year-long gorilla awareness programme.

A number of important activities have been planned for the Year of the Gorilla, focusing mostly on reducing the human impact of gorilla habitats while boosting quality of life of people through education and heightened awareness. These include:

Gorillas are in danger primarily from the bushmeat trade and traditional medicine needs, habitat destruction, and the effects of war. They are also particularly vulnerable to human infectious diseases such as Ebola, which can ravage entire populations and has claimed the lives of up to 5 000 individuals to date according to a 2006 study published in the US journal Science.

During the Year of the Gorilla, and beyond, research work will also be carried out as well as ranger training and funding. The campaign’s website will present supporters with the chance to get involved in various ways, such as donating towards a conservation project, or purchasing a gorilla toy or art print.

“If we can get these kinds of programmes going,” said Goodall at the launch of the event, “and it is so important to create partnerships with local people so that they become involved and care about the future and the forest, then these initiatives benefit more than the great apes.

“They help prevent the spread of contagious disease. They reduce poverty and protect forests. And they help slow global climate change. Finally, in areas where there is competition for diminishing natural resources with potential for violence, programs of this kind add to the security of the region.”

Gorillas occur only in the tropical and subtropical forests of Africa. The world’s largest primate belongs to the genus Gorilla, which encompasses two species, and while there is not unanimous consensus on the number of subspecies, it is generally agreed that gorillas can be classified into either four or five subspecies.

The proposed third subspecies of G. beringei has not yet received an official trinominal, or subspecies, name. This is the Bwindi gorilla, found only in the rain forests of Uganda’s Bwindi Impenetrable Forest. It comprises about half the entire population of Mountain gorillas.

After the two species of chimpanzee, gorillas are our closest living relatives with a genetic makeup that is between 98% and 99% identical to humans. Gorillas, chimpanzees and humans are classified under the same family – Hominidae.

Gorillas are herbivores, favouring bamboo, thistles and wild celery. They live in a diverse range of habitats. The Mountain gorilla can live at elevations up to 4 200m above sea level, while the Lowland gorilla lives in forests and swamps as low as sea level. They travel by walking on their knuckles.

The magnificent male gorillas, which grow up to 1.8m in height and weigh 180kg or more, with an arm span of 2.4m, are known as silverbacks because of the silvery coating of hair that develops on their backs at maturity.

Three of the four gorilla subspecies are listed as critically endangered on the Red List of the International Union for the Conservation of Nature.

Gorillas are listed on Appendix I of the Convention on International Trade in Endangered Species. Appendix 1 covers species that are threatened with extinction and are or may be affected by trade. Trade in wild specimens is illegal while trade in captivity-bred specimens falls under Appendix II, which lays out and enforces strict regulations.

However, the Gorilla Agreement, the first legally binding instrument that targets gorilla conservation exclusively, is set to change the animal’s fragile status. Drawn up by the CMS, the agreement will reinforce and consolidate gorilla conservation efforts and allow governments and organisations to work together across borders.

The agreement came into effect in June 2008 and so far has been signed by six out of the 10 gorilla range states – the Central African Republic, the Republic of Congo, the Democratic Republic of Congo, Equatorial Guinea, Nigeria and Uganda. The outstanding four are Rwanda, Cameroon, Gabon and Angola.

The Year of the Gorilla campaign will strive for the full implementation of this agreement in the remaining four countries. While most of the gorilla range states do have anti-poaching laws in place, authorities say that enforcement is often ineffective, and more stringent action is needed.