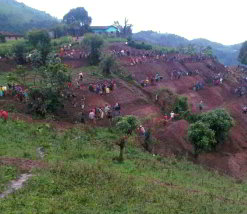 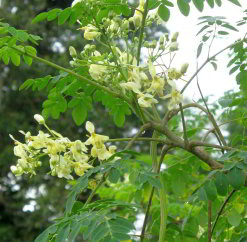 The nutritious leaves, fruits and flowers
of the moringa tree are used in Africa
and Asia to alleviate hunger.
(Image: Wikimedia Commons)

With 60% of the world’s uncultivated arable land located in Africa, the continent has the potential to become the breadbasket of the world, but often lacks the expertise to take advantage of its natural wealth.

The Australian government now wants to help unlock this potential by providing African farming communities with technical and scientific support and expertise through the establishment of a new food security centre.

The Australian International Centre for Food Security (AICFS) will be established early in 2012 and will be based in the Australian capital, Canberra, with a satellite office earmarked for Africa. The location of the African office is still to be announced.

Australian prime minister Julia Gillard made the announcement at a Commonwealth Heads of Government meeting in Perth in October.

The Australian government has pledged more than US37-million (about R298-million) toward the establishment of the centre. It will be led by the Australian Centre for International Agricultural Research (ACIAR).

“Under-investment in agricultural research and innovation, along with a decline in agricultural productivity, are key factors affecting Africa’s ability to bring about food security,” said Gillard.

Australia is a food exporting country and bases much of its success on agricultural research.

According to Gillard, Australia has agricultural and scientific expertise and world-class teaching and research institutions that will benefit African farmers, and enhance food security.

This includes tropical and dry land farming; adaptation to climate change; commercialisation of agricultural research; and water and soil management expertise. The country is a world leader in the production of drought resistant crops.

“The new centre will give farmers, government agencies and the private sector access to this expertise,” said Gillard, “and other support from a large network of Australian, African and international research bodies.”

African scientists will receive training at the facility in the best available methods and technology to cope with growing environmental challenges.

Australia shares many geographical similarities with Africa, such as unpredictable climates, infertile soil, vast distances, and climate change. As a result, the centre will focus first and foremost on Africa, but plans to also extend its expertise and skills to Asian and Pacific nations in time.

The first activity planned for the new centre is to host an international conference on African food security early in 2012. Bringing together Australian and African research partners and international experts, the conference, Food Security in Africa: Bridging Research and Practice, hopes to identify opportunities for future cooperation.

The centre will also aim to establish African agricultural entrepreneurs. Linking to the Research in Business programme of the Alliance for a Green Revolution in Africa – an initiative funded by the Bill and Melinda Gates Foundation – it will help emerging and small farmers to develop their activities into thriving businesses.

A handful of moringa leaves

One in three people go hungry every day in Africa. Social anthropologists have linked food security to social unrest, showing a clear correlation between food scarcity and social upheaval, of which the recent Egyptian social uprising and eventual regime change is cited as a prime example.

Yet, often a simple solution is close at hand.

An ingenious method to counter food scarcity is making headway in the impoverished countryside of South Africa’s Limpopo province.

Here inhabitants are often faced with drought, and suffer from malnutrition as a result of their nutrient-poor diets.

But the Moringa oleifera, known as the miracle tree, is making a change in the lives of residents at Sedikong sa Lerato, a community feeding project at the Tooseng village, about 80km south of Polokwane.

The project was started in 2005 by Mavis Mathabatha, a teacher, mother and local businesswoman. It feeds over 300 orphaned children every day.

In 2009 Mathabatha added the Lammangata Moringa project, a subsidiary project of Sedikong in which moringa trees are cultivated, and the leaves and seeds added to food as it boosts the nutritional value of meals ten-fold.

She was named South Africa’s Female Entrepreneur of the Year for 2010, for her efforts to uplift her community.

The project also produces and sells moringa powder and provides community education in health and nutrition.

According to Sedikong sa Lerato, moringa leaves possess more vitamin C than oranges, more vitamin A than carrots, more potassium than bananas, more iron than spinach, and more protein than milk. The tree is easily cultivated in semi-arid climates, grows quickly, and is not invasive. It is safe for human consumption.

Moringa oleifera is indigenous to northern India but has adapted to southern Africa. Moringa leaves are used in countries all over Africa to stem malnutrition and hunger, especially among infants and nursing mothers. In South Africa the practise is still relatively scarce.