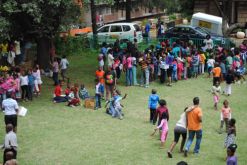 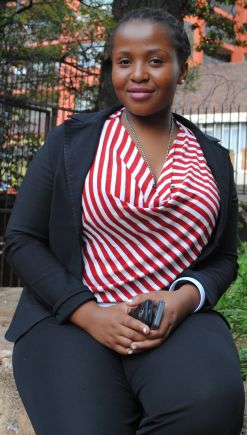 Buhle Mgubasi, who stays at a building located a stone’s throw from the Lutheran Church, has been attending Hillbrow Kids Week for the past 11 years.
(Images: Ray Maota)

Youngsters in the Johannesburg inner city suburb of Hillbrow have a safe haven where they can play and be nurtured in a religious environment during school holidays.

The first week of each public school holidays is a time when children from the bustling suburb converge on Friedenskirche Lutheran Church to play educational and fun games during Hillbrow Kids Week.

The initiative is the brainchild of the Outreach Foundation and was recently held at the church from 10 – 15 December. The theme for the week was “I am who I am”, a way to instil the value of individualism in the youngsters. About 60 volunteers were on hand to make the programme a success.

Located between Twist and Edith Cavell streets, The Friedenskirche Lutheran Church, or the “Church of Peace”, has been around since 1912 and was declared a national monument in 1986.

Kids Week in a nutshell

Khumo Mohube, the main coordinator of Kids Week, said the programme was started in 1999 with only 10 youngsters. However, the number has grown to about 280 – 300.

“Hillbrow Kids Week was started to keep kids off the harsh streets of Hillbrow and with this being a religious programme, instilling values is a core theme.”

Mohube added that the youngsters play educational and fun games, while also trying their skills in handcraft, fashion and choral singing. “It has become a culture for people living here to bring their kids and it’s spreading through word of mouth,” said Mohube.

The week has always been free for youngsters but this year – due to lack of funding – the organisers decided to charge R20 (US$2) for the whole week.

“We will probably be canning it [the charge] next year as only 10 kids out of nearly 300 paid. We also have a policy of not turning back kids so I think the price will be canned,” said Mohube.

Mohube added that they are planning to open an after-school programme, if and when they get funding.

A Hillbrow resident, Mohube got involved with Hillbrow Kids Week whilst attending services at the Lutheran Church.

“I have love for this type of community work that’s why I wanted to become a social worker or a psychologist,” said Mohube.

Mohube wishes to continue with his studies, but hasn’t been able to fulfil his ambitions because of lack of funds. The work he does at the church does not pay much and he said only his passion for the work he does with children keeps him going.

“For me to be involved in initiatives such as Hillbrow Kids Week which tells these youngsters that there are options in life, patience is a virtue, and that they can make it despite living in an environment such as Hillbrow, is very fulfilling,” said Mohube.

Growing up at Kids Week

Buhle Mgubasi, who stays at a building located a stone’s throw from the Lutheran Church, has been attending Hillbrow Kids Week for the past 11 years. She said she started attending Kids Week since she was only six years old.

“I basically grew up here and for me to be able to now be a leader and make sure the kids coming here enjoy themselves as much as I did, is a privilege,” said Mgubasi.

Mgubasi, who will be doing matric next year, said she would like to be in the hospitality industry and own a camp site that will host events such as Kids Week. She said the Kids Week activities have positive effect on the lives of youngsters.

“When I went to Kids Week as a youngster it was exciting and now as a leader I have to make sure that they have the same experience if not better,” she said.