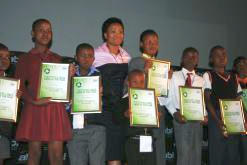 Tshidi Ramogase, the corporate affairs director at ABI, with some of the honoured recycling heroes from the 10 finalist schools. 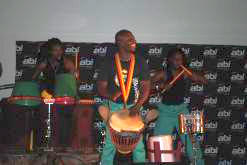 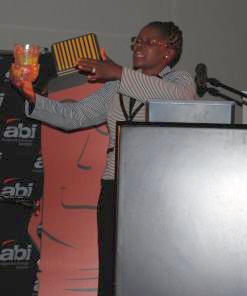 Regina Rathete, a teacher at Boikgantsho Primary School, was named the most motivational and driven programme facilitator, and won an iPad.
(Images: Ray Maota)

Winning pupils and schools were rewarded for their contribution to preserving Earth for future generations by involving not only themselves but also their communities in a recycling drive.

It was led by Amalgamated Beverage Industries (ABI), the soft drink division of South African Breweries, supported by the PET Recycling Company (Petco), which ran a recycling competition for primary schools. The winning schools were announced at a ceremony held at Montecasino in Fourways, Johannesburg on 5 December.

PET, the acronym for polyethylene terephthalate, is a by-product of the oil refinement process. It is a thermoplastic polymer resin of the polyester family and is used in synthetic fibres – and is used to make beverage, food and other liquid containers.

The school recycling competition was established to teach pupils, teachers, parents and the whole community about the importance of waste collection and recycling for a sustainable future.

ABI’s managing director, John Ustas, said: “This competition was a trial to see how well we could execute it but I do know that we will definitely be having it again … As a company that operates in many communities this was one way of giving back, but by educationally involving the little ones who will benefit from us sustaining Earth.”

Gaopaleloe Mothoagae, the group’s sustainable development manager, congratulated the winners “for an outstanding effort in greening their schools”, and commended the teachers who had supported this “learning opportunity to enhance the educational experiences for the students”.

The awards event was held in one of Montecasino’s cinemas. Mbali Vilakazi, a poet, performed, as did the drumming group, The Silverbacks. Vilakazi said: “When I got the brief for this event I was excited because young people and sustainability are very close to my heart.”

She recited a poem titled “Is there a Xhosa word for climate change?”

Tshidi Ramogase, the corporate affairs director at ABI, said: “At ABI we have a sustainability programme that recognises how our products can be better for the environment … Challenges of unemployment in the country also drive such projects, so we can show people that garbage to others can be money to them.”

The competition was open to primary school pupils and schools in Gauteng and KwaZulu-Natal. Mothoagae said: “The focus was on primary schoolchildren; in order to change the behaviour patterns of our country we need to change the mind-set of a generation.”

Initially 120 schools took part in the four-month competition and 67 tons of waste was collected and recycled. The top 10 schools were named at the event, and included: Ndima, Motheo, Mdongeni, Refentse, Bopanang, Badelile, Lourdes, FF Rebeiro, and Boikgantsho primary schools.

Boikgantsho Primary School from Mamelodi in Pretoria, the winners of the competition, walked away with R50 000 (US$5 720); and the first and second runners up, FF Rebeiro also from Mamelodi and Lourdes from Diepkloof in Soweto, received R25 000 ($2 860) and R10 000 ($1 144), respectively for infrastructural development for their schools.

“At ABI we pride ourselves in developing the communities in which we operate. We recognise that the success of our business is intrinsically linked to that of the communities we operate in,” said Mothoagae. She added that this was a perfect example of one simple action by young people having a bigger impact. It was something from which we could all learn and a great achievement towards caring for the environment in which we lived, worked and played.

The recycling heroes – 10 pupils from each of the 10 finalist schools – each received school fees for the year, school uniforms, stationery and school bags. Regina Rathete, a teacher at Boikgantsho Primary School, was named the most motivational and driven programme facilitator, and won an iPad.

Rathete said: “We not only made this a pupils’ initiative, but involved the whole community.”