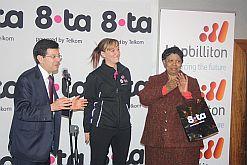 Martin Sweet, Primestars MD; Adele La Grange, head of sponsorships and CSI at 8ta; and, Minister of Basic Education, Angie Motshekga, at the launch of the 2012 revision programme. 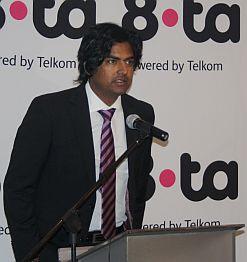 Amith Maharaj, senior managing executive at 8ta, said that Maths and Science education is the foundation for many of the jobs needed to develop the country’s infrastructure and therefore our economy’s growth.
(Images: Ray Maota)

RELATED ARTICLES
• Education at the movies
• Grooming future leaders: priceless
• Young people: own your destiny!
• All aboard the Youth Express

Zanele Khumalo (18) of Meadowlands in Soweto is to start studying medicine in Cuba in 2013, thanks to the help and support of the EduC8 maths and science revision programme. Khumalo completed her grade 12 at Letsibogo Girls High School.

She spent her weekends at the township’s trendy Maponya Mall, not to hang out with her peers, but as part of the one-year-old programme that aims to boost the performance of science and maths pupils at disadvantaged schools across the country.

The vision of Educ8

EduC8 was started in July 2011 and has the backing of corporate partners like mobile operator 8ta; BHP Billiton; Primestars and Samsung. The national Department of Education is also involved, and at the launch of this year’s campaign in Sandton on 12 July, basic education minister Angie Motshekga urged more corporates to join in the efforts to encourage better results in the two subjects.

“Poor maths and science results stunt our growth in medical and engineering fields,” she said. “Without the help of civil society the poor African child would be in trouble as government can only do so much.”

She added that despite her department’s challenges, it is still committed to providing the quality of education promised to a democratic South Africa.

Improved results in grade 12 maths and science are central to the objectives of EduC8. The two subjects were singled out as the top priority of a departmental initiative titled Action plan 2014: towards the realisation of schooling 2025, which aims to grow the number of pupils who pass them in grade 12.

Motshekga’s department publishes an annual list of under-achieving public schools, and it is from this list that the participating schools of the EduC8 programme are chosen each year.

Each revision session is filmed at a Ster-Kinekor movie theatre and simultaneously broadcast to a network of 15 other theatres across the country, and this year will run every Sunday from 22 July to 23 September 2012.

Pupils will interact with subject experts who will be available at each session to assist with questions and answers.

This year, EduC8 will reach three additional areas – Witbank in Mpumalanga; Richards Bay in KwaZulu-Natal; and Kuruman in the Northern Cape – as part of its commitment to being as widely accessible as possible, and giving equal opportunities to all disadvantaged pupils.

Pupils who are unable to attend sessions because of distance will be able to access information shared at these sessions online http://edusynergy.co.za/index.php?option=com_content&.

An incentive for participating pupils is a bursary package that will be given to five qualifying recipients, courtesy of the Sasol Inzalo Foundation (SaIF) and Studietrust. The main criteria for selection are academic potential and financial need.

Each EduC8 workbook made available to participants during the programme contains a SaIF Bursary Programme application form. The closing date for 2013 applications is 30 September 2012.

“One of our goals is to develop at least 10 000 electronic engineers across Africa by 2015, and a strong maths and science foundation is critical for this,” he said.

Martin Sweet, MD of Primestars, said: “Past interaction with pupils at these sessions has indicated that they find this learning environment very stimulating and as a result, concentration and message retention are improved.”

A shortage of professionals

According to the Global Competitiveness Report for 2011 and 2012, South Africa currently ranks at 138 out of 142 countries in terms of academic performance in maths and science.

It is not surprising that the country has an acute shortage of professionals in maths and science-related fields such as actuarial science, engineering, medicine, and accounting.

By helping pupils perform better in these subjects, initiatives like EduC8 give them a better chance of gaining admission to tertiary institutions, and improve the numbers who enrol in the subjects.

“We all acknowledge that maths and science education is the foundation for many of the jobs needed to develop the country’s infrastructure and therefore our economy’s growth,” said Amith Maharaj, senior managing executive at 8ta.

“Increasingly these subjects are a critical component of getting ahead and 8ta is proud to be part of this an initiative which sees government and the private sector working closely towards a common goal.”

“The best way of developing the country is to start at grassroots level with skills development and education,” said BHP Billiton chairman Dr Xolani Mkhwanazi.

If Khumalo’s near future is anything to go by, EduC8 is on the right track.

“The programme helped me obtain the marks that I needed to be able to qualify for a scholarship and realise my dream of becoming a medical doctor,” she said.

According to Sweet, seven of the programme’s past participants are enrolled in the first year of a variety of engineering courses at universities across the country.

“It is therefore not surprising that participating schools from last year have again requested to be included this year.”