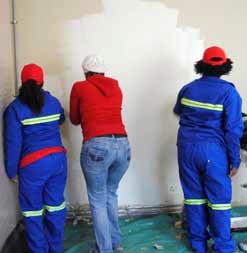 The first coat of paint goes on the walls of the children’s room. 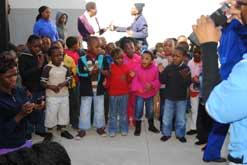 Pupils from Sunrise pre-school in nearby Hillbrow start off their day singing happy birthday to Nelson Mandela, before getting into their task of making message cards for him. 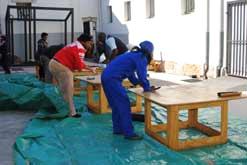 Old furniture is sandpapered and vanished to make it look like new again. 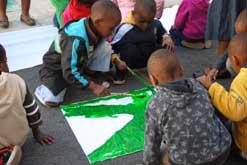 All children born in South Africa after 1994 have in common the privilege of only knowing a democratic government system underpinned by a Constitution that has been hailed as the world’s most progressive.

Many of them know of the Bill of Rights, a major part of the Constitution, and how it protects the country’s citizens. The responsibility that goes with instilling these rights remains a tricky aspect, and this is what Constitution Hill wants to change.

The Constitution Hill precinct is one of South Africa’s national heritage sites and is managed by Blue IQ Investment Holdings and the Johannesburg Development Agency. It is home to the country’s highest court on constitutional matters, the Constitutional Court.

One the site are the museums that were once prison operations, namely the Women’s Gaol museum, the Number Four museum and the Old Fort museum.

Hoping to capitalise on its location in the inner city of Johannesburg, Constitution Hill staff are ready to make a difference to disadvantaged young people. They are availing themselves to children in the area for what CEO Petal Thring describes as a programme focused on imparting the values of the Constitution.

“Children today generally know what their rights are in terms of the Constitution, but they don’t necessarily know how the country achieved those rights and what sacrifices were made in order to gain them,” says Thring.

Pre-school children are the main target, because they are at an age where they are only learning to read and write.

On Wednesday 18 July, Constitution Hill staff mobilised volunteers from several of their associates, suppliers and tenants to help refurbish the children’s room in the Old Fort Prison section of the facility.

The room was first converted in 2004, and had previously served as one of the prison’s mess halls.

A group of some 40 people spent the morning of Mandela Day clearing the room of old toys, books and furniture and repainting the walls. They also organised old and newly-donated toys for children who will be using the facility in the future.

Instead of acquiring sponsorship to fund the renovations, Thring’s team kept in line with their culture of preserving as much of the precinct’s history and heritage as possible, electing rather to use the same furniture and other supplies.

“I didn’t expect such a good turnout,” she said, excited. “It is such a lovely day and the weather is on our side.”

By mid-morning the site was a hive of activity, the spirit was high and as people arrived with more books and toys to donate, extra storage space had to be organised on the spot. While one group painted the inside walls, others worked with sandpaper on the wooden desks that make up most of the furniture, before varnishing them.

It was only after the arrival of about 35 pre-schoolers from the Sunrise pre-school in nearby Hillbrow, however, that the old courtyard of the prison got busier and noisier with singing and laughter. As soon as the youngsters had been briefed on their big task of the day – writing birthday messages for Mandela – excitement set in and they dived into the challenge, rolled-up sleeves and all.

“Can you imagine what it would mean for this country if their generation respected the meaning of the Constitution?” Thring expresses, watching the children in action.

The primary mandate of Constitution Hill has always been inner city renewal, says Thring. When the children’s room was first established, its main purpose was to provide space for pupils across different ages and grades where they could study, read and do school projects.

But its meaning goes further than that, she maintains.

“Many of the families that live in this area are poor, and they do not have exposure to many vital sources of information. The children will benefit from all sorts of activities like workshops for which we hope to get sufficient facilitators.”

For a lot of people in the inner city, who stay mainly in apartment buildings, space and privacy are a challenge. With the help of such a facility pupils could get together and help develop each other without worrying about either obstacle.

Because of challenges such as budget cuts – which were introduced to several government projects in the past few years– the room had to be closed down in favour of continuing with the other operations such as tours and exhibitions. Constitutional Hill also hires out the venue for special events as part of its business.

“When we think about how we create a new culture within our society we need to think about our children,” says Thring.

While preparing for a recent appearance as guest speaker at a Jewish congregation, where she was to speak about the Constitution, it occurred to Thring that society nourishes and protects religion in a broad sense – it becomes a way of life, a place to belong. She started to think of how she could use her position to help communities to start incorporating the Constitution into their every culture as they do the different belief systems.

“For far too long we’ve worried about rights, but we now need to think of our responsibilities in terms of protecting those rights.”

Even a lack of funding – only about a third of their funding comes from government – has not deterred Thring and her staff. They decided to use Mandela Day as a spring board to mobilise a publicity campaign as well.

For the long term, she says, her team is developing partnerships with several stakeholders for a structured programme, but for now will start with simple activities like reading and helping children with their homework.

“Even in reading, we have to identify the right books,” she says. “We’re looking for partners that will help us teach and develop different language skills in young children, because we need to get them to read in different languages.”

Starting with basic values like honesty and friendliness, she says, will go a long way in developing this culture of oneness that South Africans seek.

While awaiting the famous Rivonia treason trial after his arrest in 1962, Mandela spent time in the Old Fort prison. He was, during this time, the only black prisoner among all-white inmates, and more than one explanation has been offered for this over the years.

While one theory claims that it was believed by authorities that Mandela could find the means to escape from any other facility, another says the strategy was to keep him as far from the rest of his fellow African National Congress leaders as possible as he was an influential man and could change the government’s course of action in terms of the judicial system.

Today the Old Fort grounds are home to a permanent exhibition of the Mandela cell. The exhibition, called Nelson Mandela: Prisoner in a Garden, has been on the site since 2005 and includes his communication with the outside world.