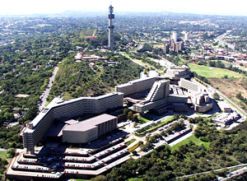 Unisa – the University of South Africa – has seven graduates in the Constitutional Court, six current and former presidents of the High Courts and heads of special courts, and a significant number on the boards of JSE listed companies.

The university celebrates its 140th birthday this year, and can proudly notch up an illustrious list of alumni – with Nobel Peace Prize laureates Nelson Mandela and Archbishop Emeritus Desmond Tutu leading them, as well as Judge Dikgang Moseneke, deputy chief judge of the Constitutional Court; the late Professor Kader Asmal, one of the country’s most respected cabinet ministers; Ahmed Kathrada, former Robben Island prisoner and human rights activist; singer and humanitarian Yvonne Chaka Chaka; and Transnet chief executive Brian Molefe, among others.

The theme for the anniversary is “140 years of shaping futures to highlight how the university has helped ordinary South Africans achieve their dreams of obtaining quality education”.

Significantly, it has always been a non-racial institution, providing a means of study for thousands of South Africans who would have struggled otherwise to get tertiary education.

“Unisa students are typically people who in their studies have succeeded against many odds, improved their place in society, enhanced their chances of success in securing employment if they were not already holding down jobs, continued their career development if they were already employed, and pursued a process of lifelong learning,” says Nancy-Anne Anderson, the managing editor in the department of corporate communication and marketing at Unisa, which is based in Tshwane, South Africa’s executive capital city.

Vice-chancellor Mandla Makhanya believes Unisa sets itself apart. “In a country of opposites, disparity and diversity, Unisa has perhaps been the single constant. Unisa and those who have worked for her have served South Africa and its people as well as our continent, irrespective of their circumstance, faithfully for 140 years. I can think of no other institution that can make that claim.”

Of his studies at Unisa, Moseneke says: “Two numbers [his Robben Island prison number and Unisa student number] were vital for my continued survival and yet they served divergent and often paradoxical ends. The one was the ultimate symbol of deprivation of liberty, repression and human futility. In sharp contrast, the student number served as an icon of goodness. It represented a fountain of knowledge that was life-giving and liberating.” He spent 10 years on Robben Island as a political prisoner of the apartheid government.

His feelings are echoed by Kathrada: “Unisa and I both have a strong belief in opening doors, especially to people who have been disadvantaged in the past. Other universities have had a limited access in terms of what they can offer. Unisa has made a big difference in this in that it appeals to students not only of South Africa, but also to those outside the country.”

Unisa was founded in 1873 in Cape Town as the University of Good Hope, and operated as an examining body for the Oxford and Cambridge universities, receiving its Royal Charter in 1877. In 1916, it changed its name to the University of South Africa, and in 1946 it became the first public university in the world to teach exclusively through distance education, using study guides, cassette tapes and limited face-to-face tuition. In 1918, it moved to Pretoria, and in 1972 it moved to its present campus on Muckleneuk ridge.

Ten years into democracy, in 2004, it merged with another distance learning institution, Technikon Southern Africa, and also incorporated the former Vista University’s Distance Education Campus to become the largest university in South Africa and Africa, making it one of the world’s mega universities. It has seven regional offices, including one in Ethiopia, and 28 learning centres countrywide.

It offers a range of study choices, from short courses and certificate programmes to three- and four-year degrees and diplomas, and doctorates, in the humanities, business and management, law and criminal justice, agriculture and environmental sciences, and science, engineering and technology.

Unisa’s mission is to be a “comprehensive, open distance learning institution that produces excellent scholarship and research, provides quality tuition and fosters active community engagement”. It is guided by the principles of “life-long learning, student centeredness, innovation and creativity”, and hopes to “contribute to the knowledge and information society, advance development, nurture a critical citizenry and ensure global sustainability”.

In 2005, Unisa launched an integrated learning management platform called My Unisa, an open distance learning initiative. It introduced its first signature courses, fully online modules to ease learning, in 2013. Other initiatives include the Thabo Mbeki African Leadership Institute, which is dedicated to investing in new thought leaders for Africa’s renewal. It is supported by the Brigalia Bam/Wiphold Chair in Electoral Democracy in Africa, which facilitates the training of electoral officers and commissioners from selected countries in Africa in democratic election procedures.

In addition, in 2013 the Thabo Mbeki Foundation at the university hosted some of Africa’s intellectuals at the Thabo Mbeki@70 Colloquium, which discussed 50 years of the Organisation of African Unity, and key concepts for Africa’s future. “Unisa is an African university and its identity informs its core business areas of teaching and learning, research and innovation, and community engagement. For example, in its curriculum policy, Unisa undertakes ‘to promote African thought, philosophies, interests and epistemologies through inquiry, scholarship and partnership,’” explains Anderson.

Regarding community engagement, it has 157 projects that are “aligned with the socio-economic imperatives of the country and continent”. One such initiative is the Bright Site Project, set up in 2009 by the department of social work. A project of “mutual service” in the Pretoria suburb of Sunnyside, here students are encouraged to serve the community. Other departments are also involved in the project, through community-based research and applied research responses.

As part of its 140th celebration, in July this year Unisa hosted the world premiere of Credo: a Musical Testament to the Freedom Charter, a multimedia oratorio to honour Mandela and other struggle veterans.

Also this year, in July, Unisa launched its Science Campus in Johannesburg. A green campus, it is built on energy-efficient design principles with a focus on sustainability. “It is an environment that meets the educational and training needs of its distance learning science students, something not usually associated with open distance and elearning institutions,” says Anderson.

High-end equipment and facilities give researchers and students in molecular biology, engineering, physics and chemistry the chance to match theory and practice. And the Horticulture Centre, which was opened recently, gives students the opportunity to undertake a range of programmes including agriculture, ornamental horticulture and nature conservation.

Unisa has a healthy and growing community of researchers comprising more than 10 000 master’s and doctoral students, and 1 850 academic staff, which includes close on 130 researchers with National Research Foundation ratings, including a significant number of young academics and two A-rated researchers.

Unisa has identified research priority areas that involve all colleges of the university community:

Makhanya is concerned that future goals are important to Unisa. “It is Unisa’s performance as a graduator of quality graduates that will ensure its continued excellent reputation. Let us not falter in ensuring that we build on the wonderful legacy that has been left to us. Let us make our contributions to shaping futures.”