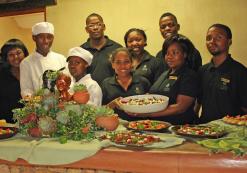 The hospitality and ecotourism sectors
have gained 142 skilled Umzi Wethu
graduates since 2006. 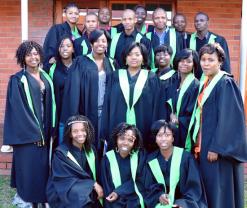 A unique Eastern Cape social intervention programme aimed at young people affected in one way or another by the HIV/Aids pandemic is using the hospitality and ecotourism industries as a springboard for skills development and employment opportunities.

The Umzi Wethu (isiXhosa, meaning “our homestead”) Training Academy for Vulnerable Youth programme gives promising youngsters, who have no access to training and jobs because of their circumstances, a chance to gain hands-on experience, with the eventual aim of finding employment or becoming self-employed.

Since 2006, when the project was formally launched, 142 young people have graduated from the hospitality academy in Port Elizabeth and conservation academy in Somerset East, some 165km away.

The project’s success in placing its graduates is impressive, with 85% of students finding permanent employment.

Among these are Simphiwe Mantile, now a junior sous chef at the prestigious Shamwari Private Game Reserve and Simphiwe Ngubane, who is employed as a marine field ranger at Addo Elephant National Park.

“The ultimate goal of Umzi Wethu is to have a seamless transition from being a student to being employed,” says Pinky Kondlo, director of the project office.

Kondlo says she still gets a thrill from seeing once shy and uncertain students developing into confident employees guiding tourists and talking knowledgeably about a variety of subjects.

“I can see they have a sense of purpose now. Those moments are breathtaking.”

The Umzi Wethu programme is an initiative of the Wilderness Foundation.

In 2008 it received international recognition when the foundation’s executive director and the creator of the programme, Andrew Muir, won a prestigious Rolex Award for Enterprise. The Rolex awards recognise individual efforts that have had a profound effect on people or the environment, and Muir is one of only a handful of South Africans to have received the accolade.

According to its website, “Umzi Wethu has two parallel ambitions: to close the skills gap that exists within Southern Africa and to provide hope and employment to some of the region’s most vulnerable people.”

Every year about 20 students are selected from groups of contenders identified by Umzi Wethu’s partners, among them the Ubuntu Education Fund and the loveLife Campaign.

“The selection process is rigorous and stringent,” says Kondlo. “We are not big on numbers and would rather focus on quality.”

The emphasis of the programme is on skills, with academic learning just one part of the overall approach. Students live in residences at the academies, are supervised by a housemother and are given three meals a day.

For some of these students, most of whom come from an extremely poor and difficult environment, the programme and residence life literally become home, says Kondlo.

Like Pride and Imbewu, two more of the foundation’s social programmes, Umzi Wethu’s emphasis is on the environment.

The programme’s pay-off line is nature, nurture, future, and before any actual learning takes place students are taken on a wilderness trail to experience nature at first hand. For most of the students this is their first encounter with the natural environment.

“Wow, the programme has changed my life inside out.” These are the frank words of 24-year-old Lwazi Xinwa. His deep voice exudes confidence as he speaks of his newfound belief in himself and his future.

Xinwa is now employed at the Umzi Wethu Hospitality Academy where he wears many hats, but there was a time in his life when things looked bleak.

Abandoned at birth, he spent his first years in an orphanage and was then adopted, but had to deal with a few more blows when he lost his adopted father and, just before graduation, his mother. There was a point, after matric, when he even considered becoming a gangster, he says.

Xinwa says that going back to “school” was not part of his plans when he first entered the hospitality academy in Port Elizabeth for a year-long course. Completely new to both conservation and hospitality, he joined the programme because he was desperate for a job, not knowing that it would involve much more than just employment.

He admits that for the first six months he only stuck it out for his mother’s sake, but it wasn’t long before his interest in and passion for cooking began to grow.

“I also began to understand how we are all so connected with nature.”

While he became quite accomplished in the kitchen and in the managerial aspects of the trade, it is his passion for social work that is now coming to the fore, as he often stands in as housefather, lending his emphatic ear to new students.

The Umzi Wethu programme itself has gone through a natural and spontaneous growth process since its inception. After feeling the squeeze of the economic recession the hospitality programme was extended, and now has a thriving catering division which forms part of the hospitality students’ hands-on training.

Students also work in the coffee shop on site, a joint venture between Umzi Wethu and the Eastern Province Child and Youth Care Centre.

In 2011 the Wilderness Foundation came up with a new initiative which complements the existing programme and, in time, will be used as to broaden opportunities for job creation for its graduates.

The first of what is likely to be a growing brand of small, niche coffee shops linked to heritage, cultural, and green urban spaces opened on Heritage Day, 24 September 2011, in the Donkin Reserve in Port Elizabeth.

The pilot coffee shop project is a partnership with the Nelson Mandela Bay Development Agency and Port Elizabeth Tourism.

It is hoped that similar coffee shops will be rolled out as franchises around the country, with Umzi Wethu graduates as the registered owners. The branding of the coffee shop model is still under development.

The coffee shop project in the Donkin is entirely run by Umzi graduates and gives them that real-life exposure, says Jean Rigby, coordinator for Umzi Wethu in the project. Students are gaining in confidence daily, she says, remembering a time when the coffee shop kitchen had only a fridge and a microwave.

“They saw how we had to start small and make progress gradually. It has taught them a lot about basic business principles and good work ethics.”

The Donkin Coffee Shop offers a full catering service, with head chef Sonwabile Tobi “really coming into his own”, says Rigby. All packaging for takeaways is fully recyclable and in time the shop will add organic options to its menu.

“Ultimately, we want to see an Umzi Wethu graduate owning his or her own business,” concludes Kondlo.