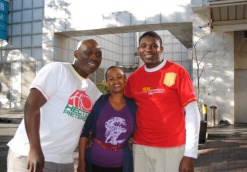 Three young people from Soweto in the south of Johannesburg have begun an enterprising journey to uplift and inspire the young people of South Africa, in memory of late student activist Hector Pieterson.

Sina Molefi, a half-sister to Pieterson, together with Zuza Mbatha and Tera Gaju, call themselves “activists of Hector Pieterson”, and say they are not out to exploit his name for money, but to use it to make a creative impact on the youth of South Africa whilst creating a legacy for his family.

The three started a fashion label in 2007 – which they named after Pieterson – under Abasha Innovations – a closed corporation company they run jointly. They used the brand to commemorate not only the now world-famous teenager, but also all the other victims of the fateful day of 16 June, 1976 – the beginning of the Soweto uprising.

Abasha is an isiZulu word that means ‘young people’.

Since its establishment, the aim of the brand has been to preserve the valuable contribution of the youth of South Africa through fashion.

Some of the items currently available include accessories like caps and handbags, while they also have ranges in T-shirts, skirts, dresses and suits.

The trio’s clothes were initially sold at independent retail stores like the Y Shop in Rosebank and Cyberzone at the Carlton Centre in the Johannesburg city centre, but the team decided to expand and make it available through other channels.

And so with their collective vision they began with plans to open a clothing store, which they hope will take his legacy to new heights.

The store, expected to open in August, will be located outside the Hector Pieterson Museum in Orlando West. Their immediate plan is a modest one that involves operating the business out of a shipping container to start with, with the hope of venturing into a larger, more conducive space in future.

One of the most immediate challenges for the team is securing sponsors for the store. Another idea they had was to get an advertiser to use the container space for exposure of their brand, which would in turn help them finance the day-to-day running of the store.  But even that is proving to be a struggle.

Once the store is up and running, the items sold will be directly available to their target market, young people in Soweto as well as to visitors to the memorial site.

The fashion identity of the “Hector Pieterson” label is a combination of South African township trends and urban styles, and was started with the hope that it will mean something to young people.

“If young people and maybe even adults are wearing the clothes, they will help keep the memory alive,” says Mbatha. He hopes the story of 1976 is alive every day and inspiring change in the youth.

Molefi, who is the creative director for the label, is responsible for the designs. She studied fashion design at Parktown College. Mbatha, who has also worked with well-known fashion label Loxion Kulca, manages the operations of Abasha, while the sales and marketing responsibilities of the label lie with Gaju.

The team at Abasha have not left their plans to inspire change entirely up to the success of the store. The company has also signed a binding agreement with the Hector Pieterson Foundation to further help support and empower young people.

All profits from the label will go towards the foundation, which was started by Hector’s mother Dorothy and another sister Antoinette Sithole.

The foundation’s work focuses on rehabilitating young people from broken families as well as orphans, and inspired by the childhood story of Dorothy, who herself was an orphaned at the age of 10.

“The idea behind the foundation is to keep the memory and legacy of Hector Pieterson for generations to come,” says Sithole.

“Our mission is to uplift youth who are involved in different projects and initiatives so that they can inspire change,” says Mbatha, whose vision for the brand has not changed since its inception.

“The youth must come up with their own ideas to create jobs, not just to make money.”

The Hector Pieterson brand will not be confined to South Africa only. Once the label becomes successful locally, Abasha plans to market it overseas and make it available for online purchase as well.

“The struggle of apartheid is understood by people around the world and is recognised globally, as there are countries who have overcome similar trials and struggles for freedom,” says Mbatha.

He also makes it clear that the label is not meant to be associated with June 16, 1976 or youth month for that matter.

“The store will be an on-going, independent commitment to uplift the youth,” he says. “It will be a reminder to all South Africans of the sacrifices that were made for them to enjoy their democracy.”

If all goes well with the store and the foundation, Abasha hopes to expand their operations towards designing school uniforms as well. All sales of uniforms made from schools that buy from them will be generously matched by Abasha in the form of donations to disadvantaged schools.

The Hector Pieterson fashion brand will showcase its newest items of fashion and accessories at this year’s South African Fashion Week from 30 August to 2 September. Items from the store can also be purchased during the event at the pop-up store at Sandton City.

Clothes from the label will also feature on the big screen. Veteran director Faith Isiakpere, a former senior producer at the BBC and filmmaker, approached Abasha last year to provide some of the wardrobe for her upcoming musical Cry for Love, a film inspired by the 2008 xenophobic attacks in South Africa.

The clothes can be seen worn by well-renowned local artist Yvonne Chaka Chaka and actor Leleti Khumalo in the film. 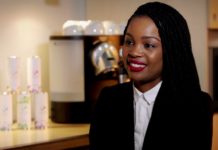 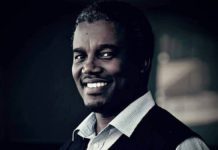