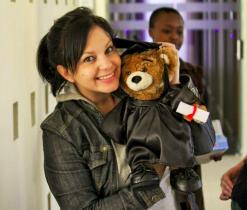 One of the furry young teddy travellers, who’ll be spreading the word in as many destinations as possible, with an admirer.
(Image: Teddy Travels) 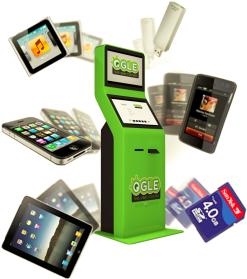 The Ogle kiosk offers free educational content that can be downloaded to any mobile device.
(Image: Ogle Media)

With this quote, Ogle Media welcomed guests to its Teddy Travels Bon Voyage Party at Cape Town’s Protea Fire and Ice Hotel on International Nelson Mandela Day, 18 July. Teddy Travels is a great idea, but the concept behind it is even better: free take-away educational content saved to mobile devices.

It is commonly agreed that in the modern world, with its knowledge-driven economies, education is crucial. But in South Africa, education is in crisis. The biggest slice of the national budget goes to education, yet the sector is reeling: schools in Limpopo spent the first half of the year without books; teachers are accused of spending little time in the classroom; there are still schools under trees; resources are few and far between, especially in rural schools.

Against this background, South Africa’s spending on education continues to grow. Finance Minister Pravin Gordhan allocated R207-billion (US$25.4-billion) to the sector for 2012/13, with projections that this may rise to up to R236-billion ($29-billion) over the next three years. Basic education received R152.1-billion ($18.7-billion) – 15% of the national budget.

But even with this spending, the education department is running to catch up, and there is not much extra cash for computers. Access to technology is inadequate, particularly in disadvantaged schools and rural areas. Not everybody has a computer, and data costs are prohibitive.

But on the upside, an estimated 27-million people under the age of 35 have access to mobile phones. Mobile is unquestionably the best platform to reach learners and to distribute educational content, Edwards says.

With this in mind, Ogle kiosks were born. The kiosks offer free access to downloadable educational content.

“We deliver content to pupils at no cost,” explains Edwards. This content is available on a variety of platforms – Ogle take-away content kiosks, internet, mobi, and mobile apps. “Ogle educational kiosks can provide pupils, staff and stakeholders with all the educational content they can ever want in seconds, absolutely free.”

The idea is to set up a kiosk in a school, to which the staff and pupils have access. They can download the content they need, save it to their device of choice, and then use it whenever and wherever they need.

In return, the school can use the kiosk to generate some income with extra utilities such as electricity and airtime purchases; fast-moving consumer content such as music, movies, ringtones and wallpapers; and low-cost financial services to parents, pupils, teachers and other community members. The school can charge a fee for this value-add use of its kiosk.

“Schools use the revenue generated by the kiosks to pay for the operating cost and the capital costs of the kiosks. This self-sustaining solution can propel learners into our interconnected knowledge-driven era,” says Ogle. Participating schools get training and support from Ogle, helping them to operate sustainably over the long term as social enterprises.

The touch screen kiosk is simple to use. Users log in, fill their basket with the content they need, select a device to collect the files – such as a cellphone, MP3 player, flash stick, memory card, removable hard drive and portable media player – and download it rapidly without incurring any data costs. Then they remove their device, and can view their content anytime, anywhere on other platforms, including mobile phones, desktop computers and laptops, iPods and MP3 players, and DVD players with USB ports.

Content on the kiosks is updated via satellite so it doesn’t matter if schools are in remote locations. They just require power, which can be solar power.

“Unesco believes that ICT can contribute to achieving universal education worldwide, through the delivery of education and training of teachers, improved professional skills, better conditions for lifelong learning, and the potential to reach people outside the formal education process,” says Ogle.

Its solution is not simply a hand-out, but is a hand-up. Adding to its long-term view, information is also available on health, career guidance, tertiary study advice, skills training, sport, nutrition and entertainment, so that pupils can get the information they need to make informed decisions about their future careers, lifestyles and personal advancement.

Edwards says that at present, the kiosks are undergoing software integration, and the first one will be up and running, with all the software working seamlessly on a single unit, within the next two months.

A bunch of teddy bears – 10 in all – are taking the Ogle kiosk gospel further. On their travels, they will spread the word far and wide, and raise funds to get kiosks into disadvantaged schools.

The teddies each have a name and a history, and are going on their gap years. They each carry with them a passport and an information pack, and will travel with chaperones around the world. Their travels will be documented for their friends back at home, on Facebook and Twitter and other social media platforms.

Each teddy will spend a minimum of 48 hours with each chaperone, who will talk to people about Ogle kiosks wherever they are – be it at business gatherings or backpackers lodges. They will be able to make donations or sponsorships easily and efficiently online, of any amount, in various currencies through GivenGain. All funds are managed by the Heart Charitable Trust.

And then the teddy will be handed to another chaperone heading somewhere new. The furry travellers will accept invitations from the rich and famous, politicians, film and television stars, musicians and others. After a year of travel, the teddies will head back to Cape Town – hopefully filled with tales of adventure and derring-do, and loads of sponsorships.

Edwards will also be taking some of the teddies with him to Washington DC on August 30, where he will present a paper at the Mobiles for Education conference. Edwards and the teddies will also visit New York. Another teddy is setting off courtesy of Get Away magazine.

Mobiles for Education is an international alliance based in Washington DC and is supported by USAID, the United States Agency for International Development. The alliance’s objectives are to promote affordable access to low-cost technologies in education, as well as spread the awareness of the tools that are available.