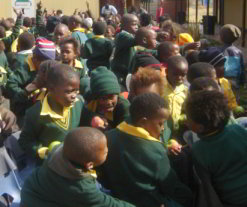 The School @ the Centre of Community
project aims to nurture leadership in
principals and get businesses involved
in addressing education challenges at
community level.
(Images: City of Joburg)

The award was in recognition of the development of a programme called School @ the Centre of Community, which brings business leaders and school principals together in a co-learning and co-action agreement.

James Eckley, Symphonia’s national projects manager, says the approach not only pairs business and education but encourages communities to become involved with their local schools.

According to Symphonia’s website, the project rests on the belief that many of the social challenges in South Africa are directly related to the breakdown of communities.

“Schools are the centre of communities. We know pupils will do well if communities support them in their education,” says Eckley.

Symphonia, which concentrates on impoverished areas, has taken its methods to 21 schools in Cape Town, 16 in Johannesburg and four in Durban and, says Eckley, the project is growing by the week.

But there is a long way to go – it is estimated that there are about 25 000 under-performing schools in South Africa.

According to Eckley the crisis in education is an indication that many existing projects are not achieving the desired results because the immense challenges principals face have demotivated them and they have lost their drive and passion.

As a result, he says, it is not sufficient to put principals through training programmes.

Instead, the business approach of providing each one with a partner and surrounding her or him with an actively engaged team is more effective.

“Symphonia’s method gives the school principal a sense of support, ignites leadership within him or her, and encourages resourcefulness,” he says.

In Symphonia’s experience, the best people to support principals are South African business leaders who are experienced in and equipped to implement organisational change.

But the community, too, has a responsibility. “It takes a village to raise a child,” says the old African proverb.

Parents and communities must become involved

It is estimated that children spend just 20% of their time in school and the rest of it within their community. For this reason the NPO urges parents and communities to become involved in their children’s education, as parents, Symphonia maintains, are a child’s primary teachers.

Among the factors Symphonia believes will lead to success are:

However, the organisation emphasises that communities should not expect a quick fix and that it can take between three and five years to transform the situation in a school.

Blue Dart and the CSR award

Blue Dart Express, a courier company based in South Asia, is part of the global DHL group.

The company established the corporate social responsibility (CSR) awards as a means of recognising institutions involved with CSR programmes in various industries. The 2012 ceremony took place on 18 February.

According to Kerrie Brand, events manager for Symphonia, “The awards aim at assessing the extent to which CSR projects have succeeded in integrating with corporate functioning; the responsiveness of these projects to the needs of different stakeholders and the development of innovative models to fulfil social responsibilities.”