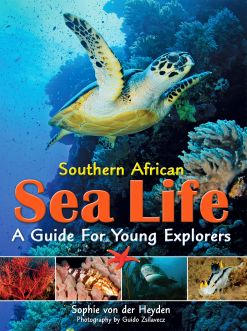 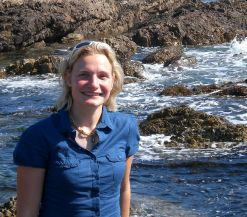 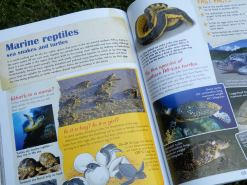 The full-colour 88-page field guide is filled with beautiful photographs, interesting facts and easy-to-understand descriptions that bring to life the beauty of marine plants and animals such as seaweeds, molluscs, fish, seashore birds, and marine mammals. 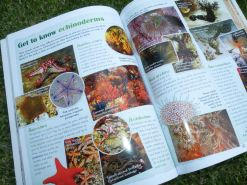 Guido Zsilavecz, a respected marine photographer contributed most of the photographs in the book.
(Images: Wilma den Hartigh)

A marine biologist from Stellenbosch University has authored a children’s book on Southern African sea life to teach young people about the importance of oceans and inspire them to explore marine environments in Africa.

The author, Dr Sophie von der Heyden, has a PhD from Oxford University, lectures in marine biology and genetics at Stellenbosch University and has published widely on marine biodiversity and conservation.

She says that although there are numerous marine guides in South Africa, these are only suitable for adult readers.

“There was nothing specifically geared towards children,” Von der Heyden explains, adding that she wanted to write a book that would be informative for both children and adults.

“I hope it will fascinate and educate children, and that they will discover the joys of exploring,” she says.

Von der Heyden received a grant from the Academic and Non-fiction Authors’ Association of South Africa (Anfasa) to complete the field guide.

She is one of eight emerging or established writers who are supported through Anfasa’s grant scheme for authors, which aims to support interesting academic and non-fiction projects.

The field guide, Southern African Sea Life: A Guide for Young Explorers, is available in most local bookshops, online at Exclusive Books or directly from the publisher, Random Struik, for only R100 (US$12)

The full-colour 88-page field guide is filled with beautiful photographs, interesting facts and easy-to-understand descriptions that bring to life the beauty of marine plants and animals such as seaweeds, molluscs, fish, seashore birds, and marine mammals.

The book also explains concepts such as ocean currents and the importance of protecting oceans and marine habitats.

The author included a holiday guide section which focuses on popular areas of the Southern African coastline such as the West Coast, the Wild Coast, Namibia and Mozambique. This section provides an overview on the marine life and environments that visitors are most likely to encounter when exploring the coastline around each of these areas.

“I’d like people to use this section to get to know their favourite holiday destinations,” she says.

There is also a chapter on careers in marine science and the valuable work of marine scientists.

“I hope the book will inspire future generations to become biologists, oceanographers and conservationists working together to preserve our amazing oceans,” Von der Heyden says.

“It shows just how wide ranging the field is. Marine biology isn’t the only career; there are also others such as marine chemistry, aquaculture and oceanography.”

She says it is important that children develop a love for oceans and marine life. A resource such as this vibrant field guide, as well as input from parents, can help to create early awareness about the value of oceans.

Von der Heyden says she has her older brother to thank for her interest in all things marine. “He is 10 years older than me, but he got me interested in fishing when I was a child,” she recalls. “Together, we explored muddy ponds and this is what sparked my interest.”

The idea for the book came about a few years ago when Von der Heyden was on a field trip, exploring the rock pools of Margate on the KwaZulu-Natal north coast with two students and her young daughter.

“While we were collecting samples I saw a dad trying to answer the questions his sons were asking about the things that they found in the rock pools,” she tells, adding that the harried parent was running out of creative answers.

“Kids love the sea so I started to think about the value of an informative and fun guide that was age appropriate.”

The guide provides parents of young children with answers to such questions and older children who can read can browse through the book by themselves to find out more about their rock pool discoveries.

There are many interesting facts contained in the book. Even adults might be surprised to learn that a sea star feeds by pushing its stomach out through its mouth and placing it directly over its prey, octopuses are quite clever, and that the yellow-bellied sea snake is the only marine snake found in the oceans of Southern Africa.

“What makes the book stand out is the photography,” Von der Heyden.

Her favourite two-page spread is one of sea stars, brittlestars, sea cucumbers and other types of echinoderms (animals that have spines and bumps covering their bodies).

“The photographs are simply beautiful.”

Von der Heyden worked with Guido Zsilavecz, a respected marine photographer from the Southern Underwater Research Group who contributed most of the photographs in the book.

Zsilavecz is an experienced underwater lensman and has published identification guides on fish and sea slugs. Von der Heyden enjoys the fact that he has captured some of the smallest aquatic and marine species.

The author explains that it was important to compile a highly visual book with excellent photographs that would make it fun for children to identify species.

Von der Heyden says that one of the most challenging aspects of the writing process, which started in 2010, was to explain scientific aspects of the marine environment in language for children, yet ensure that the book maintains its scientific integrity.

“Writing for kids has been a real eye-opener and huge fun,” she says. “I come from a background of academic writing, and it was tricky to explain complicated concepts without losing detail.”

Fortunately she could consult with her two young children for an honest opinion about what she was writing. “They were excellent sounding boards, and I regularly read sections to them to see if it was accessible.”