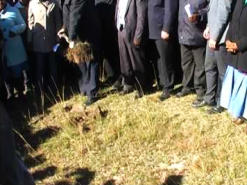 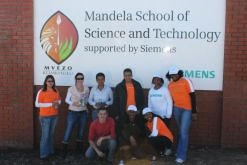 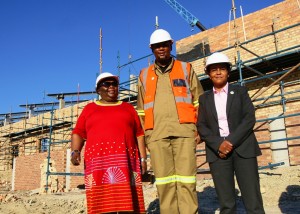 A school in Mvezo, the small Eastern Cape village where Nelson Mandela was born, on the banks of the Mbashe River, is the place chosen by Siemens, the global electronics company, to sponsor a school.

Mandela School of Science and Technology, a joint initiative between the company, the Mvezo Development Trust, and the Mvezo Traditional Council, will provide secondary education and training in science and technology. It will consist of three double storey buildings that will include a library, a computer room, a recreation hall, and a resource centre. All students interested in studying mathematics, technical and commercial subjects will be welcome to apply.

The school will be built using environment-friendly technologies. Solar panels will be used for power and the building will have energy efficient lighting. There will be boarding facilities for pupils.

During a site visit to the school in April, Eastern Cape Premier Noxolo Xiviet welcomed the project. According to the provincial education department, the matric pass rate was a low 40% in the 1990s but improved to 68.3% in 2005. Although there has been a significant change, much more can be done.

Dedication from the government and teachers should be the main priority to improve the quality of education in rural areas such as Mvezo. The Mandela School of Science and Technology is one step towards this, and its primary objective is to provide much-needed skills and development opportunities to Mvezo. “It is a highlight for us as a province and as a department because it supplements the billions of rands that we are already ploughing into the development of our schools,” said Pulumani.

Students will undertake programmes that will help strengthen their technological skills. The school will also offer employment to the local community, such as in maintenance. It is expected to be ready for teaching at the start of the academic year in 2014.

Poverty is one of the biggest challenges facing South Africa, and it has a huge impact on many children. The government feeding scheme is helpful, but it only consists of one meal a day, which is not enough to feed all children properly.

Schools also lack facilities such for proper sanitation. Unicef, the UN Children’s Fund, estimates that about 27% of public schools have no running water, 78% are without libraries, and 78% have no computers. Other pertinent issues are the lack of academic resources for poor children, and parental participation – parents’ participation in their children’s schooling is important for successful education, as it is believed to improve academic skills and enhance children’s social and interpersonal relations.

The World Economic Forum recently ranked South Africa last in the quality of its science and maths education. Training or lack thereof of its teachers is a major factor in poor education levels. A study done by the independent non-profit organisation, Jet Education, showed that in 2011, only 53% of Grade 4 teachers answered a Grade 6 simple maths question correctly. Its study was done in 268 schools in eight provinces, excluding Gauteng.

The poor performance of teachers is a major reason for the underperformance of many students, according to Open Equal, a supplier of news, resources, networking opportunities and training for teachers around the world. According to the education department for example, in KwaZulu-Natal, more than a quarter of science teachers were under-qualified to teach the subject.

Research done by Servaas van der Berg and Nicholas Spaull, from the department of economics at the University of Stellenbosch, indicated that rural South African schools performed worse than those from other low income African countries. When ranked by the performance of the poorest, South Africa came 14th out of the 15 sub-Saharan countries for reading and 12th for maths.

The university’s economics department drew up a number of factors to be considered to improve the quality of education, from a report for the National Planning Commission 2011:

Schools need to select teachers together with management to fulfil roles as leaders of curricula. This is to ensure that students have a learning environment that is conducive.

The use of technology in classrooms will help to develop and improve pupils’ literacy and numeracy skills. The Department of Basic Education has also come up with ways to improve pupil achievement by 2014 by means of the Annual National Assessments. These tests will verify that every child in every school is developing academically in his or her specific grade.

Regarding higher education, Minister Blade Nzimande said that the department came up with a strategy to improve the quality of teaching in the further education and training (FET) sector. It included short term interventions such as appointing qualified chartered accountants as chief financial officers at 43 of the 50 FET colleges. The government has also committed itself to establishing three new universities that will help expand educational capacity in South Africa.