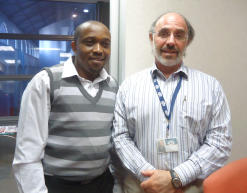 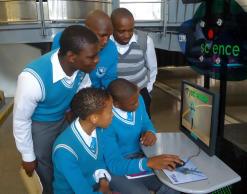 Sci-Bono helps to stimulate children’s natural curiosity and focus it on science. 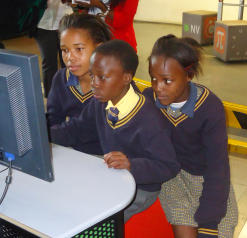 The Sci-Bono Discovery Centre, South Africa’s largest science centre, is aiming to boost education in mathematics, science and technology by invoking the inherent curiosity of children, and teaching them new ideas and concepts while they play and interact with the many exhibits that it hosts.

Established by the Gauteng Department of Education and the private sector in 2004, the centre seeks to address the scarce skills needs of South Africa by contributing to the effective delivery of quality maths, science and technology education in all schools in the province.

According to Sci-Bono CEO David Kramer, science centres are a rather recent phenomenon, with the first one taking shape in San Francisco in 1984.

Known as the Exploratorium, it is one of the four biggest centres of its kind in the world, and was set up by physicist and educator Frank Oppenheimer as a way through which ordinary citizens could keep in touch with the latest advances in technology. Oppenheimer was no stranger to advances in technology – his brother Robert was one of the developers of the world’s first nuclear weapon.

Since those early days, Kramer said, there were now over 30 000 science centres and museums across the world, and that there is hardly a major city that does not have one.

He pointed out that the difference between science museums and science centres was that centres were not about exhibitions that people merely looked at, but were filled with interactive exhibits, made so that visitors could engage with them and learn new things.

“There are 35 science centres in South Africa, but Sci-Bono is the flagship,” he said. They range in sizes from huge warehouses to a small room.

Kramer said that Sci-Bono had a programme of activities and projects taking place throughout the year, and its outreach programme targets schoolchildren who are unable to travel from outlying areas into Johannesburg.

Programmes include a Rocket Science Club where pupils learn to design, build and launch rockets that are capable of flying several hundred metres into the air; and a robotics programme, whose participants have even competed at international level.

While working on these projects, Kramer said, the children were guided and mentored by “professionals and not teachers”.

Similarly, the guides who take the children around the various exhibits are young BSc graduates with a passion for science and technology – ensuring that children learn while having fun.

Sci-Bono is unique, given the relationship the centre has with the Gauteng Department of Education, in that it also had a big role to play in curriculum delivery and teacher training in the fields of maths and science.

The centre also runs a supplementary tuition programme in 137 sites across the province, where schoolchildren can go to learn, with highly skilled teachers from some of the province’s leading schools being brought in on the day to teach.

“Over 80% of the schools that come here are from a previously disadvantaged environment, we provide them with free admission and transport,” Kramer said, adding that while wealthier schools were asked to pay for admission fees, no cash-strapped schools would be turned away.

This was possible because of funding from the provincial education department, and means that Sci-Bono is not reliant on admission fees for survival.

Another unique point is that Sci-Bono has an attached career centre.

“It is a full service career centre that provides guidance and counselling,” Kramer said, adding that it was one of the few places where students from disadvantaged backgrounds could undergo free psychometric and aptitude testing.

In this way, the centre not only directed the curiosity of children into the world of maths and science, but also helped improve the flow of potential candidates studying these subjects at a tertiary level.

Kramer said they expected to have 206 000 visitors to the centre over the course of the year, while also reaching out to an additional 150 000 pupils through their various outreach programmes.

“We are not just a conventional science centre, but we are also the control room for maths and science in Gauteng,” he said.