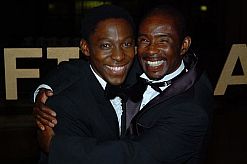 Wandile Molebatsi, who plays Muntu
Ndebele in A Million Colours: e’Lollipop
II and the real Ndebele. 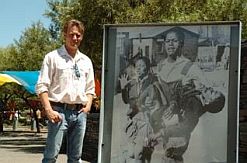 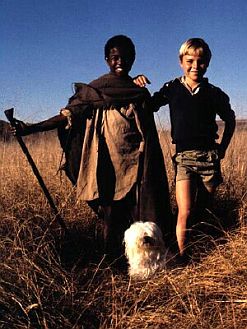 The young Ndebele and Knox portrayed
on the poster for the original e’Lollipop.
(Image: e’Lollipop)

The film A Million Colours: e’Lollipop II, depicting the lives of child actors Muntu Ndebele and Norman Knox during the years following the success of their iconic 1975 South African box office hit e’Lollipop, will be released locally in April.

The two child stars of e’Lollipop, which movingly portrayed the friendship between a white and a black boy during the height of apartheid, led vastly different lives after the movie’s success.

Ndebele descended into violence, crime and debauchery as he struggled with life after the movie, while Knox, conscripted into the army, refused to fight for the apartheid government and tried to spread the notion that all races can live happily together.

Molebatsi said: “Muntu went through some hard times, which I shared in my own experiences. Some of the scenes were very emotionally charged and they took their toll on me, but the crew and actors were so professional.”

“It’s a huge step forward for the local film industry,” said Hartman. “This film is on another level and can stand up to any production, locally and internationally.”

A Million Colours was filmed on location in and around Johannesburg and in Kwazulu-Natal.

According to the film’s Facebook page, it is “an inspiring true story of danger, adventure, romance, betrayal and redemption…set against the turbulent background of a nation in crisis.”

Peter Bishai, the Canadian director of the movie, said: “The script came through Muntu’s experiences as he walked me through his life and the the places which had impacted on him the most.

“He’s a natural story-teller and the movie has every ingredient for success – romance, intrigue, suspense and more.”

Ndebele said that he was in trouble throughout much of his life and asked God for a second chance, which he has received as a reformed addict.

Turning a wasted life around

It all started when Pieterse decided to contact Ndebele and Knox as he wanted to turn e’Lollipop into a DVD.

He was able to find Knox but their search for Ndebele led them to a derelict Hillbrow flat where they found a drug riddled, sick man of 43kg.

This meeting between Knox and Ndebele after so many years inspired Ndebele to kick the drug habit at last.

His healing process involved contributions by both to a journal that documented everything Ndebele went through since they last met as children.

This journal is what spawned A Million Colours.

Following years of a healthy diet, regular gym, encouragement and discipline, Ndebele has made a full recovery.

He said: “Now that I’ve reconnected with Norman that lost part of me is returning. It was never a ‘made’ friendship, it was a natural bond which transcended racial boundaries. God has used him to save me just as I in e’Lollipop saved him.”

The movie is yet to be released in Ndebele’s home country but has made waves overseas and enjoyed attention at multiple prestigious festivals.

It was also selected for the Pan African Film Festival that took place in Los Angeles in the US from 9 – 20 February 2012.