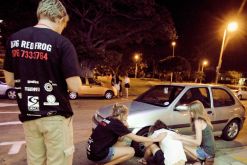 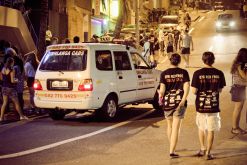 In addition to the orientation week parties, Red Frogs volunteers head out on a weekly basis for student nights when most young people are partying at clubs nearby, providing a safe walk home and any other assistance needed.
(Images: Red Frogs SA)

Wild university parties can be fun and exciting, but for young impressionable first year students drinking and partying too hard can have devastating consequences and may lead to life-altering behaviours.

Red Frogs is aimed at people between the ages 15 and 25, and was born out of the recognition that the culture of young people is dominated by partying and excessive consumption of alcohol and other substances which may land them in dangerous situations.

The aim of the organisation is to provide a positive peer presence in alcohol-fuelled environments where young people gather such as matric dance after-parties and university bashes. Its mission is to educate young people on safe partying behaviours and promote and provide non-alcoholic and diversionary activities that engage young people in these environments.

The initiative was started in 1997 by Andy Gourley after seeing the amount of fatal accidents that occurred as a result of binge drinking and the use of illicit drugs during Australia’s schoolies week where thousands of Aussie school-leavers celebrate the end of school.

Gourley realised the need for a designated sober person at the massive drinking parties and recruited his friends to help. Initially, all they did was to walk drunken students home, but today the programme includes handing out free pancakes, cleaning up their hotel rooms and giving them free bottles of water.

The programme has become renowned for the support it provides not only to school leavers, but also to university students, party and festival goers, event managers, sporting groups and musicians in Australia, New Zealand, the UK, Canada and South Africa.

The Red Frogs crew areeasilyindentified by their black t-shirt with the organisation’s logo that they wear when they are on campuses or at events.

The organisation depends on financial donations from churches, businesses and individuals to run the programme. Red Frogs has also collaborated with community-orientated organisations that provide resources such as bottled water, pancake mix, vehicles and other resources.

“Right from big business to a single mom who cooks a meal for our volunteers – the whole community can get involved in Red Frogs,” said Basson.

People who want to get involved in Red Frogs activities should visit the organisation’s website www.redfrogs.co.za where all the volunteer opportunities are listed.

In South Africa, a similar informal programme was started by a group of young people in 2005 where volunteers helped out matric students in the small holiday town of Ballito in Kwazulu-Natal. When they heard about Red Frogs in Australia, they decided to collaborate and in 2008 Red Frogs South Africa was launched in the town.

“We’ve learnt so much from the Australians’ experience and we have contextualised it to be relevant to our local setup,” said Red Frogs South Africa PR manager Jesse Basson.

“The programme is important because most of these young people are on the brink of making life-changing decisions. They are going to study, work and travel, and start their lives as adults. Choices made in alcohol-fuelled environments can leave lasting consequences and we genuinely believe that if we can safeguard this generation during a season of their lives where they are vulnerable, we can safeguard our country’s future leaders.”

Many matriculants go on holiday without their parents for the first time and can find themselves in stressful situations with no one to turn to. Red Frogs is able to get medical assistance to those who need it, liaise with the police and security and look out for matriculants with their interests at heart.

By providing these services the volunteers earn young people’s trust and respect, making it easier for them to reach out to the Red Frogs when they find themselves in trouble or when they are facing a challenging time, added Basson.

Some of the obstacles the Red Frogs team has come across in their work include trying to curb the use of drugs and violent breakouts, and having to deal with medical crises. At most parties and festivals, these challenges can be addressed through collaborating with the community, police, security companies and emergency service providers.

“The best solution we have found is, for example in Umhlanga, where the Urban Improvement Project which provides extremely efficient, centralised management of all the factors involved, does an amazing job of handling the matric holiday dynamics in the town,” explained Basson.

Red Frogs’ presence on university campuses is an extension of the relationships it has built with matric students during their end of year holiday. During university orientation weeks the Red Frogs set up tents on campus to connect with first year students.

Arriving at university can be intimidating and a daunting experience for new students which makes the Red Frogs a familiar and trustworthy presence for many of the young people who met the crew during their school leaving parties.

In addition to the orientation week parties, Red Frogs volunteers head out on a weekly basis for student nights when most young people are partying at clubs nearby, providing a safe walk home and any other assistance needed.

“Whether it’s at a university party or a music festival, our Hydration Stations or Chill-Out Zones are always a huge hit,” explained Basson. “They are a great place for young people to take a break from the loud music and hectic partying scene. Our volunteers hand out free water and pancakes, and we offer a quiet place to sit and catch your breath.”

The organisation also plans to increase its visibility at music festivals across the country this year. After a successful run at the Oppikoppi music festival in 2012, Red Frogs will be returning to the festival again in 2013 and will set up tents at Splashy Fen, Rocking the Daisies and Fun in the Sun music festivals as well.

“Our role at festivals is to help the festival organisers by being the eyes and ears out in the crowd, linking festival goers with the services provided by the organisers.” 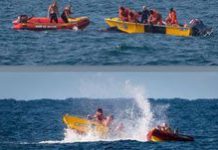 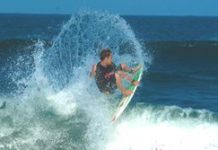 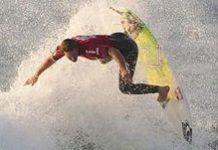 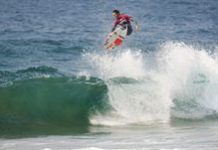